Travelocity
Booking.com
Orbitz.com
View all 10 deals
* Prices are provided by our partners, and reflect average nightly room rates, including taxes and fees that are fixed, known to our partners, and due at time of booking. Please see our partners for more details.
ncairns96
Glasgow, United Kingdom
911

Myself and my family are just back from Kavos, we stayed in the Kavos Plaza for 7 nights.
We thought the place was nice, very clean, the pool area was lovely, the rooms were clean but basic, a few minor issues regarding the room, we didn’t complain as it wasn’t a huge deal, but something that can be improved. The bathroom was a little run down, the door didn’t shut properly, the shower is tiny so the bathroom floods when the shower is on and the drain smells a little, the room had air con but it was very poor, it was 34 degrees when we visited so we were boiling in the room when getting ready.
There was a DJ during the day, he just played the same music, which was head bursting after a while. There was no Greek night and there was not entertainment which we were expecting.
The staff were friendly but didn’t associated much with us, we got questioned one day about not eating chips which we had paid for, I thought it was quite rude.
The food at the bar was really good, we got a Greek salad nearly every day which was amazing and the cocktails were brilliant! Would recommend the frozen strawberry daquiri.
Overall, we had a lovely stay, these were minor issues that the hotel can improve on, we would definitely stay here again.More Taking safety measures
We compared the lowest prices from 11 websites 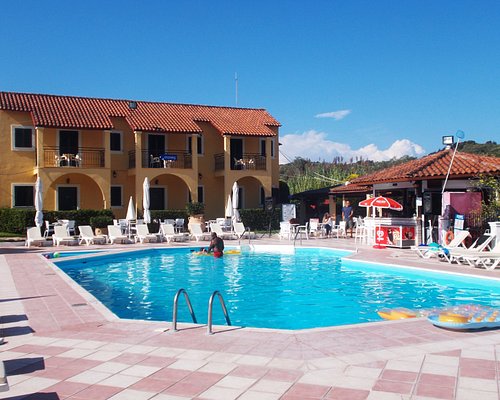 Hotels.com
View deal
Booking.com
US$35
Priceline
Agoda.com
US$35
View all 12 deals from US$35
431 reviews
0.3 km from Kavos Plaza
We compared the lowest prices from 12 websites 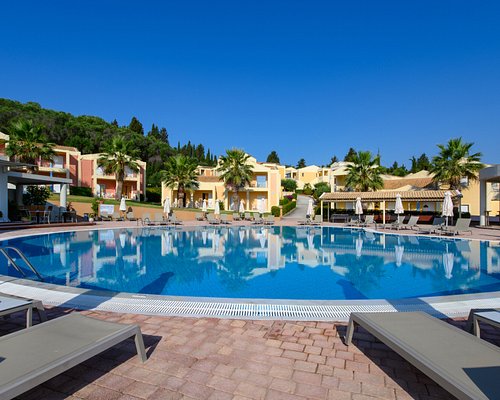 Olympion Village Hotel
US$47
Booking.com
View deal
Free cancellation
Expedia.com
US$42
Hotels.com
US$42
Priceline
US$49
View all 14 deals from US$42
404 reviews
1.0 km from Kavos Plaza

We are just home since Wednesday from a family holiday (teenager & 20's) and our stay in the Kavos Plaza Hotel was fantastic. We stayed in the executive suite which was amazing and so spacious. Brilliant air con and a safe free of charge. Hotel staff are so friendly and make sure everyone has an enjoyable stay. Rooms are cleaned spotless everyday. There is so many sunbeds in the hotel that there is no morning rush which was a major win factor for us! Great food & drink available in the pool bar. Very close to the strip but yet you dont hear the lively nightlife and a short walk to the beach.
Definitely the nicest hotel in Kavos & we cannot wait to return again!

This review is the subjective opinion of a Tripadvisor member and not of TripAdvisor LLC.
yourkshireblonde
barnsley
41
Reviewed 7 August 2019 via mobile
Brilliant holiday

Really is a five star hotel ,the staff are friendly and the food is excellent .Rooms are cleaned every day with fresh towels and had air con and safe in room free of charge .Defiantly the best place to stay if visiting Kavos

This review is the subjective opinion of a Tripadvisor member and not of TripAdvisor LLC.
mathew427
Birmingham, United Kingdom
4621
Reviewed 6 August 2019
SUPERB

we could not fault our week stay here in july,what a lovely peacefull hotel,5mins from the beach,and 5 mins to the main strip if you want to go,all staff where brill,including the cleaners working so hard every day,roll on next year

This review is the subjective opinion of a Tripadvisor member and not of TripAdvisor LLC.
Truthhurts95
11
Reviewed 30 July 2019
Perfect

This will be the 4th time I have stayed here. Me and my friends love it. Close to the beach/water sports. 5 minute walk from the strip. Clean friendly hotel where there are enough sun beds for everyone, decent size pool and good stocked up bar! The staff couldn’t be nicer and the rooms are clean and reliable (just make sure your balcony door is properly shut otherwise the air con won’t work). Highly recommend.

This review is the subjective opinion of a Tripadvisor member and not of TripAdvisor LLC.
Tash R
1
Reviewed 25 July 2019
Best Holiday

My friends and I came here for our first holiday last week and honestly had the best experience we could have possibly hoped for! Hotel was absolutely gorgeous, the rooms were very spacious and had free air con, WiFi, a kettle and a very good bathroom. The staff were all charming and made us feel very welcome, they even helped us with transfers to the airport and gave great advice on where to eat. The location is great, it’s about a 2 minute walk to local shops and restaurants, 5 minutes to the beach and under 10 minutes to the main strip, meaning it’s close enough to be right in the centre of everything but far away enough that you can sleep without the music and genera noise. We all felt so safe and couldn’t have asked for a better experience. Would 100% recommend to young people looking for a cheap drinking holiday but also for older people looking for somewhere lively and friendly. Thank you so much!!

This review is the subjective opinion of a Tripadvisor member and not of TripAdvisor LLC.
View more reviews
PreviousNext
123…
<script type='text/javascript' crossorigin='anonymous' async onerror='__scriptLoadError(this,true);' src='https://static.tacdn.com/assets/eDoFHZ.127f77b4.es5.js' data-rup='eDoF