Plus and minus - Intercity Vinhedo

US$62
US$29
View deal
SAVE US$33
Free cancellation until 21/04/16
Hotels.comUS$35
FindHotelUS$35
Prestigia.comUS$62
View all 14 deals
* Prices are provided by our partners, and reflect average nightly room rates, including taxes and fees that are fixed, known to our partners, and due at time of booking. Please see our partners for more details.
tucano71
Bologna, Italy
295122

The hotel is located in a quite area, just out of the motorway exit in Vinhedo, the structure is quite modern and the rooms are comfortable and not noisy. Check-in/out is quick and te price reasonable. Main issue is a/c position - blowing cold air to the bed, so you will sleep without, and it is hot...for breakfast the food variety is low, there is a basic gym and a small swimming pool.More

Hello,
Thank you for your review.
We would be glad to see you again.
Have a good day!

Report response as inappropriateThank you. We appreciate your input.
This response is the subjective opinion of the management representative and not of TripAdvisor LLC
See all 397 reviews
Nearby Hotels 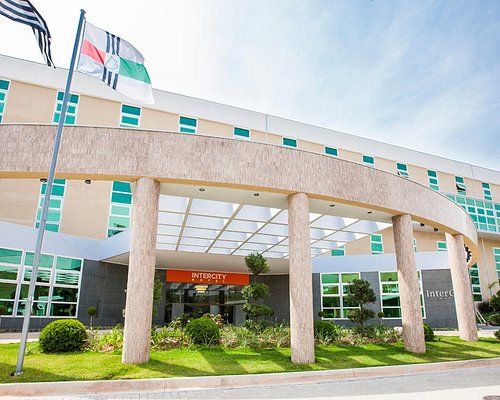 Breakfast included
Hotel Vilagio D'Italia
US$31
Booking.com
View deal
Free cancellation
Hotels.com
US$29
StayForLong
US$42
FindHotel
US$29
View all 17 deals from US$29
80 reviews
1.4 km from Intercity Vinhedo
We compared the lowest prices from 17 websites

Hotels.com
View deal
Free cancellation
Reserve now, pay at stay
Booking.com
US$30
Expedia.com
US$30
FindHotel
US$30
View all 12 deals from US$30
65 reviews
10.3 km from Intercity Vinhedo
We compared the lowest prices from 12 websites
Pousada Fazenda Sant'Ana

I stayed here luckily only for 5 days. It's located in a industrial area, so for me really close to work.
Hotel rooms are quite new and in great condition. Fitness area was poor with 2-3 machines, bad condition and only Portuguese language. Speaking of that :-)
In the hotel only one person who speaks a little bit English. Very difficult to order food at night. There are no option outside the hotel without using a taxi or rental car.
Also with other questions I had, they answered with 'Nao Inglesh' and I had to wait for them to call somebody who spoke a bit English. That is unbelieveable to my if you open a hotel in an area were a lot of international companies are locared.
Also the menu was limited to 4 main courses and some sandwiches.
If you need to stay in the area for more than 3 days I would highly recommend that you go to other hotel in Campinas for example.

Thanks for your comment.
We would like you to know we are making improvements in our hotel and we hope to have you back again.
Have a great day!

Report response as inappropriateThank you. We appreciate your input.
This response is the subjective opinion of the management representative and not of TripAdvisor LLC
769wilfriedl
Untermuenkheim, Germany
15
Reviewed 24 May 2017
Quiet simple hotel in Business Park between Sao Paulo and Campinas

Less than 3 year old hotel with poor standing and service. Hotel already really needs a lot of renovation, especially bathroom interior and room wall paper. Restaurant service also rather poor; no bar, very limited room service. No other possibilities to eat or drink nearby as the location is in an industrial park outside Vinhedo. Although there are some international companies in this business park the hotel standing is not ok for international business travellors.

We would like to thank you for your comment.
We apologize for the inconveniences, the Hotel Manager will soon hear about your suggestions regarding safety, wi-fi and service.
We would like you to give us another chance to reverse the situation so you can have a new opinion on the hotel.

Have a nice day!
Rodrigo Domiciano

Report response as inappropriateThank you. We appreciate your input.
This response is the subjective opinion of the management representative and not of TripAdvisor LLC
Matt-W1973
West Yorkshire, United Kingdom
4111
Reviewed 15 March 2017
Disappointed

I was recommended this hotel by a local company for a 3 night business trip.
The hotel could be nice, but is lacking in the final touches.
The staff were as helpful as they could be, but spoke very little English. There was no English menu, but this did not detract from the food which was quite good.
There is no bar in the hotel, although you could get a drink out of restaurant hours from reception if you wished to take a drink to your room.
The room was quite basic despite it being a 'superior double room' and the bathroom was in need of some maintenance with the large 'flood' ceiling shower head having a broken pipe above therefore no water made it to the shower head, fortunately there was a wall mounted hand shower.
I wasn't too impressed when i was joined in the shower one night by a huge cockroach either!
The room did have a safe in, but this was of no use as it was locked.
In the corridor there had also been a large leak after one of the daily downpours and the walls were showing a lot of damp patches.
If work calls in this region again I would be venturing a little further into Campinas.

Room tip: Not one for you if you don't speak Portuguese
Ask Matt-W1973 about Intercity Vinhedo
Thank Matt-W1973

Thanks for your comment.
We would like you to know we are making improvements in our hotel and we hope to have you back in our hotel.
Have a great day!

Report response as inappropriateThank you. We appreciate your input.
This response is the subjective opinion of the management representative and not of TripAdvisor LLC
Gerhard M
Austria
15882
Reviewed 18 October 2016
not really international

This hotel should be an international hotel as it is located in one of the biggest industrial parks in the region. Reception personal speaks only partial English which makes it very hard to get support on any issue. Service in the restaurant is not able to speak any English word nor understand English. I was most disappointed that the menu card in the restaurant is available in Portuguese only! It took approx. half an hour until I got assistance to translate that I have the possibility to choose the meal. And of course the beer was served in a can - unbelievable. The breakfast as well is simple and I expected more for a 3 star business hotel. There is much room for improvement especially as the restaurant is very noisy in case of missing carpet or curtain. Everything is hard built which results in noise reflection.
Only plus is the room and bathroom which is ok for such a business hotel.

Room tip: try to get a room on the top floor.
Ask Gerhard M about Intercity Vinhedo
Thank Gerhard M

Dear Gerhard,
thank you for having stayed at our hotel and your reports.
We take all the providences that such facts are corrected.
we hope to receive you again.
Mike Silveira

Report response as inappropriateThank you. We appreciate your input.
This response is the subjective opinion of the management representative and not of TripAdvisor LLC
Paulo_MSP
MInneapolis
10448
Reviewed 2 February 2016
Good location for business trips in the region

This hotel is located near "via Anhanguera", a highway that connects Sao Paulo with Campinas and other major cities on the country side of Sao Paulo state. It is also near Vinhedo and the industrial district what makes it very convenient for business people in the area. There are no shopping area or restaurants near by at walking distance, you need a car to move around. The hotel is new and offers restaurant and a swimming pool what is very nice.
Check is was relatively fast (for BR standards) - the lobby is nice. Two elevators serving the floors. The room was good enough for a short stay, with a large flat screen TV and small refrigerator. Bed was comfortable, air conditioning quiet. The window was not closing properly so I could not open or completely close it. The window has blinder inside and is small, I prefer larger windows and that I could open fully and get more light and fresh air. Bathroom was good with a shower on the ceiling, unfortunately the shower orifices were clogged so I did not get a nice water spray. Breakfast was good. check out was fast (relatively speaking). Ample of parking are outside.
Wifi was free and reasonable.

Hello Paulo,
Thanks for your comment.
We would like you to have you back in our hotel.
Have a great day!
Mike Silveira

Report response as inappropriateThank you. We appreciate your input.
This response is the subjective opinion of the management representative and not of TripAdvisor LLC
View more reviews
PreviousNext
12…67