Good base to explore the region - Hotel du Nord

US$173
View deal
Free cancellation until 21/08/07
Reserve now, pay at stay
CheapTicketsUS$173
eDreamsUS$162
TravelocityUS$173
View all 11 deals
* Prices are provided by our partners, and reflect average nightly room rates, including taxes and fees that are fixed, known to our partners, and due at time of booking. Please see our partners for more details.
Chirp2lou
Victoria, Canada
7310

Good base to explore the region

Central location between the station and vineyards. A small town centre so always a short walk to restaurants, station, etc. Clean modern interiors and a great buffet breakfast. Lots of fruit and cereal options along with eggs, meat, cheese and yogurt. I really appreciated the nut and seed topping options and wonderful baked goods. This is a very quiet hotel and with a room on the street side we enjoyed listening to and watching life on the street as well as seeing the mountains and vineyards over the rooftops.More

We are happy to read that you enjoyed your stay.

We look forward to welcome you again in Aigle

Report response as inappropriateThank you. We appreciate your input.
This response is the subjective opinion of the management representative and not of TripAdvisor LLC
See all 85 reviews
Nearby Hotels

Expedia.com
View deal
Booking.com
US$126
Hotels.com
Priceline
View all 12 deals from US$126
115 reviews
4.4 km from Hotel du Nord
We compared the lowest prices from 12 websites 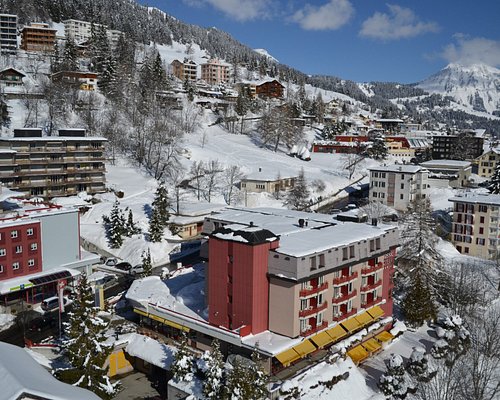 I arrived at the hotel, the staff was cold, I felt like I was bothering. Normally when we are greeted it is with a smile. But there I really feel to disturb ... She had her head tilted on her screen. She just printed the bill and gave me the key just saying that breakfast was until 10am ... The hotel is clean as to the room. The room of good is average. The toilet is very big but the bath tub needs improvement ... There is nothing to stand if you want to wash your feet ... But there is soap available. Then the bed was a little hard ... (but everyone is different ...) I slept well because there were blinds and a curtain that blackened the room. Simple but sufficient breakfast ...

We are happy to read that you enjoyed your stay. The Hotel has 5 floors :)

Report response as inappropriateThank you. We appreciate your input.
This response is the subjective opinion of the management representative and not of TripAdvisor LLC
Vujekvasyl
Warsaw, Poland
2543
Reviewed 26 December 2018
Regret to say I changed my mind about them.

I visited Du Nord three times before and did not complain so far. Let me explain my situation first. I live in Warsaw, my son who studies in Switzerland lives in Aigle. I visit him as often as I can. Du Nord is practically the only hotel in town. Hotel was decent, staff nice, breakfast good. The statement that the location of the hotel is perfect is exaggerated because Aigle is a small town and every location can be reached on foot within minutes. I think that the problem that I want to describe lies in the lack of proper communication between hotel staff and the management; perhaps the language barrier too. Nevertheless it does explain the situation that I had to experience on December 16th 2018. When I entered the doors of the hotel Du Nord on that day, having booked and fully prepaid room I felt humiliated. Because I informed the hotel via booking agency that I would like to check in earlier at 12:00. Because I will be after overnight trip from the remote location. As I usually did and usually it worked. They agreed for my request. The lady who met me at the desk she knew me. At the beginning she didn't want to come to the desk at all because “hotel day starts at 15:00”. I was staring at her with the suitcase in my hand trying to collect my thoughts because all I dreamed about after a trip was a shower and a bed. She kept ignoring me for another minute so I tried to explain that that they eventually agreed for my early check in via email. Not that I wanted (early check in) it for free. I was tough before that every minute in this hotel is precious. Last time in this hotel when I demanded late check out I was charged, which is normal. What I could not understand at that time was that I was charged double for one night because my son slept in my room. It was a double room, paid as usual before my arrival. I was also charged some extra because he had a breakfast with me. OK, this is the only hotel on the hemisphere that charges extra second person in so called double room. I could live with that especially that hotel demanded extra charge exactly while I was leaving it. I was worried I could not arrive on time to the airport so I paid – full stop. It was spring 2018. Back to the present - the lady at the desk showed me my conversation with the object. There were three requests from me: one – large bed, two - “do not charge me extra for my son's breakfast this time”, three – check in at 12:00. The hotel response was very clear - “they can fulfill my expectations”. Her explanation for the inability of early check in was: “It was an agreement for the first of your request but not the other one” - she said. Then she explained that “i have no right to demand an early check in as the cleaning personnel has a lunch break”. I resigned to inform her how much time I spent traveling this day and how much I do need sleep because she would not understand whatsoever.
I could wait 3 hours for my room on a couch in reception but I didn't want to. I took my suitcase and I left the hotel about noon looking for a room to spend the night. Two nights. Eventually I found it. About 7 pm the hotel (Du Nord) manager called me. She apologized for the receptionist and asked what can be done to solve this embarrassing situation. I told her that right now (7 pm) best she could do is to give me the money back on behalf of my credit card. She replied that this she can't do without the consultation with the supreme manager or someone. She did not propose me anything else. Did not call again.
So final words. It has been on December 16h. Paid for two days in Du Nord. Did not spent a minute in their apartment. Tried to persuade personnel to give me money back but no success so far. The money I spent for Du Nord this time lies in a Swiss Bank and will not return to me.

We are sorry about the fact that your room was not ready early enough for your requested early check in.

Check in Hours are regularly starting at 3pm and check out until 11am.

If you had waited a few minutes ... your room would have been made quickly ....

Report response as inappropriateThank you. We appreciate your input.
This response is the subjective opinion of the management representative and not of TripAdvisor LLC
235JamesC235
Oxfordshire, United Kingdom
87103
Reviewed 23 September 2018 via mobile
Everything you need

It's the second time I've stayed in Hotel du Nord and it's likely it's where I'll stay next time I visit this part of Switzerland again too. I've always been able to park in the road outside and like the hotel's small size (just 5 rooms to each of the 3? floors). To be fair, the bedrooms have not, perhaps, had as much attention paid to them than the public areas downstairs, but there's nothing to complain about and I've always slept well, had a good breakfast and been able to get on with my day's work, refreshed. With friendly staff too, it's a perfectly nice place to stay.

We are happy to read that you enjoyed your stay. The Hotel has 5 floors :)

Report response as inappropriateThank you. We appreciate your input.
This response is the subjective opinion of the management representative and not of TripAdvisor LLC
191garryb
Nairobi, Kenya
1913
Reviewed 19 September 2018 via mobile
Great Location

Super hotel in the middle of Aigle town, just a short walk from the train station and with parking outside on the street. I had two short stays and both times had a very comfortable large room with good WIFI/internet access. The staff were extremely helpful and welcoming. The breakfast buffet provided a good spread with plenty of fresh fruits. I highly recommended the hotel because of the overall amenities, ambiance and location.

Dear valuable guest, thank you for your recent stay at Hotel du Nord Aigle and for taking the time to review it. We are happy to read that you enjoyed your stay. We look forward to welcome you again next april in Aigle Best Regards Nicolas Ming and the entire Du Nord Team

Report response as inappropriateThank you. We appreciate your input.
This response is the subjective opinion of the management representative and not of TripAdvisor LLC
Stephen K
Tel Aviv, Israel
14384
Reviewed 2 May 2018
Perfect for Aigle

This was our third stay at this hotel, and as much as we have enjoyed it in the past it is like a fine wine that gets better and better over time.

The location is perfect. It is in the center of this small historic town, located about 250 m from the railroad station and about 700 m from the castle/Château, a major tourist attraction. There are many restaurants nearby and an extremely well-stocked pharmacy across the street.

Because this is a small hotel, the staff can either be magnificent or bored. Certainly the former is the case here. No matter what we asked for not only did they come through but made additional suggestions as well. A wonderful team.

The hotel does not have a dining room for lunch or dinner but offers a complimentary breakfast. Fresh-baked goods, a selection of cold cereals, fresh fruit, and ever-flowing coffee.

We plan to return next April for our fourth visit and there is no second choice for us in Aigle.

Room tip: 503 -- But don't take it away for us for our next visit because it is superb
Ask Stephen K about Hotel du Nord
Thank Stephen K

We are happy to read that you enjoyed your stay.