US$61
View deal
US$157
US$60
View deal
Reserve now, pay at stay
PricelineUS$60
eDreamsUS$60
Trip.comUS$157
View all 12 deals
* Prices are provided by our partners, and reflect average nightly room rates, including taxes and fees that are fixed, known to our partners, and due at time of booking. Please see our partners for more details.
uwbali
Denpasar, Indonesia
106

It was too short a visit but we are coming back, lovely big grounds with Frangipani trees everywhere, the food was seriously good, that ham wrapped chicken kebab !! Its enough to make me drive up there again from Seminyak.
Bakery next door by the same hotel had great coffee and cakes, only strange thing is that they told me only bali coffee was available at beach restaurant

Room tip: family rooms at front of hotel a bit too close to road, heavy trucks going past during the night will disturb light sleepers like me
See all 190 reviews
Nearby Hotels 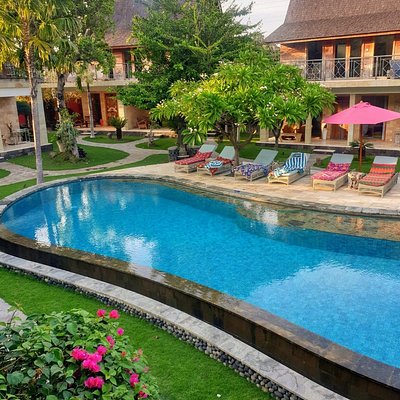 Hotels.com
View deal
Expedia.com
US$120
Agoda.com
US$55
Booking.com
US$133
View all 13 deals from US$55
159 reviews
0.9 km from Taman Selini Beach Bungalows
We compared the lowest prices from 13 websites 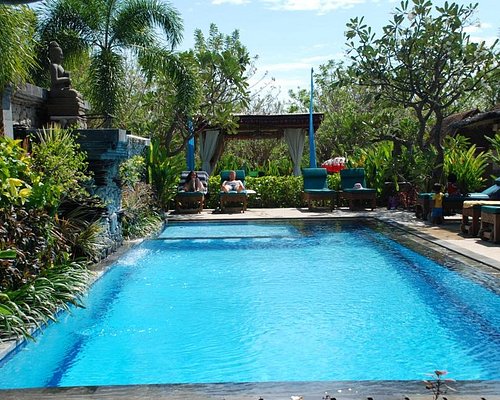 Expedia.com
View deal
Free cancellation
Pay up to 12X
Hotels.com
US$51
Agoda.com
US$43
getaroom.com
US$58
View all 16 deals from US$43
1 227 reviews
0.6 km from Taman Selini Beach Bungalows
We compared the lowest prices from 16 websites
Breakfast included
Kinaara Resort & Spa
US$122

Expedia.com
View deal
Free cancellation
Pay up to 12X
Booking.com
US$79
Agoda.com
US$56
Hotels.com
US$90
View all 14 deals from US$56
540 reviews
0.2 km from Taman Selini Beach Bungalows
We compared the lowest prices from 14 websites
Breakfast included
Giri Sari Guest House

The first thing to greet you at Taman Selini is the fragrant smell of frangipani's. The garden is exquisite, lush and tropical, and the accomodation is traditional and comfortable. We stayed as a family of four for 6 nights, and had a fantastic time here. The rooms and bathrooms are clean but not always functional. The upstairs shower flowed from a hose shape which flooded the floor, and my husband had to clean and re angle our shower to stop it flooding our bathroom floor also. The only reasons I didn't give Taman Selini 5 stars is the lack of fridge to store water/drinks (it gets pretty hot up here), and no tea/coffee/kettle facitlities. If you wanted a hot beverage you had to pay for it.
Breakfast was a bit limited but still okay for us, we are not too fussy.
The location is perfect, right on the beach, close to dive places (Ocean Dreams are amazing),restaurants and mini mart. I could have spent the whole week just reading on the day bed, cocooned by the beautiful garden.
I can almost guarantee we will return.

This review is the subjective opinion of a Tripadvisor member and not of TripAdvisor LLC.
nikh100
1610
Reviewed 28 October 2018
Lovely to relax, but choose room carefully.

We stayed here on a spontaneous stopover whilst travelling in Bali after finding Ubud hectic and wanting to get away from the more touristy areas on the south of the Island. We liked the relaxed vibe of the place, so stayed here for 5 days, ending up having 3 different rooms. There first one was fab. Light, airy and spacious, although the outdoor bathroom was a but weird. The second and third rooms, moved closer to the pool area and beach, and had more foliage outside, needless to say there was an increase in Mosquitos and other bugs. The rooms were also smaller, darker and the outdoor bathrooms more overgrown, so again, a haven for creatures which is not always what you want as you visit the bathroom late at night! He restaurant was ok, providing a basic breakfast and a reasonable evening meal. All we did was sunbathe, read, sleep and swim, a perfect place to do it! Laundry service was ok and we got our massages outside the hotel. Wifi was pretty rubbish. Hotel staff really accommodating.

Room tip: Pick one close to the main building and away from the pool area to avoid multiple bug issues.
Ask nikh100 about Taman Selini Beach Bungalows
Thank nikh100

This review is the subjective opinion of a Tripadvisor member and not of TripAdvisor LLC.
Ellie G
Sydney, Australia
3
Reviewed 4 September 2018 via mobile
Gorgeous

Well maintained grounds, very tasteful and spacious bungalows, staff are extremely helpful and friendly, breakfast is delicious and has views of the ocean. An extremely relaxed vibe. We didn’t eat dinner at the restaurant as we tried local Warungs instead. A laundry service was provided, as was in-room massage, and the hotel organised a car for our trip back to Denpasar. We stayed in late August, weather was beautiful, and not many other tourists around. Absolutely recommend.

This review is the subjective opinion of a Tripadvisor member and not of TripAdvisor LLC.
Em M
Melbourne, Australia
9461
Reviewed 6 August 2018
Lovely slice of calm.

I really enjoyed my stay in Taman Selini. It's a lovely small place right on the beach. I really just enjoyed the simplicity of staying here. I didn't actually do anything there except swim, read and then pop up to the village for a meal in one of the many excellent warungs there. On a lounge by the pool you can look one way to the mountains and the other to the sea. The gardens around the hotel are well looked after and lovely. The hotel restaurant is quite good too and has an interesting mix of local and greek foods. The restaurant staff were excellent.
I highly recommend getting up for a sunrise. It's spectacular and I had the beach to myself each time.
The rooms are a traditional balinese style with a pretty simple outdoor bathroom. I loved the space out the front with daybed and chairs.

A few of the not so great parts:
-internet was pretty patchy and there were some days it didn't work at all.
-it was very windy and that meant that a lot of debris was blown into my outdoor bathroom during the day making it hard to have a shower at night. Housekeeping were often sweeping outdoor areas so perhaps on those super windy days, it might be worth doing a second sweep of bathrooms.
- no safe or fridge in the room
- the room was quite dark so I struggled with reading at night.

Pemuteran was a great place to spend time and I highly recommend it.

This review is the subjective opinion of a Tripadvisor member and not of TripAdvisor LLC.
Trevor J
33
Reviewed 1 July 2018
Your room will have mosquitoes, your bathroom will be outside, and your AC may not work.

The positives: At first look, this is a beautiful beachfront resort. You get your own bungalow (with no shared walls). The food is also good, and the employees are friendly and helpful. They can do your laundry for a small fee. They provided me with free blue things for the electric mosquito repellent in my room. And they loaned me a soiree so I could attend a ceremony nearby.

The negatives: the bathroom is outside, which means you will get bit by mosquitoes when you shower or use the toilet. Worse, even inside the room, the mosquitoes are never ending.

I discovered the reason on my fourth day there: when you slide the front doors closed, there is a gap between the doors and the wall. It's almost an inch thick. On both the left and right sides of these sliding doors, mosquitoes kept flying into my room.

On the second night, I woke up hot and sweaty, then discovered that the air conditioner had turned itself off. I turned it back on but it had poor airflow. When I woke up, it was off again. My third day I reported the problem. A freelance repairman came over. I was told that he replaced a part. The A.C. stayed on that night, but only because the vents were almost closed.

My fourth day, each time I opened the vents to get more airflow, the A.C. would turn itself off after an hour. I reported the problem again. An employee told me the A.C. was broken. He offered to move me to another room which was closer to the street. But the sound of scooters and motorcycles was already disturbing my sleep, so I declined.

He removed the vent cover to improve the airflow. From that point on, the A.C. turned itself off about an hour after I turned it on, over and over again. This occurred about an hour after I went to sleep, and I woke up hot and sweaty in the middle of the night. Had to turn it back on, and the repeat this again in the wee hours.

My final issue is not the hotel's fault, but it's still worth noting. I was in room 4 which is somewhat close to the main street. I could hear scooters and motorcycles, as well as roosters, barking dogs, and very loud music from nearby mosques, and this kept me from falling asleep when I got in bed at 10pm, and sometimes woke me in the wee hours.

I think the quietest rooms are room 1 and 10 and 11. Those are closest to the beach. Of course, it's a public beach, so the hotel cannot prevent barking dogs or boom boxes on the beach.