“Fantastic!”
S0lHXzNfYlBQ
other travellers have booked this property 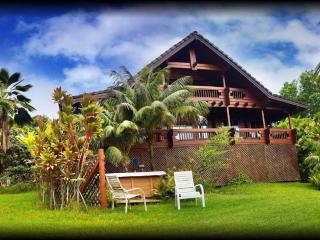 Very good - based on 4 reviews
Write a Review

We couldn't have been more thrilled with our stay at the Maui Chalet. It was spacious, beautiful, clean and well stocked with all one needs. The views and decks were fantastic. Truly a tropical view and experience. It was off the path-well-traveled that provided privacy but also easy to get to Paia for great food and supplies. The owners are spectacular . . . willing to give advice, give tours and share their experience. Finally, the hot-tub is the perfect way to relax into the evening. We couldn't recommend it more highly.

Date of stay: March 2015
Liked best: The view and space
Liked least: hard to say, we liked it all.
Travelling group: Spouse/Partner
Would you recommend this hotel to a friend?   Yes.
Recommended for:
Was this review helpful? Yes
This review is the subjective opinion of a TripAdvisor member and not of TripAdvisor LLC
yeahhh, just what we like to hear! so happy you found us! thanks for chosing to stay in our paradise.
This response is the subjective opinion of the management representative and not of TripAdvisor LLC
Problem with this review? Thank you. We appreciate your input.

Wonderful location, we felt like we were in another world. Such amazing grounds, terrific hot tub, and Jette, the host, is lovely. The house has everything you need, including kitchen items, books, and games. The only downside were the bugs - to be expected in a tropical jungle setting, but there were lots of little ants that seemed to sense our presence and got worse throughout the stay, despite best efforts to keep neat and clean. Apparently, the immense amount of rain the month before contributed to the infestation. Still, we really enjoyed our stay.

Date of stay: May 2014
Would you recommend this hotel to a friend?   Yes.
Was this review helpful? Yes
This review is the subjective opinion of a TripAdvisor member and not of TripAdvisor LLC
When they came they noticed ants on the outside stairs, they told their son, "no big deal". We numerous times told them to please call us with any questions or concerns. I never heard anything about ants, my Wife, Jette, does not think they even mentioned it to her until they left. They said they had not taken out their kitchen compost for 4 DAYS !! They said they forgot where we told them the outside compost bin was. They did not call us, just let it sit inside the house, in the tropics for 4 days.
The Chalet was not 'Infested', there were ants in the kitchen in a row, not all over everything. There were some ants upstairs because the unusually heavy rains had flooded their outside nests. A day after these people left, we had all the ants gone. If they had let us know, we would have REMOVED THE COMPOST, wiped up the line of ants, put soap water in the cracks and baited with boric acid, solving the problem. We could easily have followed up, checking in several times a day while they were out. Unlike hotels, we never enter a guests dwelling unless they ask us to, we totally respect their privacy. If informed, we would come in as many times as necessary. Don't tell us after you leave and then use words like 'Infest'. We are one property back from one of the few pristine bays left on Maui. We do not spray poisons around the house, all over the grounds, like the corporate hotels and condos do, which just runs into the ocean, where even minusule amounts destroy the coral and marine life. We respect the land, have some respect for us.
This response is the subjective opinion of the management representative and not of TripAdvisor LLC
Problem with this review? Thank you. We appreciate your input.

This house in Haiku is centrally located in Maui . It is an hour from the west side , and an hour from the east side. The house is architecturally stunning and accommodated my wife and 3 teenagers very well. There are a lot of extras that come with the house such as snorkeling gear , beach mats , kitchen appliances , washer / dryer and a Jacuzzi. Gorgeous grounds with fruit trees , palm trees , ocean view and complete privacy. Even the owners of the house were excellent - they were very considerate, kind and trusting . i would recommend this house to anyone interested in a vacation rental away from the crowds.

Date of stay: January 2014
Liked best: Location and open style of house
Liked least: The pillows & mattresses needed upgrading
Travelling group: Teenagers
Would you recommend this hotel to a friend?   Yes.
Recommended for:
Was this review helpful? Yes
This review is the subjective opinion of a TripAdvisor member and not of TripAdvisor LLC
Problem with this review? Thank you. We appreciate your input.
Previous Next
1 2
Updating list...
Still can't find what you're looking for?

Looking for a place to stay in Haiku?
View all 29 holiday rentals