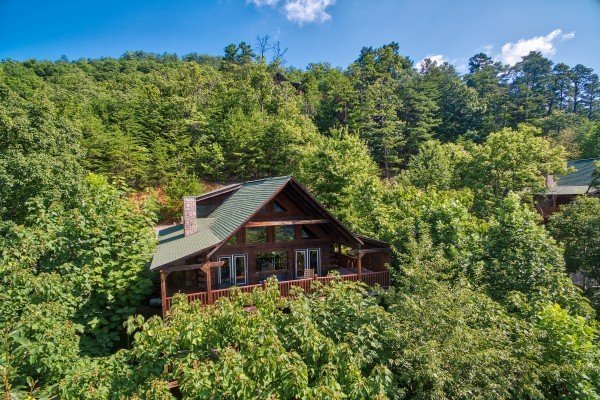 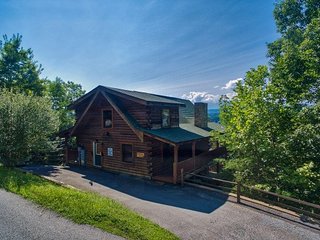 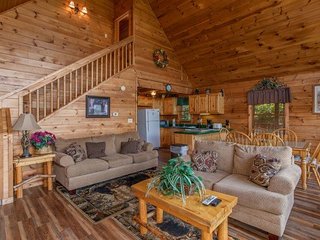 Very good - based on 1 review
Write a Review

Only 10 minutes from downtown Pigeon Forge but very relaxing and serene!

Spacious parking with enough space for two large vehicles (just need to cut back the low-hanging tree limbs so you don't keep ducking to miss them).

From the moment we walked in the door, we were pleased. The place was clean, smelled clean, and was bright and cheery. The pictures displayed are pretty accurate. The living room pictures need updated but that's only because two new reclining couches were delivered our 2nd day there to replace the couch and love seat that were very worn. Now they just need to replace the sleeper sofa in the game room downstairs.

The person who cleaned took the time to make swans out of towels for each of the beds. Plenty of cookware and dishes too.

Here are some things that need attention or you may want to consider providing your own alternative: The lighting in the upstairs bathroom is dim above the commode and with the dark blue interior shower curtain, you are almost in the dark as you try to shower. The shower heads are the $1.99 kind you can buy at Big Lots (in all the bathrooms) and the pressure is okay, so ladies, you might want to consider taking a hand-held shower wand with you and replace the one installed so you can rinse properly, then put it back before you leave (lol).

There is only 1 lamp in the living room which doesn't give much light, so unless American Patriot Getaways adds another lamp to the living room, you will need to use the bright overhead fan lights to see in the evening. There is no lighting on the sides of the wrap-around porches either. There are no lights in the closets or in the laundry cubby (closet). I bought one of those halogen battery-operated flip lights and used it in the upstairs bathroom when I showered and took it down to the laundry cubby (that's what I call it) so I could see inside the washer area - it's very dark even in the daylight.

Wi-Fi offers a 2.4g speed and a 5.0g speed but it's definitely not. I tried to use my Amazon Fire stick to watch Hulu but the internet was way too slow. I wasn't able to join a Zoom meeting I was scheduled for (for work) due to the speed, and I have an interactive game I like to play which I was unable to do through the Wi-Fi. TV programming is ok though. Just got to guess at the stations (there isn't a channel guide to let you know what channels are offered - not what's on when).

The hot tub was average, had some jet covers missing and is a little unlevel (more water on one side than the other). Where I sat, it actually almost came up to my chin, while my husband (and he's not tall) had it hit mid-chest on the opposite side of the tub.

DON'T FEED THE SQUIRRELS! We thought they were so cute, sitting on the arm of the chairs outside with their little paws on the table like they were waiting for dinner. So we tossed some nuts and crackers outside and watched them watch us as they ate. Then they jumped up on the rockers next to the picture windows and kept looking in at us. The next morning my husband had to shew them away because they were actually scratching on the door (crazy). After a couple of days they went on about their business and just showed up a couple of times. LOL

As with any cabin in the woods, you have spiders to contend with, and other than the light fixtures outside, they weren't too bad. No webs on the outside chairs or around the hot tub so that speaks very highly of the cleaning personnel.

Date of stay: August 2021
Would you recommend this hotel to a friend?   Yes.
Was this review helpful? Yes
This review is the subjective opinion of a Tripadvisor member and not of TripAdvisor LLC.
Problem with this review? Thank you. We appreciate your input.
Updating list...
Do you own a holiday rental? List it here.

Looking for a place to stay in Sevierville?
View all 1 550 holiday rentals