US$123
US$113
View deal
SAVE US$10
CheapTicketsUS$123
TravelocityUS$123
Orbitz.comUS$123
View all 7 deals
Prices above are provided by partners for one room, with variable occupancy rules as provided by the property, and do not include all taxes and fees. Please see our partners for full details.
cherrydoll
Scranton, Pennsylvania
3319

Good for roughing it

Had a pleasant stay in a cabin. The only problems we encountered are the terrible Wi-Fi (you basically have to park right in front of KC Pepper to get any service and even then it's slow and unreliable) and the mattresses. The bunk bed mattresses are very thin and the mattress on the other bed was very firm. I did finally get to sleep but I woke up pretty sore & stiff. I don't know if I'd return because I have chronic back pain and the terrible mattresses are a deal breaker. For someone without any disabilities it might be alright. If you have back pain avoid!

Trip type: Travelled as a couple
See all 44 reviews
Nearby Hotels 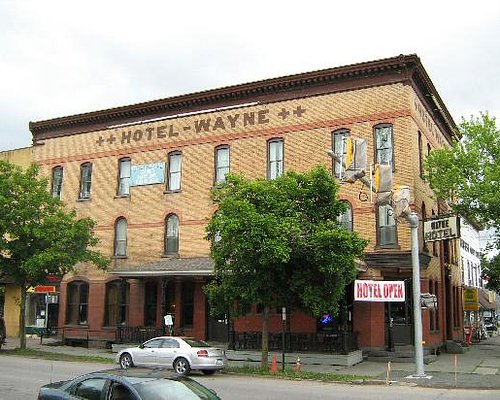 Breakfast included
Wayne On Main
US$108
Booking.com
View deal
Free cancellation
Reserve now, pay at stay
Hotels.com
US$108
Expedia.com
US$108
Priceline
US$108
View all 11 deals from US$108
3 reviews
6.9 km from Lake Wanoka Resort
We compared the lowest prices from 11 websites 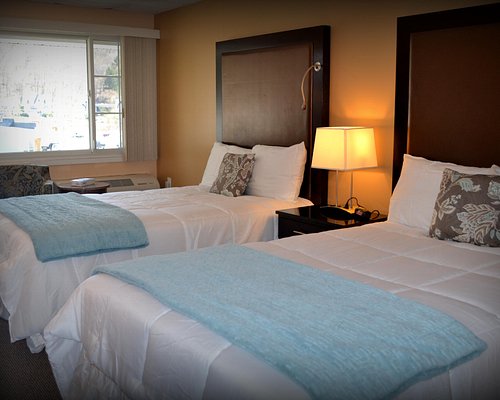 Wayne Inn
US$81
Booking.com
View deal
Free cancellation
Hotels.com
US$81
Priceline
US$81
Expedia.com
US$81
View all 13 deals from US$81
42 reviews
5.9 km from Lake Wanoka Resort
We compared the lowest prices from 13 websites
Breakfast included
Schrute Farms

Taking safety measures
We compared the lowest prices from 4 websites
Top Rated
All Inclusive
Cove Haven Resort
US$358
Booking.com
View deal
Free cancellation
Priceline
US$358
FindHotel
US$327
Hotels.com
US$337
View all 16 deals from US$327
3 108 reviews
11.0 km from Lake Wanoka Resort

My friend and I booked the one bedroom cabin VERY last minute for a girls weekend. I had no idea what to expect, which is always a good setup for being very pleasantly surprised - and DEFINITELY was. The cabin was pleasantly AC'd (too much even! We had to turn it off) and the cabin was very clean and the bedroom had both bunk beds AND a double bed, which we did not expect. The kitchenette was also very clean and nice and had much more than was advertised. AND as everyone has already said, the on site restaurant was excellent. The staff was also so nice and both check in and check out were REALLY easy. The only thing was the wifi wasn't so great... but hey, that's good for unplugging for a day or two.

This review is the subjective opinion of a TripAdvisor member and not of TripAdvisor LLC
Tconway183
Hawley, Pennsylvania
164
Reviewed 21 July 2018 via mobile
Potential!

Very cozy and friendly place with a great bar and grill on site. Kids will love the splash pad playground and lake. It could use some upgrading. Maybe some planned activity for kids and a movie night under the pavilion. This always is nice at other campgrounds I have visited. Worth a weekend visit for sure.

This review is the subjective opinion of a TripAdvisor member and not of TripAdvisor LLC
GeorgeNadine
Forty Fort, Pennsylvania
7959
Reviewed 9 January 2018
Problem solved

This was our 4th stay at Lake Wanoka. All of our stays have been in the resorts "off-season". I called the resort directly on Wednesday to book the King suite for Saturday night. The last two times we booked through Hotels.com we had problems. Seems that the resort never got the reservation from hotels.com. Thankfully in the past, the resort did not have anyone else booked in the room we reserved. That is why I called the resort directly this time to ensure we indeed had a reservation. There was no answer when I called so, I left a voicemail asking for a return call. By Friday I still did not get that return call so, I decided to reserve the room through hotels.com despite my past experience. We arrived Saturday at a dark country store. The store is where you check in. I called the resort and no answer. I then called next door to the restaurant KC pepper. I explained we were there to check in but the store was dark. The girl how answered said that someone would be right there to help us. The owner of the resort appeared a short time later and begged for my forgiveness and explained that there is some sort of disconnect between hotels.com and the resort. She went on to reassure us that she would take care of the problem and she would see what cabin was available. I then explained that we had our 13-year-old daughter with us and the King suite would be the only cabin that would suit our needs. She pleasantly said that she would check on the suite and return in 10 minutes or so which she did. We returned to the office and she asked to give her 1/2 hour to clean the cabin and ensure that it was presentable. I told her we were going to visit some friends and would return a few hours later. With that, we left the resort and returned a few hour later. We went right to our cabin and found it to be clean and comfortable. She had left the two electric fireplaces on to take the chill out of the air. The bathroom was stocked with soap and the usual toiletries. The sheets were fresh and crisp and the cabin was very nice.

She really did go out of her way to ensure we had a pleasant stay despite the problems early on. We decided to take a ride around the resort the following day as we departed. We noticed there were a lot of pick up trucks parked at all the cabins. We could be wrong but it would appear that those cabins are rented "long-term" to construction companies to house their workers during the offseason of the campground. If that is the case then it was an OUTSTANDING business decision of the owner. It also leads me to believe she might have displaced one of those long-term guests in order to accommodate our reservation despite the disconnect with hotels.com. THAT is going above and beyond to accommodate your guests despite a problem that was no fault of her own.

In summary, an outstanding resort with clean cabins and an owner who went out of her way to provide an excellent experience despite its rocky start. We will hopefully return to the cabin soon BUT, we will make more of an effort to contact the resort directly before just showing up with what we believed was a confirmed reservation in the off-season.

This review is the subjective opinion of a TripAdvisor member and not of TripAdvisor LLC
Jay M
28
Reviewed 24 September 2017
Terrible, dirty, rude staff

Stayed at the resort and ate at the restaurant. See review for kc pepper bar and grille. Cabin was dirty, smelled terrible- sheets had mud and dirt on them. Owner is rude, obnoxious, cocky and all around very unpleasant and miserable. Grounds are poorly maintained.

This review is the subjective opinion of a TripAdvisor member and not of TripAdvisor LLC
Quasarquest
Greentown, Pennsylvania
5411
Reviewed 23 July 2017 via mobile
Beautiful Place

I have only been here a few times for events, but the grounds are nice and spacious, they have a kids splash zone water play yard and great areas to take your dogs out for a run. The restaurant there is very good and the woodwork is beautiful.