Canopy Chalets
Lock in the lowest price from these sites

ZenHotels.com
Prices above are provided by partners for one room, with variable occupancy rules as provided by the property, and do not include all taxes and fees. Please see our partners for full details.
Lotuslady18
Airlie Beach, Australia
8821

We loved the Chalets! There are 13 individual Chalets in this little resort surrounding the beautiful pool and tucked away at the end of a quiet street at Nelly Bay. Just a 5 minute walk to the beach if you needed that also!
The Chalets are furnished beautifully with everything you could possibly need. The upstairs level is the bedroom with the most comfy bed.
Air conditioning and ceiling fans keep the Chalets cool.
The kitchen is equipped with a fabulous array of equipment so if you are cooking you will find all that you would need.
There is a selection of movies to watch and also a small library of books if you forgot to bring one.
We made use of the outside barbecue area where tables and chairs are also supplied with lighting should you be sitting there at night. There is plenty of parking.
Some of the Chalets have permanent residents in them and they were very friendly and welcoming.
My only negative comment would be that one of the residents owns 2 dogs which barked every time someone arrived and were also allowed into the pool enclosure and into the pool.
Otherwise it was a beautiful place to stay and I can’t wait to return. We stayed in chalet number 12 and that would be my choice again.
A heavenly stay! More

Show less
Trip type: Travelled as a couple
See all 68 reviews
Nearby Hotels

Expedia.com
View deal
Booking.com
US$107
FindHotel
US$95
Priceline
US$107
View all 15 deals from US$95
303 reviews
2.7 km from Canopy Chalets
We compared the lowest prices from 15 websites 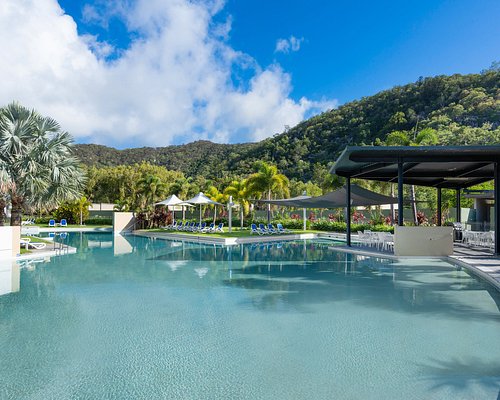 Expedia.com
View deal
Hotels.com
Destinia.com
US$128
Prestigia.com
US$240
View all 16 deals from US$128
1 842 reviews
1.1 km from Canopy Chalets
We compared the lowest prices from 16 websites Expedia.com
View deal
Hotels.com
ZenHotels.com
US$52
Travelocity
View all 14 deals from US$52
112 reviews
2.0 km from Canopy Chalets
We compared the lowest prices from 14 websites
Base Backpackers Magnetic Island

The chalets are secluded away from the noise of everyday holidayers & tourists. Very clean, quiet, modern chalets. Loved them for couples or small family. My daughter & I loved it. Nelly bay was a stroll down the road to a beautiful quiet beach with crystal clear blue water. Highly recommend for a relaxing break away. Next time we will stay longer.

This review is the subjective opinion of a TripAdvisor member and not of TripAdvisor LLC
kstravels2015
Rochester, New York
185
Reviewed 15 September 2017
Property has changed hands since our last visit and gone way, way downhill.

Unfortunately the former propieter, Alan, has passed away and Canopy Chalets is a shadow of its former self. My wife and I stayed in unit #4 in mid-September 2017, returning to Canopy Chalets for a 2nd time as we were so thrilled with our stay in 2014. Firstly, this location is no longer adults only. The BBQ outside is in disrepair and doesn't work. There was a strong stink of insecticide in our chalet, wasp nests in the door jam, the fridge was rusty and dirty, and the shower was broken (shower head spraying water all over and loose, it actually came down and hit me in the head). Multiple units have been sold to private owners: unit 2 has two constantly barking little dogs and the owner speeds into the park lot with no regard for others' safety. The booking agency, "Best of Magnetic," was distant and cold with no interest in customer service. I had purchased steak and corn to cook on the BBQ for a nice romantic dinner with my wife but the BBQ would not light. There are two BBQs, but one was all rusty and full of spider webs and obviously not used in a long time so I tried the other one first, but neither would light. Very frustrating and disappointing. I cannot recommend this accommodation any longer.

This stay has everything you need! It's quiet, it has beautiful nature sounds, its private and close to everything. It's the most perfect set up! Lounge, dining, kitchen and bathroom all on the lower floor and bedroom tucked away upstairs. 5stars for me.

Well set up A- frame unit with mezzanine (bedroom). Self contained kitchen, A/C, washing machine and drier, it has everything you need (except for a coffee plunger). It is one of ten or so units located around a palm shaded swimming pool. The shared and shady gardens have barbecues and outdoor tables.

The bus stop for the efficient Magnetic Island bus system is at the bottom of the driveway - very convenient.

The managing agency (Best Magnetic) is friendly and drove us to the unit from the ferry terminal.

With louvred windows to allow for cooling cross ventilation, you do hear nearby conversations at night if your neighbours have loud voices (ours did), so earplugs are a good idea if you are noise sensitive. Overall a great choice and recommended.

This review is the subjective opinion of a TripAdvisor member and not of TripAdvisor LLC
Josie L
Mudgee, Australia
142
Reviewed 3 August 2016
Beautiful and relaxing

We loved the canopy chalets; set in the middle of a bird-filled forest, with all the amenities anyone would require. It's a beautifully designed sloping-roofed cottage, just for you and your partner. If you're tossing up between this and a hotel/resort room; I would highly recommend the Canopy chalets! Helps if you have a car, but quite accessible by bus or on foot.