refuge for the animals in us

In order to experience an awesome Safari on land rovers and stay in the semi open stone (with traditional straw top) huts, my girlfriend and I visited at this animal refuge at Mkhaya Game Reserve, in February 2017. Our hut was comfortable and clean, with two single beds and mosquito nets, shower and separate toilet. There is a safe and locker trunk in the hut for storage. It also has a wooden picnic table∣bench and lounge chairs outside. We booked from 10 to 10, when we arrived for lunch there were deers strolling in the camp area! During two Safari trips the first day, we saw war hogs, butterflies, rhinos, crocodile, deers, hippos, and birds. We enjoyed dinner with lovely evening entertainment (Swazi songs and dances) . Next morning we were able to see giraffes, rhinos before we left. It was a terrific and surprisingly well kept accommodation and wonderful refuge and relaxing yet exciting experience for us, two busy city folks.More

Thank you for such a lovely review!
We hope you can break away from the city and get more "Mkhaya fix"

Report response as inappropriateThank you. We appreciate your input.
This response is the subjective opinion of the management representative and not of TripAdvisor LLC
See all 235 reviews
Nearby Hotels 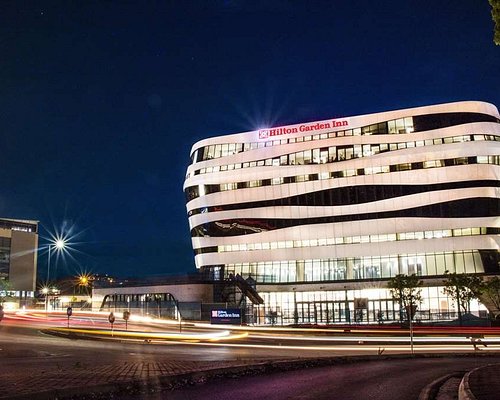 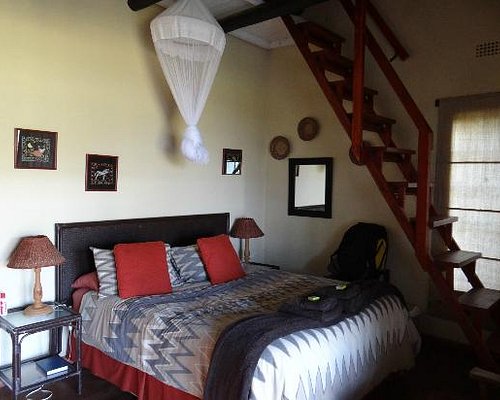 What a truly amazing place to stay, the huts if you can call them that are brilliant you actually feel as if you are sleeping outside.
All the amenities are amazing considering there is no electricity or gas, the food was lovely, the staff amazing especially when they put on their little show after dinner.
If you ever visit Swaziland don't miss out the Stone Camp you will not be disappointed.

Thank you for your WOW review! Wonderful to read - we look forward to your return!

Report response as inappropriateThank you. We appreciate your input.
This response is the subjective opinion of the management representative and not of TripAdvisor LLC
KattyNorbertLouka
Santa Cruz de Tenerife, Spain
95
Reviewed 25 January 2017
Amazing experience!

We stayed here for two nights with our 9-year old son. We absolutely didn't know what to expect. It ended up to be one of the most amazing experiences we had during our South African trip (even if located in Swaziland). Kind and extremely helpful staff. Good food (prepared without electricity). Although no electricity (only petrol lamps) we found our room extremely comfortable (mosquito nets, warm water shower, ...). Very African style. Wild animals freely walking around your room (especially at night). We recommend everybody to arrive in the afternoon, go for the game drive (black rhinos) and arrive at nightfall to have the full surprise of the rooms lit up by petrol lamps... A wonderful stay close to nature. Highly recommended. We'll be back! Thanks to the entire staff for this wonderful experience!

Thank you for your wonderful review!

Report response as inappropriateThank you. We appreciate your input.
This response is the subjective opinion of the management representative and not of TripAdvisor LLC
E1izabeth4
Arlington, Virginia
2220
Reviewed 17 January 2017
Unbelievable experience

Mkhaya Game Reserve is one of the most amazing places I've ever visited. The staff was wonderful, the food was great (and they cook it all without electricity). Sleeping in the stone lodges is really cool--there's really nothing separating you from outside except for a gate across the entryway and a few steps. I woke up around 4 am to a large nyala eating something about 10 ft away from my bed. I also loved that the park is smaller and the guides really know each individual rhino well.

A fabulous review thank you!! Lovely to hear your wake up call was so magic.

Report response as inappropriateThank you. We appreciate your input.
This response is the subjective opinion of the management representative and not of TripAdvisor LLC
ericdsouzatravel
Toronto, Canada
7831
Reviewed 3 January 2017
Very cool!

We stayed for 48 hours, 10am to 10am. From my research I knew there was no electricity, but wasn't sure what to expect for the rest of it. Well the rest of it completely blew us away, in a good way :)

There is running water, sit down ensuite toilets, hot showers, mosquito nets, and as you probably know, no walls. Just a short wall about 2 feet high is all that is between you and the game reserve! Inside (if you can call it that), the chalet was very clean, with a polished concrete floor. The staff put out paraffin lights during dinner so it's really romantic when you get back to your chalet (depending on the wind, sometimes the fumes aren't as romantic, but whatever).

I was concerned about the lack of a/c, but the temperature drops at night and with the lack of walls, the breeze goes right through and it's quite comfortable at night.

There were hardly any mosquitoes while we were there, I'm not sure if that's normal or just due to the droughts. Even at night it's wasn't scary to leave the safety of the mosquito net to use the toilet.

The highlight for me was the walking safari. Depending on the ability of the group, it can get really into the bush. We saw white rhinos on walking safari, about 15m away.

We came here to see rhinos, and we saw lots of rhinos, mostly white and some black. There's also lots of other animals.

Food was tasty, buffet style. They even have cold beers! (which I assume means somebody has electricity somewhere...) After dinner there's a cultural dance and singing. Not really my thing, I would prefer just sitting out under the stars listening to the sounds of the game reserve. They are quite good though.

We had two different rangers during our stay. One was good, driving at reasonable speeds for safari. The other was determined to find black rhinos for other guests that were on their last game drive, and zipped all over the park as fast as he could. They also cram lots of people into the vehicles, on one game drive we had 10 people. Compared to other safaris we had been on it was a bit of a change, and somewhat noisier.

You can pay by credit card at the lodge for extras like beer. They take your card number and bill it later on.

The chalets are all secluded, and you think you're all alone in the park while in your chalet. Some are quite a hike from the main lodge!

No electricity = no wifi.

A fabulous review, thank you!
The cold beers are thanks to gas fridges, not electricity ;o)
Thank you for your comment regarding your second guide. This is not what we aim to do - our guides are tasked to respect the bush and its creatures and to drive at a comfortable, respectful speed. We will address this with our guides as a matter of urgency.
For the rest - a great read thank you!

Report response as inappropriateThank you. We appreciate your input.
This response is the subjective opinion of the management representative and not of TripAdvisor LLC
Delphine T
Marseille, France
51
Reviewed 27 December 2016
Heaven on Earth

Looking for an experience of a life time, do not hesitate anymore, this is the place to be. Beautiful game drives, amazing stone camp, friendly staff, wild beasts all around and in the camp. Relaxing and enjoyable place where nature guides your pace.

Such a lovely review, thank you! Apologies for this late response!

Report response as inappropriateThank you. We appreciate your input.
This response is the subjective opinion of the management representative and not of TripAdvisor LLC
View more reviews
PreviousNext
1…8910…