Nyamatusi Mahogany is like heaven on earth. The facilities are stunningly beautiful. The rooms are luxurious and the lodge is beautifully decorated. And the food is great! But what makes this place special are the people. We were greeted every day by Jaison and Bee, who couldn't have been nicer and more helpful. Bee anticipated every need we had. My daughter forgot her hat and jacket at the camp one day and when we came back looking for it 30 minutes later, Bee was standing outside when we pulled up with the hat and jacket in her hands. It was unbelievable! Witness and Chloe, the assistant manager, were great too. We had some problems before we got to the camp and Chloe was really helpful in trying to work those out. Everyone went out of their way to make it a really special experience.

The major star though, was Nick, our guide. He was really knowledgeable and tried to show us everything possible. He also gave us a new appreciation for birds! He was patient, personable, kind, and just wonderful. You would be lucky to get him as a guide.

We also went on a canoe safari (and saw over 100 hippos!) and had a fantastic time with TK and Kuba!

Hi Lori, thank you for taking the time to write this lovely review. Your kind words to our team are hugely appreciated. I have shared them with our entire team. I am thrilled that you and your daughter had a wonderful time and our team were able to help sort out any problems or concerns.

We will continue to shoot for the stars and we look forward to welcoming you back in the near future. Until then keep well.

Report response as inappropriateThank you. We appreciate your input.
This response is the subjective opinion of the management representative and not of TripAdvisor LLC
See all 17 reviews
Nearby Hotels 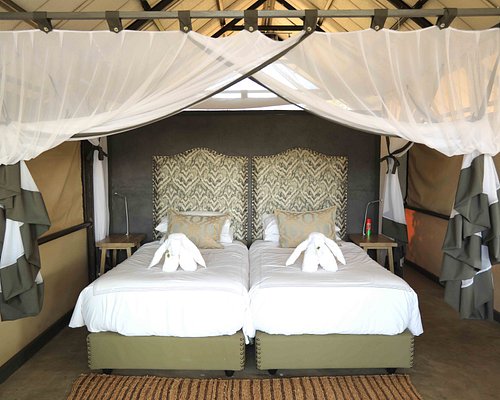 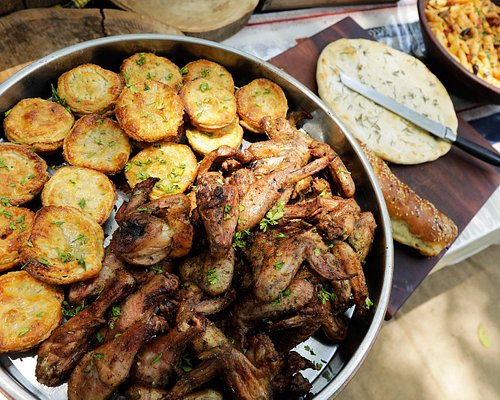 Brand new family luxury camp in the UNESCO world heritage Mana Pools area of Zimbabwe superbly located in a picturesque part of the Zambezi river. The camp features spacious luxe tented accommodation with plunge pool, outdoor showers and sweeping views of the Zambezi riverfront area, accompanied by superb food and service. The game drives and guides are world class and there are also walking and river safaris. One of the most upscale lodge options in the Mana Pools & Lower Zambezi area of Zimbabwe. The Luxe Voyager

Again, thank you for the time spent and the great care in writing this wonderful review.

Report response as inappropriateThank you. We appreciate your input.
This response is the subjective opinion of the management representative and not of TripAdvisor LLC
Travel531718
1
Reviewed 27 May 2019
Heaven on earth

Truly a beautiful lodge with the most friendly staff.
The viewing deck over the Zambezi river are so relaxing, We had lunch set up right next to river where you just sit down and take in the beauty of nature. This lodge just gives you the feel of sit back and relax and forget about city life.

It truly is heaven, thank you for taking the time to leave this review. I hope you are able to return home refreshed and ready.

We hope to welcome you back in the near future until then stay well.

Report response as inappropriateThank you. We appreciate your input.
This response is the subjective opinion of the management representative and not of TripAdvisor LLC
jakehyr
Singapore
6046
Reviewed 23 May 2019
Stellar New Camp!

My partner and parents were booked here on our Mana Pools safari, just two days after the camp opened for visitors. The first few guests were travel, agents, and we were told that we were the first commercial guests, and there was not a waking moment that we were not swept off our feet at Nyamatusi Mahogany.

The camp is situated adjacent to Nyamatusi Camp, and has 2 pairs of conjoining rooms that share a dipping pool. One room is more lavishly furnished than the other, with a four-clawed bath tub, and possibly double in size of the other. Common to both rooms is a plethora of amenities: a well stocked cooler box with drinks of your choice, an air conditioning unit (which we never really used), outdoor shower and toilet, even some mats and exercise equipment!

The furnishing at the main area is meticulously curated. At night not a single kerosene lamp was out of place, and every little corner was more picture-worthy than the previous that I almost took more pictures of the lodge than of the wildlife. The bar is situated on the top deck, with expansive views over the Zambezi, complete with a library with a study area.

The icing on top of the cake has to be the impeccable staff. Joyce and Jaison run a tight team, and there was no request they could not handle. We felt at home from the moment we arrived, and we were able to set our pace for the two nights we were there. The food is also by far one of the most serious culinary affairs we've ever had on safari.

The game viewing in Mana Pools at this time of the year suffered from a substandard wet season, and according to the guides, this would be how the plains would look like in October. In fact, some of the pools had already dried out. The game was spread out, and most of our key sightings were when we were at the sister ABC property at Kanga. Our guide Shingie worked hard to deliver, even speeding us to the last known sighting of the Nyamatusi pack of 14 wild dogs back where we came from up in Kanga, and that moment alone made our trip exquisitely perfect. Being able to walk anywhere in the bush is an added advantage at Mana Pools, and we had extremely intimate moments with the wild dogs that evening.

Nyamatusi Mahogany is an absolute gem, and I wish the camp every bit of success they have in the years to come!

This is too beautiful, thank you for writing such a wonderful and comprehensive review. Thank you for your kind words and appreciation of how hard our team on the ground worked to get the camp to where it is. As you mention it is beautiful with exquisite views to boot!

I have already shared this wonderful feedback with the entire African Bush Camps team, I know there will be some proud smiles going around.

How magical that you were able to track down the Wild Dogs, they are such an incredible species!

Thank you again, this is so fabulous to read. We hope to welcome you back in the near future until then stay well.