This is an authentic, value for money, semi-permanent mobile tented camp located in a stunningly beautiful Zambezi riverfront location. It offers excellent game drives but is most well regarded for its walking safaris and water safaris on a canoe on the Zambezi river.

The food is home style cooking and the service is warm and personal and the quality of the safaris and guides is world class. This mobile camp is highly recommended if you are looking an active and authentic immersive safari experience while on a budget. The Luxe VoyagerMore

Thank you again, it is so wonderful that you were able to experience the full circuit with us. Each camp and team are so unique and I believe your trip will be a testament to that.

All the best and once again thank you.

Report response as inappropriateThank you. We appreciate your input.
This response is the subjective opinion of the management representative and not of TripAdvisor LLC
See all 55 reviews
Nearby Hotels 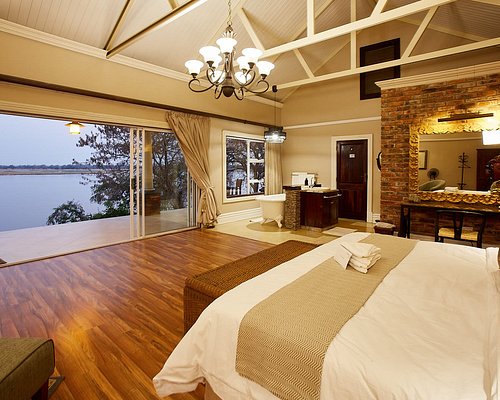 Breakfast included
Zambezi Grande Private Game Experience
US$1 400
Tripadvisor
View deal
Pay up to 12X
Hotels.com
Expedia.com
US$1 400
CheapTickets
US$1 400
View all 7 deals from US$1 400
16 reviews
1.8 km from Zambezi Expeditions
We compared the lowest prices from 7 websites 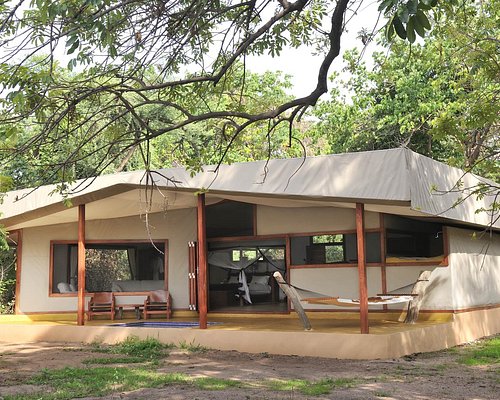 All Inclusive
Potato Bush Camp
US$2 100 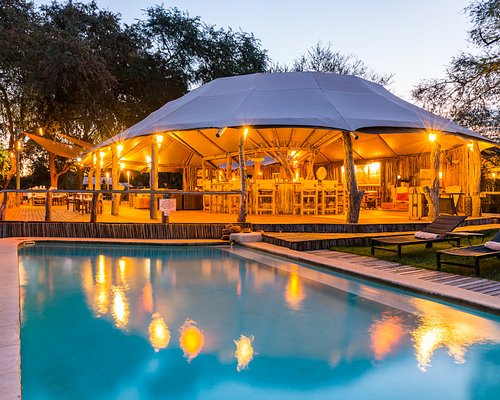 All Inclusive
Anabezi Camp
US$2 880
Tripadvisor
View deal
Pay up to 12X
Hotels.com
Expedia.com
US$2 880
CheapTickets
US$2 880
View all 5 deals from US$2 880
83 reviews
54.0 km from Zambezi Expeditions
We compared the lowest prices from 5 websites
Breakfast included
Amanzi Camp

My husband I stayed 3 nights with friends and fellow photographers. The staff were absolutely outstanding, they treated us like VIPs. You were looked after and made feel very safe. You were escorted to you tent each night with a guide. The food and accommodation were 5 star. We can’t wait to stay again.

Thank you for this lovely feedback, we can't wait to welcome you back again. I will be sure to share this wonderful feedback with our team.

Until we meet again, keep well.

Report response as inappropriateThank you. We appreciate your input.
This response is the subjective opinion of the management representative and not of TripAdvisor LLC
736steffip
Maun, Botswana
91
Reviewed 10 May 2019
Simple little bush camp in top location and superb guides & staff

we went to stay at Zambezi Expedition this month and really loved it. Cloud our guide was superb and as good as they get. The setting of the camp on the river is priceless. Game viewing was excellent, with a pack of 18 wild dogs to top it all.

Thank you for this lovely review and for taking the time to write it. Cloud really is a wonderful asset to our team and he will be thrilled to hear this lovely feedback.

We do look forward to welcoming you back in the near future until then keep well.

Report response as inappropriateThank you. We appreciate your input.
This response is the subjective opinion of the management representative and not of TripAdvisor LLC
sheltydog2005
Washington, DC
9071
Reviewed 7 May 2019
Thrilling Time in the Bush

I had a terrific time at Zambezi Expeditions Camp. The staff was extremely friendly and polite. The game viewing, especially the dogs, is amazing. I canoed on the river with hippos and then went fishing. The guide I had, Cloud, was extremely knowledgeable about the area and the culture. Fantastic time.

Thank you for this wonderful review. Isn't it so invigorating canoeing long side the hippo?

I will be sure to pass on this wonderful feedback to our team on the ground.

We hope to welcome you back in the near future until then keep well.

Report response as inappropriateThank you. We appreciate your input.
This response is the subjective opinion of the management representative and not of TripAdvisor LLC
susany279
Cat Spring, Texas
35357
Reviewed 26 April 2019 via mobile
Basic but our favorite

We arrived April 17 and did not want to leave. Of the 3 camps ABC operates in Mana Pools this is by far the most basic and our favorite. The staff is terrific - and chef produced wonderful food.
They operate on solar power and brought us perfect temperature water for our “bucket shower”
The tent had plenty of light and cross ventilation.
They offered a canoe ride which we always like.
Our guide T.K was a fabulous spotter and we were delighted to see the Painted Dogs several times. We have have been in the Mana Pools area multiple times and it is always a highlight when we get to see the Dogs.
The only negative is that because they are in the National Park you have to be in camp by dark- NOT mentioned anyplace that we saw on their web site.

Hi Susan, thank you for this wonderful feedback. Zambezi Expeditions truly offers the essence of an authentic safari.

I do appreciate you taking the time to write this review, I will be sure to share such wonderful praise to all our team.

I hope we have the honour of welcoming you back again in the near future. Until then keep well.

Report response as inappropriateThank you. We appreciate your input.
This response is the subjective opinion of the management representative and not of TripAdvisor LLC
hamilton57
Manchester, United Kingdom
4
Reviewed 29 January 2019
Incredible Experience

This is a very comfortable bush camp on the banks of the Zambezi river in Mana Pools. It is very remote and is accessed by flying into one of the airstrips. The area is accessible to self-drive vehicles but there were very few and we saw hardly anyone else.

When we arrived in camp we were given cool drinks and seated with a view of the Zambezi where elephants were drinking, which then wandered through camp.

The bathroom at the rear of the tent was open to the sky, with a separate entrance at the side where staff brought hot water for the ‘bucket’ shower any time you wanted.

There was a covered lounge area where lunch and dinner were eaten, with comfortable armchairs and sofas, and the bar where you could help yourself at any time, although more often than not, there were staff around to serve you.

An early, light breakfast was taken outside around the camp fire and one morning an elephant walked right past the table. In fact, elephants frequently walked through camp and there was also a ‘resident’ hippo which seemed to like sleeping around camp. One evening when we were escorted back to our tents the hippo was sleeping under a tree and also a hyena could be seen walking past the camp.

Our guide, Cloud, was brilliant. His knowledge of the wildlife and the area was second to none and his sense of humour entertained us, especially in his interactions with the wonderful camp host, Daufus. Kingsley, the head guide and camp manager, led us on walking safaris when we were lucky enough to see a lioness.

We also went canoeing down the Zambezi, each canoe having a member of staff doing most of the paddling. This was a fantastic experience, and we saw plenty of hippos and elephants.

The food was extremely good: one evening we had an African themed dinner where we were encouraged to try mopani worms, although this was not compulsory!

All the staff at this camp were incredibly friendly and the service was first class. We would not hesitate to recommend staying here.

Wow! Such an incredible review for a wonderful in-house team. Thank you for acknowledging our team and all that they do, I will be sure to share this wonderful praise with them. Zambezi Expeditions is such a special place in the heart of Mana Pools National Park, I am thrilled that you utilized all the safari experiences... isn't the Mokoro paddle such a one of a kind experience?

Mitch the resident hippo is still around and finds himself very much at home amongst the camp.

We hope to welcome you back in the near future, thank you once more for this lovely review.

Report response as inappropriateThank you. We appreciate your input.
This response is the subjective opinion of the management representative and not of TripAdvisor LLC
View more reviews
PreviousNext
1…345…