Thornybush Game Lodge
Lowest prices for your stay
Check In— / — / —
Check Out— / — / —
Guests 1 room, 2 adults, 0 childrenGuests 12
Book 9+ rooms
Age
Update
Book now! This hotel is likely to sell out soon.
Lock in the lowest price from these sites

Thornybush is an amazing escape from it all. From the moment we arrived we were welcomed by the staff who showed us to our lovely rooms. We thought since we arrived later in the day we would have to forgo a safari that day but they got us right out in the Bush and what a treat it was!!
Ever day the food was superb. I can not say enough positive things about our tracker John and guide Rudy. The knowledge between the two of them was outstanding! Definitely consider Thornybush for your SafariMore

Hi there felicia142, thank-you so much for leaving this review of your stay at Thornybush Game Lodge.

We're so pleased that you had an amazing time here with us and that you got to experience the bush in all it's splendor :)

Hopefully we'll get to play host to you once again at some point in the future - until then, take care.

Report response as inappropriateThank you. We appreciate your input.
This response is the subjective opinion of the management representative and not of TripAdvisor LLC
See all 539 reviews
Nearby Hotels 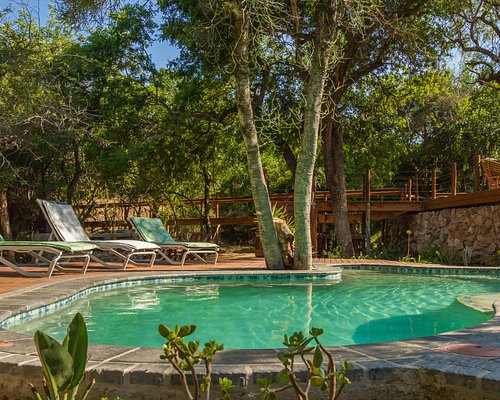 Breakfast included
Panzi Lodge
US$200
Booking.com
View Deal
Hotels.com
US$176
Expedia.com
US$179
eDreams
US$200
View all 12 deals from US$176
106 reviews
13.5 km from Thornybush Game Lodge
We compared the lowest prices from 12 websites 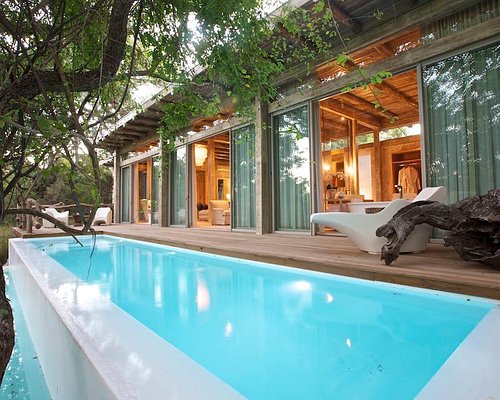 Top Rated
All Inclusive
Kapama Karula
US$938
US$808 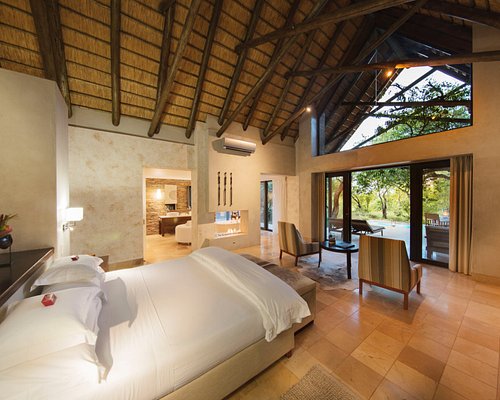 Luxury chalet accommodation, charming staff and great food. All this and you get to go on safari with the most professional trackers and guides. You are almost assured of ticking off the big 5 and if you don’t then it is not for the lack of trying, All this with the most amazing sunsets and sundowner drinks. An absolute highlight of the 6 game parks visited in Africa.

Room tip: They are all great, but choose close to the main area if your not up to walking too fair. Guides escort you back to your chalet at night.
Ask jeanettemM353KN about Thornybush Game Lodge
Thank jeanettemM353KN

Hi there jeanettemM353KN, thank-you so much for leaving this review of your stay with us at Thornybush Game Lodge.

We're thrilled that you had a great time here with us and that you got to see the Big 5!

Hope to see you again in the near future.

Report response as inappropriateThank you. We appreciate your input.
This response is the subjective opinion of the management representative and not of TripAdvisor LLC
I9138JMdavids
Springwood, Australia
12
Reviewed 30 December 2019
If you only visit one Game Reserve then Thornybush is the place to go.

I wasn't sure what to expecdt when we arrived at Thornybush. It was the frist Game Reserve we went to in a trip that spanned 11 Games Resrves and National Parks across 7 African Countries including South Africa, Botswana, Tanzania, Kenya, Rwanda, Zambia and Zimbabwe. All the Reserves have highlights and we loved each of them for various reasons. However Thornybush was one of the standouts. The reasons are simple. The diversity of animals, the lack of competing touristsand the ability to get up really close are something many of the other reserves lack. For example when we were in Nagoran Goro crater, there was great wildlife but in one instance we had 58 4 wheel drdives encircling a pair of mating lions. Quite crowded and often annoying. In Thornybush you have a limit of two behicles at one time and everyone gets a turn. If a third wehicle approach it would wait until another one left and then would take its place. The guides were personable and knowledgable and the trackers acrually kept tabs on the animals and quickly tracked them down for viewing. The only downside was that they dont have the volume of animals e.f. a herd of Zebra might consist of 6 to 30 animals as opposed to Maasai Mara where they have tens of thousands in one place. That being said we were able to get within 5 metres of Leopard, Cheetah, Lions, Elephant and within 10 metres of Buffalo. We saw all the big 5 in this reserve, where as we only saw another Leopard (and not well in Chobe at Botswana). In addition the staff were friendly, attentive and excorted you to your cabin each night. The cabines are extremely comfortable and luxurious. They are almost suites and each has a personal veranhad where you can sit and watch animals in your back yard. The food was also excellent. The 4 wheel drive vehicles that you travel in are open air with a tiered seating structure so that everyone can see. I can't think of anything negative to say about the place and thoroughly recommend it. In closing, if you desire seeing a diversity of animals and only want to go to one place where it's very comfortable and a joy for the whole experience then Thornybush is my recommendation. You wont be disappointed.

Room tip: All cabins are separate and have verandahs facing river bed or water hole locations , so all are good.
Ask I9138JMdavids about Thornybush Game Lodge
2  Thank I9138JMdavids

Hi there I9138JMdavids, thank-you so much for leaving this detailed review of your stay at Thornybush Game Lodge.

Thank-you so much for highlighting what made Thornybush stand out amongst the other lodges you visited, as you said, every area has their own unique 'selling points', and it's so lovely to hear what your experience here was like.

Hopefully we'll see you back again some day - until then, take care.

Report response as inappropriateThank you. We appreciate your input.
This response is the subjective opinion of the management representative and not of TripAdvisor LLC
Leopolde45
London, United Kingdom
3337
Reviewed 23 December 2019 via mobile
Unforgettable Safari

We came here before staying at the Sabi Sands Game Reserve (both great private reserves) and greatly enjoyed the experience. The staff were especially friendly & helpful (particularly for the 6am game drives) and the food was fabulous - feasts laid out on the platform in front of the watering hole consisting of all sorts of delicious African fare - unforgettable!. The rooms were equally pleasant, with super comfortable double beds with the best hotel pillows I've ever had the pleasure of resting my head on.

Hi there Leopolde45, thank-you so much for leaving this review of your stay at Thornybush Game Lodge!

We're so pleased that you had an unforgettable time here with us and that you enjoyed the breakfasts - and that our pillows we were well received :)

Hope to see you back again in the near future.

Report response as inappropriateThank you. We appreciate your input.
This response is the subjective opinion of the management representative and not of TripAdvisor LLC
WayneM2640
63
Reviewed 5 December 2019
Best safari! superb!

What an absolute treat. literally the best ive been to. We saw the BIG 5! Food incredible. Service is astonishing. Rangers, trackers, 5 stars. The staff csnt do more for you. absolutely spotless. no feeling like it ,as you sleep in the most luxurious tent/chalet.

If you want ouotdoor tenting, this is NOT for you! it is a beautiful Chalet with tent material on the roof. don't look further.

Hi there WayneM2640, thank-you so much for leaving this review of your stay at Thornybush Game Lodge!

We're so happy that you had a superb time here with us and that you got to see the Big 5.

We hope to see you back again at some point in the not too distant future.

Report response as inappropriateThank you. We appreciate your input.
This response is the subjective opinion of the management representative and not of TripAdvisor LLC
Tessa H
41
Reviewed 11 November 2019
Best place to stay for a safari!

Thornybush is absolutely amazing, I will be back for sure! The staff are so lovely and friendly, rooms are beautiful and well maintained. Food is delicious and there is so much to choose from, we have three vegetarians and they catered well above and beyond. Game drives were incredible as we were able to go off track (before rainy season) and get very close to the animals without disturbing them. All the game drivers and trackers are fantastic and ask you specifically what you would like to see. The whole resort was very relaxing and wildlife are free to roam! Would highly recommend!

Hi there Tessa H, thank-you so much for leaving this review of your stay at Thornybush Game Lodge. We're thrilled that you had such an amazing time here with us and we look forward to welcoming you back again some day in the near future. Till then, take care!

Report response as inappropriateThank you. We appreciate your input.
This response is the subjective opinion of the management representative and not of TripAdvisor LLC
View more reviews
PreviousNext
1…345…90