Went for three nights and had the best Safari experience! Prince was a great driver and tour guide. We saw all of the big 5 multiple times and got up close and personal with some of the big cats! The ladies in the kitchen cooked some fantastic meals. If you want to have a great viewing of Africa's wildlife, then this is the place to be!

The large canvas tents added a unique experience, but had bug nets and a bathroom attached. it was very quite at night, and if there are no clouds, the stars are amazing. We could even had a few lions roaring in the distance!

As we went on to other accommodations after, the wildlife viewing did not compare to our safari experience we had with Prince.More 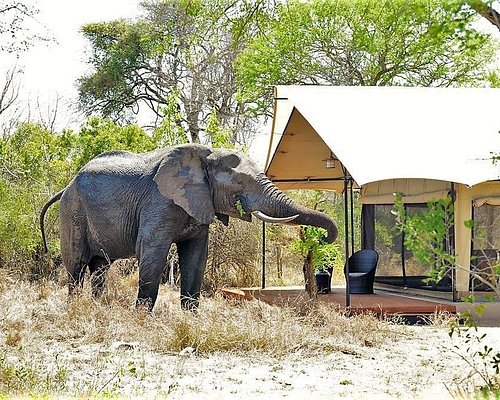 Expedia.com
View deal
Priceline
US$322
eDreams
US$322
Travelocity
View all 8 deals from US$322
459 reviews
5.2 km from Ndzhaka Tented Camp
We compared the lowest prices from 8 websites

When we arrived, we were warmly welcomed by Charlotte and Daphne. The tents are luxury and have a bathroom with a hot shower and a toilet. Ndzhaka tented camp is located near a small lake where a lot of wildlife is drinking from the water. The camp has no fences so the wildlife can also be spotted inside the camp. We saw an elephant walking in our backyard! Lunch, dinner and breakfast are cooked well and they have enough vegetarian options. You eat together with other guests, which was a great wat to get to know each other. In the evening, there was a nice campfire. The gamedrives are an experience and our guides Prince and Bongani are really cool! In the morning it can be quite cold so make sure you bring a warm jacket. Earplugs at night could be useful because of the sound of the animals. It is quite expensive, but worth every penny. Highly recommended to stay here one or two nights!

Room tip: Tents appear to be the same. Bring earplugs, you are sleeping in the wild...
Ask icchao about Ndzhaka Tented Camp
Thank icchao

This review is the subjective opinion of a TripAdvisor member and not of TripAdvisor LLC
L1aura
Lustenau, Austria
3
Reviewed 30 October 2019
Great small tented camp in the middle of the bush

We stayed for two nights in this simple, beautifully located camp in Manyeleti reserve and for us it was just perfect - we got up close with the Big 5 and many other animals on our drives, the food was great and the staff (guide and ladies in the camp) were nice and competent. The camp is unfenced, so you can even see animals in the camp. Do not expect luxury, everything is quite simple, but for nature lovers it is a great choice and we can defitely recommend a stay there!

This review is the subjective opinion of a TripAdvisor member and not of TripAdvisor LLC
mathieurp
Montreal, Canada
4215
Reviewed 3 October 2019 via mobile
Great value for money safari experience

We had selected Ndzhaka for our first safari experience based on good reviews and an attractive price. We were not disappointed. The Manyeleti reserve offered a wide variety of animals and no crowded areas. The team in place to take care of us was great.

Our guide, Prince, is very knowledgeable, experienced and very friendly. In the three days we were on site, he was able to show us everything we hoped for and more. No promises upfront, as all this is unpredictable, but a commitment to make all efforts to find the nice experience that makes the difference.

The camp itself is nice, the tents are comfortable and the food was surprisingly good, better than expected. We definitely recommend for those that want a more affordable way to experience game drives around Kruger.

We spent 3 nights in Ndzhaka, just amazing!!!! The lodge is very comfortable, there are no fences so animals walk around all day, elephants, hyenas and nyalas visited the lodge. The food is very nice and the staff are really friendly. We saw the big 5 in 3 days, lions eating a giraffe, a leopard eating an impala.............
At night you can hear the lions roaring , elephants trumpeting.......amazing. If you like nature ....Ndzhaka is the place to stay.
Thanks Prince, Fani and all the staff for everything. Hope to come back soon.

This review is the subjective opinion of a TripAdvisor member and not of TripAdvisor LLC
Blonde_Chick_Oz
Adelaide, Australia
74
Reviewed 17 January 2019
No Frills Genuine Safari Experience

I stayed at Ndzhaka camp for 3 nights over the Xmas period. This camp is a no frills accommodation but has everything necessary for an enjoyable safari experience. The camp was hot and arid on arrival but torrential rain during the second day caused an amazing transformation with rivers and pools of water appearing in a matter of hours. Camp attendants Charlotte and Adelaide were friendly and accommodating. Meals were basic but satisfying, water and juice are provided and a refrigerator is available in the common area for guests to use for their own beverages – it would have been useful to know this before I arrived so as to bring something for ‘sundowners’ which were otherwise restricted to bottled water. Power is only available in the common area, not in the tents, though there was plenty of room for the collection of i-phones and camera chargers. My fixed tent was well-equipped with comfortable bed and mosquito net, hot shower, toilet and vanity. A deck with chairs provided a place to relax and enjoy the bird life and nyala inhabiting the camp. The only problem was the water entered the tent during the rain that occurred one afternoon and saturated a lot of my belongings owing to window coverings being raised during the day. There was very little hanging space to allow clothing to dry without risk of getting wet during further downpours. The game drives were interesting, especially the transformation of the terrain following the rainfall. We were lucky to see the big 5 on the first evening drive and also encountered a pack of wild dogs. Subsequent game drives were less productive due to rain, with spectacular thunder and lightning shows. Off-road travel was restricted over the next 2 days owing to the risk of being bogged making close encounters difficult. We were also without a tracker who was unwell and not able to be replaced, and as such our driver Prince had to fill both roles which seemed to create added stress, though he did an adequate job and made use of contact with other vehicles to find the wildlife. Watching hyenas chasing wild dogs whilst a group of vultures swarmed on the prey was quite interesting. Overall, this is a comfortable and cost effective safari experience that would suit those enjoying a safari for their first time and who prefer a more down to earth experience without the need for unnecessary extras and luxuries offered by some of the other lodges and camps.

This review is the subjective opinion of a TripAdvisor member and not of TripAdvisor LLC
View more reviews
PreviousNext
12…
<script type='text/javascript' crossorigin='anonymous' async onerror='__scriptLoadError(this,true);'