US$215
View deal
TravelocityUS$218
CheapTicketsUS$218
Orbitz.comUS$218
View all 12 deals
Prices above are provided by partners for one room, with variable occupancy rules as provided by the property, and do not include all taxes and fees. Please see our partners for full details.
XhosaTraveler
Durban, South Africa
10

Royal Thonga is a lovely establishment. The rooms are simple, comfortable and stylish. The food tastes really good and the dinning area is beautiful. It is best for a quiet family or romantic holiday, not so much for business. Getting a phone signal was a problem. More

We thank you so much for your feedback; it's great to see from your review that you had a favorable experience with us.

It's a true honor to be able to respond to your review; if you can remember, you had booked during our first week having full time running electricity. Since then, our cellphone signal has definitely improved over time in our area.

We hope that you also enjoyed the community Umthayi (Marula) Festival as we truly look forward to welcoming you back to Royal Thonga Safari Lodge.

Report response as inappropriateThank you. We appreciate your input.
This response is the subjective opinion of the management representative and not of TripAdvisor LLC
See all 141 reviews
Nearby Hotels 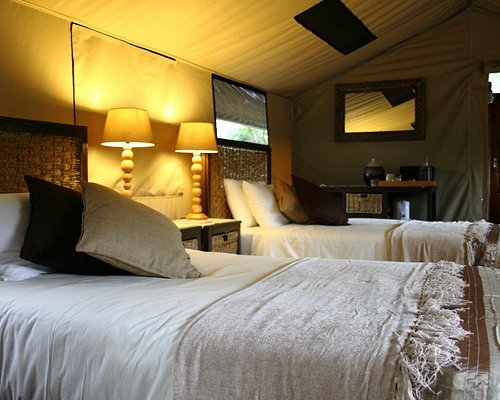 Top Rated
All Inclusive
Tembe Elephant Park
US$208
US$165
Booking.com
View deal
Expedia.com
US$208
Hotels.com
US$208
Priceline
US$175
View all 10 deals from US$165
352 reviews
12.8 km from Royal Thonga Safari Lodge
We compared the lowest prices from 10 websites 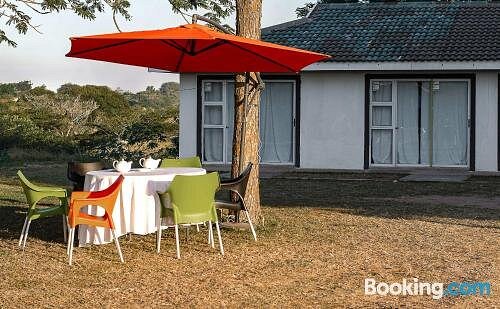 We were disappointed with certain aspects of our stay. The receptionist/bar lady was incompetent. Did not know what whiskey was, couldn’t help some German guests to serve them a gin & tonic. The food was good but basic. We requested a fan and were told that there are only 4 fans in total and that these had been allocated to other guests. There 14 rooms in total!! The rooms were clean and comfortable. Staff were pleasant, but need more training

This review is the subjective opinion of a Tripadvisor member and not of TripAdvisor LLC.
Zimbabwe1989
Wurzburg, Germany
6734
Reviewed 26 February 2019
Great African Style Lodge

This lodge is wondeful! It is off the beaten track, which makes it so peaceful, yet directly at Tembe Elephant Park! There is no wifi and electricity only 3h in the morning and 3h in the evening. I thought that was great, as I like living in the most natural settings to enjoy Africa's beauty. There are boardwalks connecting the lodges, a pool and a lovely dining/lounge area. The staff is wonderful and the game drives are great! The guide finds game even in the thickest bush! The food is good and the beds comfortable. Everyone has their own chalet with outside shower and mosquito nets above the beds.
Highly recommended!

Review collected in partnership with this hotel
This business uses tools provided by Tripadvisor (or one of its official Review Collection Partners) to encourage and collect guest reviews, including this one.
Ask Zimbabwe1989 about Royal Thonga Safari Lodge
Thank Zimbabwe1989

This review is the subjective opinion of a Tripadvisor member and not of TripAdvisor LLC.
R7331ISmichelleo
Pretoria, South Africa
3
Reviewed 12 January 2019
Two day visit Tembe

A bit of a disappointment. Food was below standard and so little, you were afraid to eat enough else someone other guest gets nothing. Unfortunately not all the staff, especially in the bar, kitchen and serving staff are well trained or well versed. Mice are protected even though they can become a plague. A nasty night visitor permanently moved inn

Review collected in partnership with this hotel
This business uses tools provided by Tripadvisor (or one of its official Review Collection Partners) to encourage and collect guest reviews, including this one.
Ask R7331ISmichelleo about Royal Thonga Safari Lodge
Thank R7331ISmichelleo

This review is the subjective opinion of a Tripadvisor member and not of TripAdvisor LLC.
Annelize v
Durban, South Africa
22
Reviewed 7 November 2018
Absolutely amazing place!

This was an amazing experience! Beautiful lodge, Comfortable rooms, Amazing food, Friendly staff and an overall tranquil environment! I love the idea that there is no WiFi and limited electricity. This is a perfect place for quality family time.

Thank you for the 5 stars! Its so encouraging when our hard work resonates through to a great experience. Every staff member is informed about every review so just know that your 5 stars was appreciated by the whole Royal Thonga family :)

Report response as inappropriateThank you. We appreciate your input.
This response is the subjective opinion of the management representative and not of TripAdvisor LLC
sallygK2969YO
North Carolina
9651
Reviewed 3 October 2018 via mobile
Enjoyable stay but needs some improvements

We enjoyed our stay here but I can only give it 3 stars for a number of reasons. Let's start with the positives, very friendly and welcoming staff particularly Wendy and Sia. Thanks for being so accommodating and attentive. Food was mostly good and sometimes excellent although limited in choice - which was understandable given the low numbers of guests. The restaurant and bar area is  a beautiful well lit structure with a central fireplace - a great area for our group to hang out and  chat. The rooms were clean and well furnished with a comfortable king bed and mosquito net.  Although we arrived on a 102 degree day the room cooled down supprisingly well overnight. Our next two days were cooler and we found ourselves more comfortable overnight here than at some other lodges where we had a/c. The limited availability of power was not a major issue as were expecting it. It helped us to enjoy the sounds of the bush at night and to appreciate our conveniences back home!

And so on to where some more work is needed. The lack of WiFi is unacceptable if you want international guests. Most international travelers are not able to use cellular due to high roaming charges and locked phones preventing the use of local sims. The  cellular access was spotty and only available in the restaurant and reception areas for a few hours each day. The hot water system in the rooms is based on a on-demand propane gas tank which makes regulating the shower temperature very difficult. The terrain of the park is dense bush, making sightings difficult unless the animals were relatively close to the road. The roads were very narrow and there were frequent over-hanging branches which sidewiped the vehicles - these should be trimmed by park management before someone loses an eye. The drivers were careful navigating past these branches but even riding up on the far side of the road could not avoid the worst.The winding narrow sandy roads and dense bush meant that we sometimes rounded a corner to find animals unexpectedly very close to us, startling both the animals and us, leading us to be concerned about the potential for encounters turning dangerous, more so than in other parks we have visited with more open terrain where the animals could see us approaching from some distance away. The local guides need some development. Their English was heavily accented and very difficult to understand, or even hear past the front row of seats in the Safari vehicle. Gugu was the better driver and communicator. Some kind of speaker system for those in the back is needed.  Fortunately our own tour guide accompanied us on our next drive, during which our driver said very little. Drivers were friendly but on the inevitable days when there is not much game to see, they need to be prepared to show us birds, which are plentiful - more here than anywhere we have been in SA - or plants or something of interest - not just provide a taxi service. Also their information was sometimes incorrect for example telling us that we had just seen the only one wildebeest left in the park, only for us to happen across 3 wildebeest standing together the following day.

Regardless, we enjoyed our stay very much and offer this feedback as constructive suggestions on where Royal Tonga needs to invest for their future success with international guests.

Thank you for such a balanced review. Seldom do people take the time to be constructive about their feedback.

I have personally contacted the custodian manager of the park to give feedback about the roads, hopefully they will take some action.

Not much can be done to change the accent of the guides and I am sorry that understanding them was difficult. I think a speaker system is an interesting idea as this would probably help resolve part of the accent problem if you could hear more clearly, however the speaker system would possibly impact the animals and reduce your viewing experience. The animals are used to vehicle sounds but certainly not human voices on loud speaker. I do think it is something to think about however as you raise some good points about not being able to hear further back in the vehicle. I have sent your feedback to management for consideration, perhaps we could try it on 1 vehicle and see what difference/impact it has.

Your game drive should not have felt like a taxi service and I am disappointed the hear that. Vesi is actually a very keen birder and its a shame your game drive was inadequate. Perhaps there was a miscommunication about the wildebeest, it seems odd that the ranger would say that. The manager was informed so that the rangers could be addressed and have more training about their communication.

Thank you once again for the fair points you raised, most people don't realize this but we discuss every single review as a group and try understand what we are doing well and where we need to improve our service.

Report response as inappropriateThank you. We appreciate your input.
This response is the subjective opinion of the management representative and not of TripAdvisor LLC
View more reviews
PreviousNext
1…567…