Not as bad as I feared, Still pretty... - Caledonian Hotel

US$109
US$101
View deal
Orbitz.com
Booking.com
ZenHotels.comUS$109
View all 16 deals
* Prices are provided by our partners, and reflect average nightly room rates, including taxes and fees that are fixed, known to our partners, and due at time of booking. Please see our partners for more details.
Richard P
Ashford, Kent
384223

Not as bad as I feared, Still pretty bad though.

Looks like the Addams Family mansion from the outside and appears horribly dilapidated in places, so given the poor reviews I was expecting the worst. The lobby is less run down than the building, the staff generally friendly and the rooms tired but clean and usable. Breakfast also was better than anticipated.

In essence, the Caledonian is a perfectly serviceable old-school overnight hotel; dated, run-down (in which respects it perfectly reflects the town that surrounds it) and noisy (unlike the town that surrounds it, which is about as likely and welcoming as a crypt after 6pm), and if a room was £50 that would be OK-ish. Price would reflect the offering. That's the problem; perhaps because it has a seeming monopoly on hotel accom, the room rate of £100 for a twin is appalling VFM. I've stayed in better places in Scotland, in 2021, for just over half of that.

If I lived in Ullapool, I'd try to open a hotel with a restaurant. With the growing popularity of the NC500, the ferry port, and other local business that seemingly don't want to re-open and make the most of the opportunities as the pandemic recedes, I reckon an enthusiastic new entrepreneur could do very nicely; the competition is weak.More 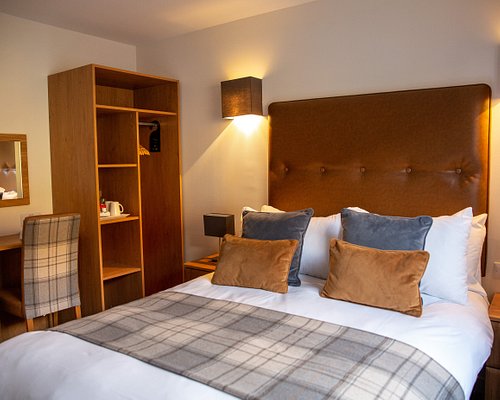 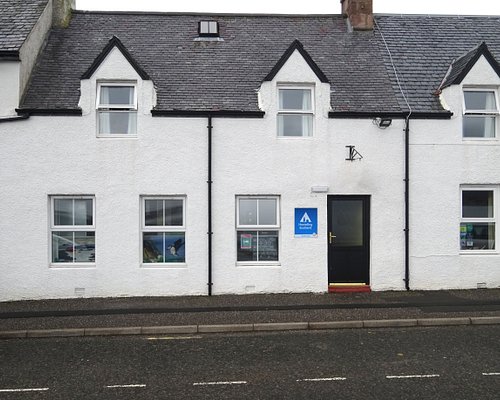 Travelocity
View deal
Hotels.com
Expedia.com
US$129
Orbitz.com
View all 11 deals from US$129
83 reviews
0.3 km from Caledonian Hotel
We compared the lowest prices from 11 websites 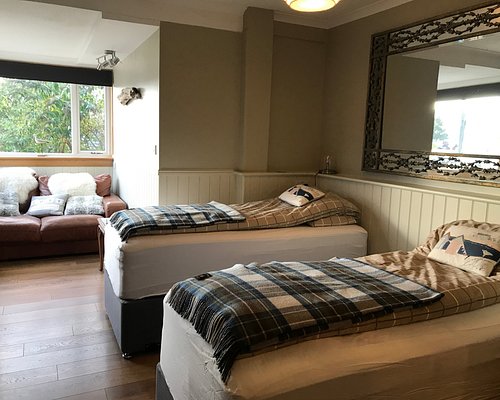 The hotel team were welcoming on arrival that’s the only good thing, when I complained about the room I was offered an alternative just as bad , I was told the hotel was tired and in need of a refurbishment, an understatement of the highest order, it needs gutting and taken out of the 19th century £100 a night!!!!!
Do not stay there!!!!!!

This review is the subjective opinion of a Tripadvisor member and not of TripAdvisor LLC.
callums444
Edinburgh, United Kingdom
4
Reviewed 27 July 2021 via mobile
Support local. Don’t stay here.

The hotel has a monopoly for those completing the NC500 and it served a purpose of a bed for the night. It was the worst bed, thinnest mattress and most uncomfortable nights sleep I’ve had.

The room was dated, poorly kept squeaky. The floor didn’t just squeak in one place, the whole room was squeaky. The slightest movement resulted in a hideous noise.

The bathroom was a horrible example of a dated and poorly maintained room. The non-slip mat that recommended was yellow.

The staff on the whole were fine, other than one member of staff who approached us in the bar and interrogated us about what we thought of the room (this was before we’d even slept in it). The honest and fair feedback wasn’t well received and she was very defensive and irate when she heard something she didn’t like.

Do not stay here.

This review is the subjective opinion of a Tripadvisor member and not of TripAdvisor LLC.
richardgD7025SF
3
Reviewed 27 July 2021
Noisy

We stayed here for night due to needing work doing on our van, we’re glad to be able to get in somewhere however think we should have stayed in the van overnight on the industrial estate! The beds were comfy and the shower was ok the hotel and rooms are incredibly dated!

However for the price of the hotel I would have expected a higher standard of accommodation the most frustrating part was being awoken by the people above on the incredibly creaky floorboard they persisted with hours of walking around their room and this was very annoying also I appreciate we are on the coast but the seagulls nesting and waking up at 5am and still hearing them with the window closed was some what of an annoyance. The doors are thin so you can hear everything going on in the corridor.

Did I have a relaxed chilled sleep no but I was glad of the shower and facilities however not at all worth the money you pay!

I except that we were fortunate to get a room at so short notice but now I understand why. This is such a beautiful old building that with a bit of TLC could be something special such a shame however the staff are friendly and approachable.

This review is the subjective opinion of a Tripadvisor member and not of TripAdvisor LLC.
Graeme W
Edinburgh, United Kingdom
4815
Reviewed 20 July 2021
Trip

Stayed here for 1 night while touring the North Coast 500 and found the hotel absolutely fine.

It's an older building and could do with a facelift but it was clean and comfortable and I'd be happy to stay here again.

Any slight defects in the hotel were compensated for by the staff who were friendly and efficient. Not knowing what time we'd get to Ullapool we hadn't booked a table for our evening meal so had some issues finding somewhere to fit us in. The hotel staff were more than happy for us to get a takeaway and sit in the lounge to eat it. And provided plates and cutlery.

This review is the subjective opinion of a Tripadvisor member and not of TripAdvisor LLC.
jim m
4
Reviewed 17 July 2021
Shabby Hotel

This review is the subjective opinion of a Tripadvisor member and not of TripAdvisor LLC.
View more reviews
PreviousNext
1…456…
<script type='text/javascript' crossorigin='anonymous' asy