This hotel is located just off the main road through to Oludeniz beach - easy walking distance. The hotel itself is clean and the rooms immaculate. The bar staff (Mustafa & co) were excellent and very welcoming. Breakfast is basic, but typical of other hotels. The pool is small but perfect for cooling down or relaxing in. Extra payment is needed for the use of a safe £25 which I considered to be expensive when most hotels offer this for no charge.

Trip type: Travelled as a couple
See all 830 reviews
Nearby Hotels 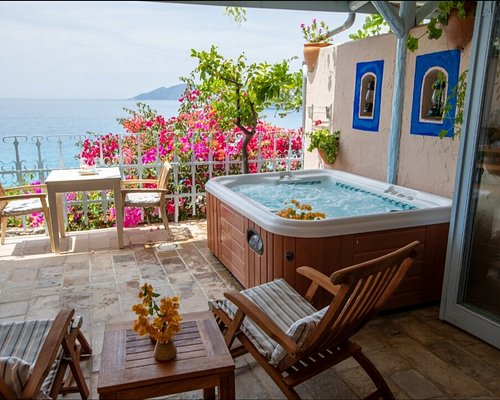 We stayed at the hotel in may just before the season started. The hotel was amazing the best holiday by far. The food was delicious. The rooms were clean and tidy and the staff were so so so friendly especially musfafa, bilal, bayram, george and suleyman we made some friends for life. We can't wait to go back next year and we will be staying for longer next time. We miss it so much already

This review is the subjective opinion of a Tripadvisor member and not of TripAdvisor LLC.
Lorraine S
Manchester
1722
Reviewed 19 May 2013
If you want to relax this is not the place to stay

We have just returned from a 10 day trip to Olu Deniz. We paid to stay at the Blue Lagoon but ended up leaving 5 days into our trip. The hotel itself is clean and seemed basic but perfectly fine upon arrival. The problem's began when we realized how loud the bass was on the stereo. Our room location probably didn't help as we were directly over looking the pool facing the bar area. We asked the staff to turn it down but they didn't and said we were the only one's complaining (I know this to be untrue as we spoke to a few who said the same about the bass). We were the youngest people in the hotel (apart from children) so I can't see the clientele wanting to listen to Ibiza house anthems at full blast (unless they were having some sort of mid-life crisis or were deaf..probably the latter). Our complaints clearly went down badly with the staff as they started being funny with us. We decided not to spend any more money there due to this and gave our 'credit' card back. This obviously annoyed them further (they are only interested in you if you are spending all your money there). We complained to the rep, to no avail. After an all day trip to Tlos we were shattered and wanted to have an hour's chill out before getting ready to go out. Think again! Booming bass blasting. We'd had enough. The final straw came when we'd arranged for a meal out in Fetiye and the rep left us a note saying the pick up would be an hour late. The hotel manager didn't pass the message on and left us sat in reception for 45 minutes wondering what was going on while he watched us sat there. I've never stayed anywhere in Turkey where the staff were so unprofessional. If you want to get no sleep, be pestered to death by pervy staff, eat an inedible breakfast and generally be treated like dirt if you don't spend your money here this is the place for you. If you want somewhere a bit more upmarket stay next door at the Belchan deluxe. It's a far superior hotel, decent breakfast, professional staff and a place you can really chill out.

This review is the subjective opinion of a Tripadvisor member and not of TripAdvisor LLC.
463Linda
Liverpool, United Kingdom
37
Reviewed 27 April 2013
Honeymoon

This review is the subjective opinion of a Tripadvisor member and not of TripAdvisor LLC.
rudrik55
Birmingham, United Kingdom
16
Reviewed 16 April 2013
pete& irene

stayed at the blue lagoon delux hotel in september /october 2012, this was the 5th year running that we have stayed in this hotel, from the minute we arrived we were greeted by the guys in receiption, who carried our bags too our room. the hotel is very clean the rooms are cleaned everyday, towels are changed daily, the staff are very friendly, we must give a special mention too george who we think makes your stay very enjoyable, also the bar staff we have too give a mention too these lads, mustafa /martin and the others you must ask mustafa for his special juice,we here they have changed the bathrooms this year, we have already booked for 2013 so see you all then.

Room tip: most of the rooms are good,
Ask rudrik55 about Blue Lagoon Hotel
6  Thank rudrik55

This review is the subjective opinion of a Tripadvisor member and not of TripAdvisor LLC.
Leah T
Kent, United Kingdom
612
Reviewed 12 March 2013
Great location

Me and my boyfriend stayed at the Blue Lagoon in October 2012, the view from the hotel is lovely. The best thing about this hotel is the location, there is so much to do in Turkey we loved it there. Use "Travel Mate" for your days out, they are professional and reliable.

We decided to go half board but hardly used this as the food isnt that special and there are so many great restaurants in the strip, if we were to go back to Oludeniz we wouldnt go half board as everywhere we went the food was lovely.

The hotel itself is ok for the money you pay for it, the guys that work there are really nice, and the cleaners are lovely, we read reviews about "George" and was a bit worried, but I think he left us alone because we had already paid for half board, although he did make me feel uncomfortable. When ever we left the hotel we would be questioned as to where we were going or all of the staff would stare. You cant take drinks/food to your room but this is easily done with a big bag.

Our first room was on the bottom floor around the pool, at that time of year it was very quite and relaxing. I am a very light sleeper though and the call for prayer would wake me up most mornings, so buy ear plugs if you are also a light sleeper.
Being on the bottom floor we could hear when upstairs used any water, toilet, shower as the pipes ran through our walls and was really quite loud, we didnt let any of the above affect us though.

We had trouble with our neighbours upstairs as they didnt like us smoking on our little balcony, the man became quite violent towards my boyfriend and a scene was caused which a lot of people saw and all believed we were in the right. So we asked reception to move them, they said no as the other family went home the day before us. So we asked to move instead and they were going to give us another room the same, as we were hesitant about this as we didnt feel we should be the ones to move they upgraded our room. It was a really nice room and I was really happy with it as we couldnt hear upstair's flushing the toilet or anything anymore and the room was much bigger.

But like I said the best thing about this hotel is the location, lovely views and the right distance from the strip, you walk down the road for about 2mins then your at the top of the strip, but far enough away that you dont hear the noise at night.

Turkey is great, so much to do, turkish baths, the market, scuba diving, boat trips.
(Just to note, some of the coaches for days out like scuba diving pick you up at 8am, but breakfast doesnt start until 8:30am)

The Blue Lagoon is an alryt hotel, I have no major complaints about it and its ok if you are just sleeping there (with an upgraded room) but I'm sure there are better hotels in Oludeniz.

I would definetly recommend going to Oludeniz I hope to go back again one day, but I wouldnt be staying in the Blue Lagoon.

Room tip: Have an upgraded room and have room only as restaurants on strip are excellent.
Ask Leah T about Blue Lagoon Hotel
6  Thank Leah T

This review is the subjective opinion of a Tripadvisor member and not of TripAdvisor LLC.
View more reviews
PreviousNext
1…888990…
<script type='text/javascript' crossorigin='anonymous' async onerror='__scriptLoadError(this,true);' src='https://static.tacdn.com/asse