Snaptravel
* Prices are provided by our partners, and reflect average nightly room rates, including taxes and fees that are fixed, known to our partners, and due at time of booking. Please see our partners for more details.
delone193
Johannesburg, South Africa
101

I want to thank the staff of the Soweto Hotel for their hospitality and excellence service they render. This hotel is a Gem and a must see/experience by everyone. Real African culture and the spirit of Soweto!

Trip type: Travelled on business
See all 12 reviews
Nearby Hotels 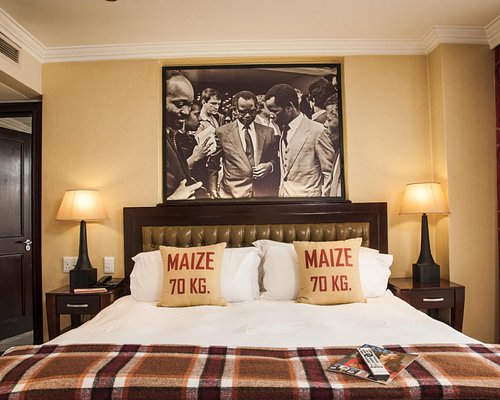 The Soweto Hotel on Freedom Square

This review is the subjective opinion of a TripAdvisor member and not of TripAdvisor LLC
jwashington1031
Douglasville, Georgia
2512
Reviewed 19 March 2017
Unfortunately, I cannot/would not recommend this place.

Typically when I am in Joburg I stay in Sandton or an airport hotel. This time I was very excited about staying in Soweto, a place that I really love to visit! I wanted to like this place! The rooms were very nice, and the decor in the lobby was really retro and inviting. The front desk staff were friendly enough and the place was clean. Why only one star, I'm sure you are asking?? Where this place falls down is the amenities -- the things you should be able to take for granted in a decent hotel. The wireless was a joke -- it never, ever worked and so I used my own international mifi device. On the first night of our two day stay we got to our room and the thermostat and television were both non-working. I called the desk and the woman came right away and moved us to a different room -- I can live without tv, but the broken thermostat was a deal breaker. We moved to an identical room across the hall. Everything worked, except the remote control which I called about and it was replaced the next day; the wifi of course did not work ever. The second day of our stay at 8am everything electrical stopped working except the lights. No thermostat, no electrical outlets -- Nothing. In three hours the electricity never came back on, so we checked out. Stuff happens, but it was just one more thing that was not in working order, which is exhausting and certainly not worth paying for. I purchased breakfast with the room. The first morning the breakfast was a traditional South African breakfast buffet and was very good. The second morning of course there was no electricity so the dining room was closed. The dining room had a respectable number of diners that first day for breakfast. But when my son and I had dinner in the dining room that night, we were surprised to be the only two diners in the restaurant -- I am pretty sure the occupancy was very, very low that night. The chef was accommodating and fixed us a delicious fish dinner with what he claimed was hake fish. Turns out that was not true! I found this out when I developed keiorrhea -- look it up; it is truly disgusting. Importantly, the only way you can get keiorrhea is if you eat butterfish -- which is banned in several countries and was clearly substituted for hake in the dining room. I was sick for two days. It is clear why this place is empty -- it looks great, but everything except the appearance is really pathetic. I do not recommend this place at all!! I was so disappointed. Next time I will stay at the bed and breakfast in Pimville and avoid this place completely. It is a hot mess!!

I think that the hotel shouldn't be compared with others. it is a paradox. the rooms are fantastic and the decor themed to the relevance of the location.
the hotel offers decent comfortable accomodation in the Historical cusp of South Africa.

This review is the subjective opinion of a TripAdvisor member and not of TripAdvisor LLC
TheRunawayFound
London, United Kingdom
179124
Reviewed 23 March 2013
On business

It's difficult for me to judge this hotel in terms of value, because I went on business and didn't pay. However, the staff were extremely friendly, the food was good, the drinks excellent and the room was very comfortable.

On the other hand the pool is a bit pathetic - no more than a plunge pool on the roof really - and the nightclub upstairs wasn't much good in the evening.

For business, 4*, for a holiday less.

This review is the subjective opinion of a TripAdvisor member and not of TripAdvisor LLC
moorish_i
Bangkok, Thailand
1221
Reviewed 8 August 2012
Average for Holiday Inn

I am a priority member of the IHC group hotels and stayed in many Holiday Inns in Asia and USA. This hotel falls a bit short from the rest. Location is excellent and safe, the compound is well guarded and the basement car park is also well lit. Parking is free just get the ticket stamped before your exit.
As a member we were given snacks and apple juice upon arrival at the check in counter. Then we were informed that there was free canapes and non alcoholic drinks between 6pm to 7pm at the Lime restaurant. We were not very hungry and before heading out in the evening we decided to check it out and at the restaurant they told us that is was at the Priority member lounge upstairs so we didn't get to see what they served.
Wi-fi was also free for priority members.
The room was extremely small (normal standard room). No bathrobe or slippers were provided. The amenities like bath gel and shampoo that came in a tube looked like they were recycled from the previous guest.
The check in and check out counter seemed under staff but they get things done, just takes some time.
THe concierge was excellent though, giving us proper directions on where we wanted to go to.

This review is the subjective opinion of a TripAdvisor member and not of TripAdvisor LLC
View more reviews
PreviousNext
12
<script type='text/javascript' crossorigin='anonymous' async onerror='__scriptLoadError(this,true);'