US$21
US$16
Free cancellation until 21/11/05
View deal
Booking.comUS$21
eDreamsUS$21
TripadvisorUS$16
Trip.com
Expedia.com
Travelocity
View all 10 deals
* Prices are provided by our partners, and reflect average nightly room rates, including taxes and fees that are fixed, known to our partners, and due at time of booking. Please see our partners for more details.
enriclzp86
Sabadell, Spain
77

We stayed two nights there. The staff was friendly and helpful. The breakfast was correct and the rooms were a little bit small but well-cleaned. You can rent bycicle for 50b per person and day. Nice and good spot

Trip type: Travelled with family
See all 241 reviews
Nearby Hotels 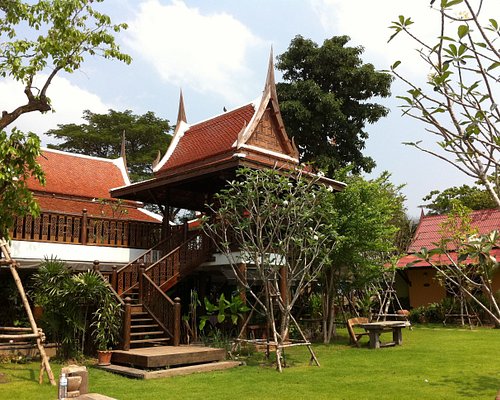 Hotels.com
View deal
Booking.com
US$39
Priceline
ZenHotels.com
US$51
View all 11 deals from US$39
961 reviews
3.1 km from The Old Palace Resort
We compared the lowest prices from 11 websites

Travelocity
View deal
Orbitz.com
Trip.com
US$65
Expedia.com
US$69
View all 14 deals from US$65
562 reviews
5.4 km from The Old Palace Resort
We compared the lowest prices from 14 websites
Ayodhara Village

Once we arRived to that place the feeling about it was suddenly bad by the man who welcomed me and my family and an old lady who looks like to be the boss. They made us feeling really unwellcomed and like intruders in their place. We very tired and hardly i got option to see the room. Than suddenly the lady forced to pay money first ,in advance ,quickly and cash even if i explained that i wanted to stay more days,rent motobike and have tours and have meals in the place.So i wanted to have just one final bill. So I offered my passaport as guarantee for the bill,felt like a cheater ,treathed as a cheater but she insisted i MUST PAY IN ADVANCE EVERY SINGLE THING I WANT. Naturally.....after few minutes me and my family left that place with such unconfortable attitude and we moved 300 meters away and checked in in one more resort with very professional attitude. The funny thing of this story is that in the previous reviews about this place there is one with absolutly same object. Bad attitude of the owner about money. Ayutthaya is full of resort with very professional hoster. STRONGLY NOT RACCOMANDED

Thank you for you comment.
We prefer the guests to pay when they arrived.
As the family ran the place and sometimes it is busy during the check out time. That why we have set this policy.

Thank you for understanding,
Krittika


Report response as inappropriateThank you. We appreciate your input.
This response is the subjective opinion of the management representative and not of TripAdvisor LLC
Sabeede
1
Reviewed 11 May 2019 via mobile
The perfect Ayutthaya experience

We had two wonderful nights at The Old Palace Resort. Nice and clean rooms in a very green and peaceful surrounding and fairly good location for sightseeing. We were overwhelmed by the outstandingly helpful and welcoming staff. The owners booked our train from Bangkok to Hua Hin for us and for a small fee even drove us to the train station at 4 a.m. in the morning since there were no tuk tuks avaliable at that time. If you want the perfect Ayutthaya experience, this is the place to stay at.

This review is the subjective opinion of a Tripadvisor member and not of TripAdvisor LLC.
Clearbluesky777
Iowa City, Iowa
22
Reviewed 17 April 2019 via mobile
The rotten Old $8 Palace!

We were on a long road trip covering Cambodia, Laos and Thailand. Ayyuthiya was a quick stop for us after a long two weeks journey. The people and the lodgings of Cambodia and Laos were so good that we expected a similar courteous behaviour...infact the place we stayed the previous night at Pak Chong, Ruan Kanchanok, set the bar very high and were a true model of Thai hospitality. But this run down Palace just ruined our vacation.

1.The behaviour of the staff
...mom and daughter runs the place I guess: We felt we were some kind of intruders into their home. The front office lady wanted to see the money first, a big sign even says you pay first. Of course we'll pay, at least have the courtesy to make us comfortable first, get off the phone and attend your guest?

It was strange that their behavior towards white Western people were markdly different, maybe they were purposefully rude to non Western looking people and was trying to keep it exclusively for selected profiles of people.

2. We felt cheated
The name: The Old Palace Resort and the posted pictures made us choose the place, hoping it will be a decent upscale family friendly place. Instead I found the place to be a broken down, dirty clump of rooms, banged up in a rotten old building, rot masked with putty and paint!

Maybe the place is good for backpackers looking for cheap rooms less than $8/night. Absolutely not worth the money we spent.

Room interior is a disaster waiting to happen with so many exposed live electrical wires, they obviously do not follow any electrical code. The hot water shower can electrocute you as it has open live wires joined up, the burnt plug sockets are a reminder of a fire hazzard in waiting. The exteriors of the place looks like trash cans dumped around.

All of these would have been ok if the staff  knew even the basics of hospitality without discrimination: need not go to the heights of "Atithi-Devo-Bhava...that means Guest is GOD" they only need to be helpful and willing to own up their short comings.

The air conditioning in the room leaked a tonne of water inside the room and soaked all our baggages and clothes. They were like, so what. The mother lady after several calls walked in like a jail supervisor, inspected the damage and walked away with an admonishing look in her face as if we made her air-conditioning to leak!

After several attempts they asked us to collect all our stuff, wet and dry to be moved to another room. No help was offered, nor any apology, instead had the audacity to shout at us and say it's not their fault. "If you don't like it take your money and leave". They'd say the same if their rusted rotted old palace fell over our head or their unsafe electrical wiring starts a fire. No value is given to the money that's paid for their service.

An understanding smile, an offer for help to make things right, and timely intervention to prevent things worsening is all that was needed. Instead they act like the queens of this rotten palace and we their low class subjects, we were have to do the extra work to get our comfort at their place, that too after paying top dollars!

Thank your comment.
Our Policy is our guests will pay the cost , after they check in. As we are family business and It is always busy in the next morning. so we are kindly ask our guests to pay before.
After an accident, the leaking of air-conditioner, we have offered the guests a new room,
but the guests rejected to move for a new room.
We are also offered for drying all wet cloths and help with all baggage.
Suddenly, we refused to serve them because the guests were being very impolite and overly rude.

Thank you for your complain.

Report response as inappropriateThank you. We appreciate your input.
This response is the subjective opinion of the management representative and not of TripAdvisor LLC
rickuk56
London, United Kingdom
10623
Reviewed 9 March 2019
Well run friendly hotel

Stayed overnight at hotel, found the girl at reception friendly and helpful. The bungalow was light and pleasant with, A/C and bathroom, outside seating area. The hotel was quiet and meals available, Transport was called to hotel for a tour and night visit. Bicycles available also. No hassles here, nothing was too much trouble

This review is the subjective opinion of a Tripadvisor member and not of TripAdvisor LLC.
BoyMansvelders
The Netherlands
2
Reviewed 14 February 2019 via mobile
Very nice people & resort

It is a very nice resort with extremely nice and helpful people. The rooms are nice and clean. It was cozy every evening during our stay. The resort is also close to several temples in Ayutthaya which you can visit by bike (rentable by the resort) or with the taxi/tuktuk. My girlfriend and me would definitely recommend this!