US$138
US$109
View deal
SAVE US$29
Hotels.comUS$137
Expedia.comUS$137
TravelocityUS$137
View all 16 deals
* Prices are provided by our partners, and reflect average nightly room rates, including taxes and fees that are fixed, known to our partners, and due at time of booking. Please see our partners for more details.
MartiESn
Stuttgart, Germany
613

Colorful, loud, fiesta as they say. Carnaval in Rio was like a dream. We spent 2 days in here itself, they had good programms which were fun and I think lots of other tourists came around.
The hotel is beautiful, you have your private beach, it's luxury and 24/7 alive. Nothing for relaxation, please be aware of that. But we came here exactly because of this.
Friends of us were here 2018 and celebrated carnaval too.

Rio is huge and the entire city is alive, from day to day. After 3 days in the city this was also enough for us and it was time to get on to Iguazu and home. Fiesta of our life time.More 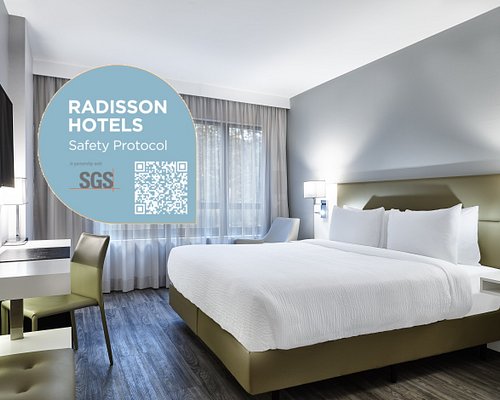 Hotels.com
View deal
Free cancellation
Pay up to 12X
Booking.com
US$141
FindHotel
US$90
Expedia.com
US$135
View all 16 deals from US$90
1 061 reviews
24.1 km from Sheraton Grand Rio Hotel & Resort
We compared the lowest prices from 16 websites
Breakfast included
Hotel Atlantico Prime
US$19

Hotels.com
View deal
Free cancellation
Pay up to 12X
Booking.com
US$19
Trip.com
US$18
Priceline
US$19
View all 15 deals from US$18
787 reviews
10.0 km from Sheraton Grand Rio Hotel & Resort
We compared the lowest prices from 15 websites
Breakfast included
Hotel Atlantico Business

Hotels.com
View deal
Booking.com
US$32
FindHotel
US$22
Expedia.com
US$24
View all 14 deals from US$22
1 311 reviews
4.4 km from Sheraton Grand Rio Hotel & Resort
We compared the lowest prices from 14 websites
Sponsored
Hilton Rio De Janeiro Copacabana
US$97

We enjoyed our stay at the Sheraton.
Friendly staff.
Very nice,spacious,clean room, super comfortable bed.
Gorgeous view of the beach and Ipanema
Excellent amenities, heated pool.
Excellent welcome at the Gym/ spa reception.
Very good service throughout the hotel.
Only let down was the breakfast room : just a big room,very school cafeteria like.
The worst bit was the smell from the omelette section. Even our hair stank of fried food. We needed to shower again and change clothes after breakfast .
Breakfast itself was a hit and miss. Not the lavish experience I have enjoyed at other Sheraton hotels .
Having said that, I would come again .

This review is the subjective opinion of a TripAdvisor member and not of TripAdvisor LLC
sfriesen
Wentzville, Missouri
24
Reviewed 29 February 2020 via mobile
No sleep, and lies

I get it, it’s Carnival week.. the city is loud, and it’s a big party.
However, the Sheraton needs to disclose that fact there is a NIGHTCLUB next door in this ‘quite side of Rio’ The club has ZERO respect for anyone.
It’s so loud, the hotel vibrates.
After a long flight the first night, we changed rooms just for the night and was ensured this was ONLY the Fat Tuesday celebration.
That was a LIE.
This club went on every single night.
We complained again on Friday afternoon, asking the reception to switch us to the other side of the building. The receptionist ensured us the ‘club was closed u til March 5’, but also stated that if there was an issue arise, he’d move us. Since I’ve already unpacked, and my son was sick.. we took the bait. We were vulnerable...
Well it was not closed.. It was wide open for business from 1am until (I kid you not..) 6:45am.
My husband went down stairs sometime in the middle of the night to change rooms, and there was ‘nothing available’ (which I can imagine nothing available in our room type)

So at this point, I’ll say the hotel is nice. The beach is nice. The wait staff, and kids club staff is nice. The pool was warm, and they give away warm towels for a night swim
I think for a Sheraton it brings in a louder crowd than we are used to. I understand the hotel can not help there is a night club next door. But this should be disclosed especially with families and ESPECIALLY when we’ve been ‘upgraded’ to the club side (nice view)
I’ll tell you what is most upsetting....the lies from reception and the gentleman telling us he’ll move us at midnight rather then 1 pm
.. and then this not even being possible.
We haven’t slept in 4 days. My son was sick last night..
As a loyal Marriott member, I’m very very disappointed..

On behalf of Sheraton Grand Rio I would like to thank you or your loyalty to Bonvoy as an Elite member and for your feedback from your stay with us.

We will keep in touch to find a solution.

I stay at your entire disposal.

Report response as inappropriateThank you. We appreciate your input.
This response is the subjective opinion of the management representative and not of TripAdvisor LLC
Ian A
Glasgow, United Kingdom
619
Reviewed 29 February 2020 via mobile
Do not book this hotel if you want sleep

Currently sitting awake again at 5am listening to the pounding base drum of the open air techno nightclub right next door to the hotel. The noise starts at 10pm and is relentless. How this was allowed to happen is astounding.

Thank you for taking the time to post your review.

Your feedback is extremely valuable to us, as we strive to improve with each and every stay.

On behalf of Sheraton Grand Rio Hotel & Resort, please kindly accept my sincerest apologies for not providing you with the highest standard of hospitality on your recent visit.

I would be happy to discuss your experience with you in more detail. Kindly contact me directly at anderson.azevedo@sheraton.com so that we may arrange a time to speak.

I look forward to connecting with you.

Report response as inappropriateThank you. We appreciate your input.
This response is the subjective opinion of the management representative and not of TripAdvisor LLC
CBernardesTennis2018
Gorle, Italy
8959
Reviewed 25 February 2020 via mobile
Great Hotel Great Service Great View!!

Great hotel with a fantastic location. They have a great staff from the front desk to the restaurants and housekeepers. The view of Lablon and Ipanema are fantastic. Very good restaurants and great tipycal food served there.

The whole staff was great however, I can't say enough about the hospitality that Ramon from breakfast and the pool restaurant provided us during our stay.  My wife and I have been to many countries and stayed at many resorts, and we've never experienced a staff member willing to go out of their way to help us as much at Ramon did.  We had many requests and he went far beyond his job description to accommodate our needs.  When we come back to Rio we are staying at the Sheraton as long as Ramon is there.

Thank you so much for your outstanding review.

I am delighted to hear that above all it was the service you received that was most remarkable.

Your comments to our staff in special for Ramon are greatly appreciated and I am beyond thrilled to know you felt the level of service at our property truly elevated your trip experience.

We very much look forward to the opportunity to welcome you back at the Sheraton Grand Rio.