US$362
US$304
View deal
Free cancellation until 21/09/30
Hotels.comUS$347
Trip.comUS$311
HurbUS$362
View all 18 deals
* Prices are provided by our partners, and reflect average nightly room rates, including taxes and fees that are fixed, known to our partners, and due at time of booking. Please see our partners for more details.
jstnla
Milwaukee, Wisconsin, USA
22

We are wishing that we were back in Rio at the Emiliano as we are writing this review.

The hotel is gorgeous and the modern contemporary design was carefully throughout throughout the hotel. The service was very attentive and all the employees were very pleasant and went above and beyond in their service.

Our room was spacious and amazingly comfortable. We had an ocean facing view with gorgeous views of Copacabana and woke up to beautiful sunrises every morning. The bathrooms also with amazing rainfall showers and bathtub.

The food was also delicious and beautifully plated from the a la carte breakfast, to the poolside dishes and the dinner at Emile.

We were there during the pandemic and felt very safe and all the employees were abiding by the safety precautions.

When we were looking at hotels in Rio, we did not know whether to stay at Fasano or Emiliano. We ended up staying at both and split the times between the two. Let me just tell you, we much preferred the the service, the hotel/room and food at the Emiliano. Fasano was only good for people watching at the pool.More 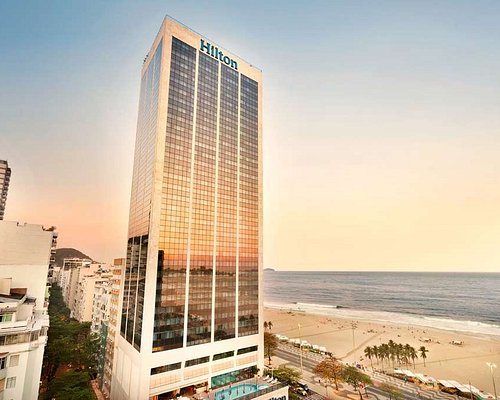 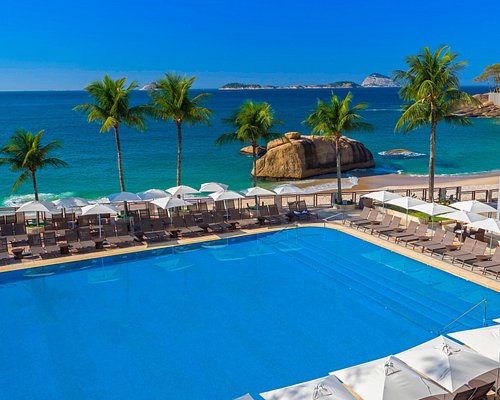 Expedia.com
View deal
Hotels.com
US$35
Agoda.com
US$25
Priceline
US$35
View all 16 deals from US$25
2 127 reviews
3.3 km from Emiliano Rio
We compared the lowest prices from 16 websites
Breakfast included
Petit Rio Hotel
US$31

Expedia.com
View deal
Free cancellation
Pay up to 12X
eDreams
Trip.com
US$29
Booking.com
US$36
View all 15 deals from US$29
1 527 reviews
8.0 km from Emiliano Rio
We compared the lowest prices from 15 websites
Breakfast included
Hotel Nacional Rio de Janeiro
US$120

Emiliano was supposed to be a nice hotel! The architeture is unique, the room
spotlessly clean, wonderful view of Copacabana Beach,but it turned to be a noghtmare!
Check in was ok, a female butler took as to
the room! Clarice explained how everything worked, even the fancy toilet seat! She failed not to give a call back to check if everything was ok!
I like to be warm when I sleep, and I happened to meet some housekeepers at the elevator hall and asked for a blanket! As they never brought, I had to make a call requesting one!
But the worst part of my 1 night stay was during the night! It was almost 4 am when a man forced the door trying to break into the room! I was so frightened! I screamed loud and could hear he saying : sorry, sorry!
I called front desk and I let an employee called Alves
know what has happened!
I could barely slept again! I was so scared!
Few Hours late I asked for a manager and the manager on duty was Camila! She told me that she checked the cameras and an employee was bringing room service and knocked in the wrong door! I used to stay in hotels several times a Year and never saw somebody forcing the door to deliver room service! My mistake: not had called the Police! Back to São Paulo I called the hotel and a manager called Thais told me that she was going to find out what had happened! By the end of the afternoon, somebody called Helena talked to apologize and invited me to a cup of coffee , which I declined!
I must say that I left the hotels a couple of times and never met a Security Guard! At the entrance there were just the bellboy and the doorman!
Rio is a beautiful City, with high levels of violence! It is such a pity that Emiliano hotel didnt care about my security!

This review is the subjective opinion of a Tripadvisor member and not of TripAdvisor LLC.
N_jasmine
London, United Kingdom
4866
Reviewed 28 August 2020 via mobile
Perfect

We visited this hotel last year in Rio and thought it was absolutely stunning, we had heard the hotel standards in brazil were not great but this was not the case for Emiliano! The staff were friendly and the rooms were to a very high standard. It is not cheap but you get what you pay for and breakfast was delicious. We were there during Brazilian Valentine’s Day and they decorated our room and this was the day after I was proposed although I don’t think they realised that was still lovely!

I would say it’s not very personal service there and I think people were very curious perhaps too curious about how we could afford to be there with some staff asking if my partner played football perhaps being of darker skin complexion and this upset us a little but I think this is something deep rooted in the country so we didn’t take it personally but as management you may want to work on that!

This review is the subjective opinion of a Tripadvisor member and not of TripAdvisor LLC.
Marcy O
Washington DC, District of Columbia
6845
Reviewed 19 April 2020
Lovely hotel, excellent location

My husband and I had a wonderful stay at this hotel. The rooms are large and comfortable, and the staff was very helpful and friendly. The hotel is right on the beach. There's a beautiful pool and bar on the roof. Highly recommended!

This review is the subjective opinion of a Tripadvisor member and not of TripAdvisor LLC.
Kingpaul100
Malaga, Spain
58703040
Reviewed 18 March 2020 via mobile
The Boutique 'shutter' hotel

Indeed the boutique ' shutter' hotel. I say this because of the unique design. Each of the beach facing rooms has a unique shutter system to give more privacy and optional shade. - alternatively, with floor to ceiling windows you can also lay in bed and get great views of Copacabana Beach. Very attractive hotel externally. Bedroom light and bright and decent size. Comfortably appointed. Great location. Terrace and pool at rooftop but rather disappointing - lack of space and infinity pool like swimming in a narrow canal ! It is a very stylish hotel. Great service levels in all areas, BUT, this all comes at a price and I do tend to find the Copacabana Palace is more suitable to my needs. Certainly at these prices.

This review is the subjective opinion of a Tripadvisor member and not of TripAdvisor LLC.
MJL395
New York City, New York
3452
Reviewed 17 February 2020 via mobile
Wow

I stayed at this hotel twice in two months as my return trip to Brazil I couldn’t resist coming back. Wow. This is a true 5 star hotel, the rooms, food, service and location all top notch.

Check in: Gabriela was fantastic at the check in desk. With nice sparking water in hand she went they the amenities at the hotel and my stay and room. Due to flight from the states I arrived both times prior to 8am which is ahead of check out time obviously. The first trip I was provided a room right away and the second trip I waited until around noon. If your room is not ready they have showers in the spa/gym floor to wash up and change. Also had large lockers there to store bags and clothing to get on with your day until the room is ready.

The food: Wow. The daily breakfast was fantastic and the service was top notch. Great service I had from Patricia and Ono (might not be correct spelling). I also ate lunch numerous time on the rooftop by the pool. All enjoyable meals with great food and service.

The Room: If possible I would book and ocean front room. I mean wow. What a view and true balcony where you can sit and relax with 2 chairs and a small table. Hotel room
Is top notch. Beautiful wood floors, stone countertops shower and a huge tub. Lighting was very very simple with master switches and everything Labeled.

Pool: Another wow. The rooftop pool along with restaurant have some of the best views ever. Service again was top notch.

Service overall was fantastic. There were times I asked for help on locating a gift for someone and they offer to send a bell hop to go and buy it. I said wow. Yes please. Also they had cigars in the menu at the pool and didn’t not have one in stock and sent a bell hop to get me the cigar i wanted. Had to goto 3 different location to get it but an hour later as I was in the pool the cigar was delivered. That is top notch service and in a top notch hotel. I cannot wait to come back again and advised anyone I know coming to Rio this is it.