“Nice place to stay!”
RURFXzFfMTVO
other traveller has booked this property 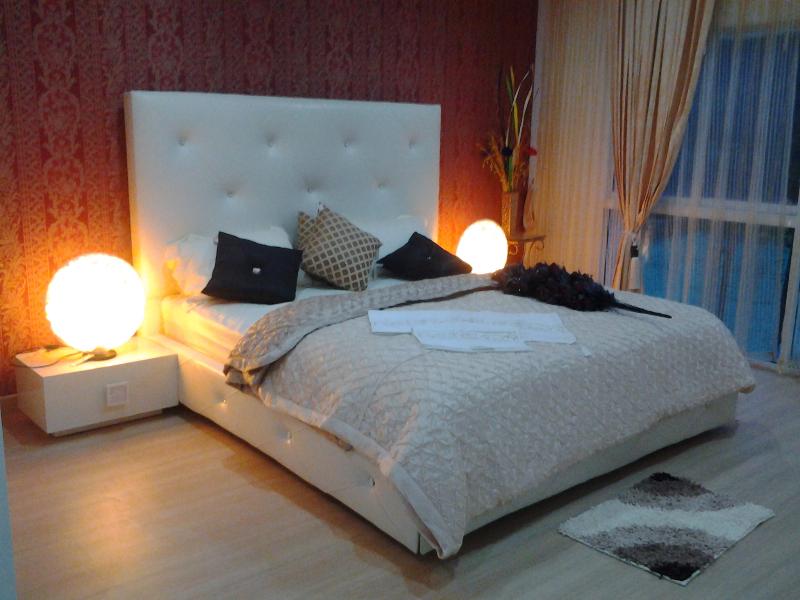 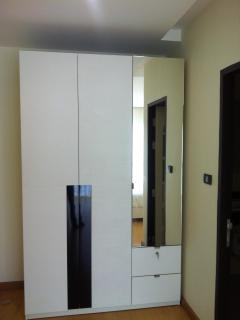 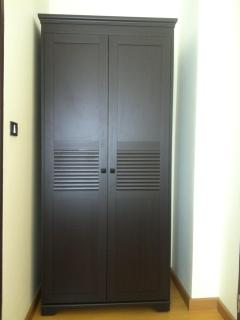 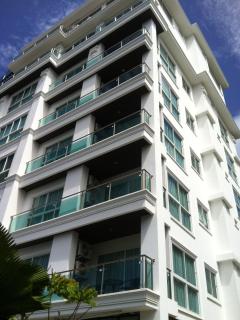 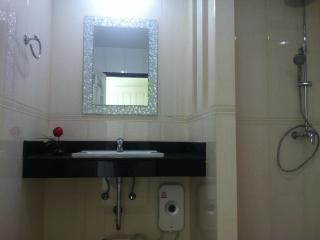 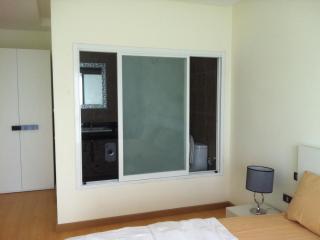 Very good - based on 8 reviews
Write a Review

First of all, the poorly paid and disrespected staff, were excellent, (with exclusion to the night shift guy), their attitude and warmth made our stay. Too bad that they have to work for Vinod Handa...

We had met Katarina (previous review), in passing during stay, and she seemed very nice. However our experience in the 2 brm apartment was much different to her stay in the 1 brm apartment.

On arrival, my friend and I were too tired to do anything and went to bed shortly after our arrival.

As the complex has not been completed yet, the 2brm rooms are on the road side and are bombarded by constant traffic noise and dogs barking, ALL NIGHT LONG.

The bed reminded me of a time I had to sleep on a concrete floor!
The mattress was oversized for the bed frame, and clearly a cheap product.
By the end of the ten days, my hip was sore, and my friends back was unaligned.
Both beds in the apartment were the same.

On waking in the morning, I went to shower, only to notice there was no hot water. In the mean time the entire bathroom floor flooded as the tiles have not been lain properly.
Feeling dirty and uncomfortable, I went to reception (there are no in room phones as would be required of a 3 star or higher), when my travelling friend said there was only one key (FOR A 2brm...)

Arrive in reception and was meet by the night shift employee who was as helpful as a bottomless bucket.

Had to wait until 10am before management staff arrived, to which I was told, "If I dont speak nicely, nothing would be done", even before I had a chance to explain our concerns.
After an hour and three various employees in and out of our room, and the water heater was turned on, by the time they left, the water turned off again after 2mins!!!!
I went down stairs again, dripping wet as the towels were all used the stop the floor flood by staff. Again I was greeted with rude defence from the manager Vinod Handa.

The water was never fixed, and I became reluctant to use the shower as it has such low water pressure, and COLD, so went to the beach instead. Something more familiar with backpacker lodges as opposed to the falsely, self awarded 4 star status as advertised.

Believe me, in the last year I have travelled to 20 countries, stayed in over 30 hotels of various standards, (from the Ritz Carlton, to Chateau de Bangkok, ocean front villas in Vanuatu and Bali, hotels in Prague and Oslo, homestays in Switzerland, and many many more...) and this has been the ABSOLUTE WORST!!!!

There is no way this place could achieve 2 stars by international standards(or anyones), let alone the ridiculously self appointed 4 stars!!!!

It didn't finish there...

We were told that we could ask reception to phone call local restaurants to order food;
We did.Requested an Italian pizza from Pizza Co (great place in Patong), clear written instructions with ingredients written, large, etc, a monkey could understand...

You wouldn't believe what happened!

Mr Vinod Handa, (the con artist manager), decided to have his wife make a pizza in his own apartment and charge us the same cost as the pizza we ordered from Pizza Co.
Might have been fine, but it was more a naan bread than pizza. It had no tomato pizza sauce on the base, it only had some sliced sausage and cheese on a dough no bigger than 8 inches!!!!

The place clearly claims to have airport transfers, but I think that is only the case when collecting you, which is in their need. When it came time to leave, and make it to the airport to meet a time essential flight (like most...), Vinod Handa refused to get the employed driver to take us to the airport, (even though we had made the request days earlier).
Instead, Vinod Handa ordered a taxi which was 30 minutes late, the driver was rude, slow, and still charged us another 5000baht!!! Its meant to be part of the package!!!!

The airconditioner in the lounge room failed on the 4th day, (no repair)
mainly due to the poor installation (new machine), as is apparent throughout the complex...

The bathroom has no air extraction/ventilation, and the toilet is in the same room,
so the bad aromas would never leave, even with all windows and doors open!
The tiny drain in the bathroom (that floods etc), is half blocked with what could only be described as evil rotting filth that permeates an aroma similar to the devil's den itself.
We bought our own air freshener to tolerate the insult on our senses.

The glass balustrade on the balconies still has construction/manufacturing writing on it, and the cork spacers that is used in construction are still stuck to the glass.
Proving that cleaning, and attention to any kind of detail, is irrelevant.
Just another indication that this place is established for one reason only, to provide Vinod Hada with a healthy retirement and no consideration for the guest and fair deal.

The kitchen, as advertised was meant to be complete, yet there were no items of cutlery, only a spatula!!!
Not even any tea spoons... four cups and saucers, but thats it.
A fry pan, but no dinner plates.
I used the stove top once, but the smell of burning plastic was so off putting that it contaminated the eggs I was cooking. Threw them away...

The microwave is jammed in the corner, on the side of the sink, half hanging of the side of the counter. If you wanted to use it, you have to pull it out and balance it carefully while in use...

There are many more, but just writing this is making me depressed, like having to relive it again...

Date of stay: December 2013
Liked best: Friendly day time staff
Liked least: 90% of the whole experience
Travelling group: Friends
Your age range 35-49
Would you recommend this hotel to a friend?   No.
Was this review helpful? Yes
This review is the subjective opinion of a Tripadvisor member and not of TripAdvisor LLC.
Problem with this review? Thank you. We appreciate your input.

My boyfriend and I stayed in this apt for 3 weeks.
Condo is situated in a small hill, so there was a lovely view on the whole Patong from our apt!
The rooms are very spacious, very beautiful furnished, like best 5 star hotels :)
There is a kitchen with everything you need for cooking. The bedroom has a very comfortable bed.
There was an everyday cleaning, change of towels and bath stuff.
Also if any problem occured, everybody did his best to solve your problem.
The only thing, that could be better - bathroom. Sometimes during our stay the water pressure was not good enough, but it usually improved in few minutes. Also the temperature of the water was always warm, but never hot.

Date of stay: December 2013
Travelling group: Spouse/Partner
Would you recommend this hotel to a friend?   Yes.
Recommended for:
Was this review helpful? Yes
This review is the subjective opinion of a Tripadvisor member and not of TripAdvisor LLC.
Problem with this review? Thank you. We appreciate your input.
Previous Next
1 2 3
Updating list...
Do you own a holiday rental? List it here.

Looking for a place to stay in Patong?
View all 356 holiday rentals