You cannot be a luxury hotel when your... - Beatrice Hotel

US$180
US$148
View deal
TravelocityUS$180
CheapTicketsUS$180
Orbitz.comUS$180
View all 11 deals
* Prices are provided by our partners, and reflect average nightly room rates, including taxes and fees that are fixed, known to our partners, and due at time of booking. Please see our partners for more details.
Cosmopolitan41327
31

You cannot be a luxury hotel when your staff is rude

I am a native Congolese who is back home after 35 years. Suffice to say that I planned for this trip for a long time. My family is staying at the hotel for 11 days. This is not cheap at all in addition to multiple dinners at the restaurant. For the most part, we have been treated very well by front desk staff and the porter and security. The restaurant staff though is unbelievably rude. For a high end hotel, there should either be multi-lingual staff or staff that is patient with non French speakers. They also act like you are about to rob them and not pay a bill, hovering over you even though they know you are staying at the hotel. In addition to the fact that housekeeping inexplicably threw out my expensive dental retainer. Upon arrival, I had been impressed. With each day interacting with rude staff, having some building project or other taking place, unable to use the pool due to the bugs, that first impression has changed. I hope not to take another 35 years to be back home and will spend my time where I am treated as a proper guest and that is NOT the Beatrice HotelMore

Hello Valued Customer, Thank you for your staying with us and for sharing your experience with other travelers regarding your stay! I am extremy sorry that you had the unfortunate experience with our staff and with our services. This is highly unacceptable, I have launched an investigation and will contact you shortly. Our hotel aims to provide a truly unique experience and once again apologize for the unfortunate situation. Thank you for staying at Beatrice Hotel and we hope that you will consider us for your next business trip! Sincerely .

Report response as inappropriateThank you. We appreciate your input.
This response is the subjective opinion of the management representative and not of TripAdvisor LLC
See all 38 reviews
Nearby Hotels 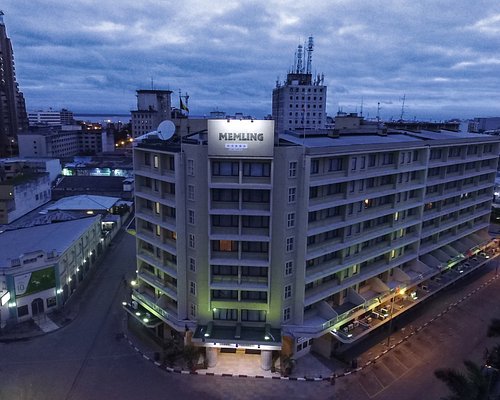 Expedia.com
View deal
Free cancellation
Pay up to 12X
Hotels.com
US$237
Travelocity
US$237
Trip.com
US$404
View all 13 deals from US$237
214 reviews
We compared the lowest prices from 13 websites Expedia.com
View deal
Free cancellation
Pay up to 12X
Hotels.com
US$237
Travelocity
US$237
Trip.com
US$404
View all 13 deals from US$237
214 reviews
0.8 km from Beatrice Hotel
We compared the lowest prices from 13 websites
Breakfast included
Hotel Selton
US$177
US$160

Was in Kinshasa for a week. I chose Beatrice Hotel for its location and reputation. The biggest breakfast ever to set you for the day. Staff have been told to greet customers and they just do it without meaning it. The supervisor must check the work that the cleaners are doing as sometimes they
just want to tick boxes. My huge and massive issue is the fact that there is only one half mirror in the room and it is in the bathroom with no mirror light. I had to attend 3 parties while in Kinshasa and I did struggle while applying my make up. After I get dressed I could not check myself and had to go and use the mirror in the lift. Put more mirrors please. If the cleaners are not well supervised, this hotel will go down to one star in 5 years time. Also please fix the damp on your walls, it does not make the place look fresh. The AC was sometimes blowing stinky air which did not make the room smell fresh when we return. Good Wifii though. All in all I would say average stay for the price we paid. Would not be my first choice again.

This review is the subjective opinion of a TripAdvisor member and not of TripAdvisor LLC
Acrawls
Washington DC, District of Columbia
439
Reviewed 10 April 2018
disappointing fitness facilities; good WiFi

I elected to stay at the Beatrice while in town for a workshop, based in part on the TripAdvisor inclusion of "fitness center" in the hotel amenities. This is a generous description - these facilities are quite poor for a hotel in this price range. Particularly disappointed that there is not even a treadmill, basically just a couple of weight lifting benches, a rowing machine, and an old bike. The other option for exercise - the pool - requires a walk across the parking lot, and apparently a heads-up-in-advance to the front desk so that it will be cleaned. Would be nice to have a kettle in the room to boil water for drinking (vastly preferable to purchasing all of those disposable bottles). Bright spots are the WiFi, which works well throughout the hotel, and the hotel staff, who are helpful and friendly. Otherwise, the food was fine, room is clean, but that is a low bar.

Dear Amanda, First, I want to thank you for your feedback. While I wish, you had a better experience, it is with feedback like this that we learn from and use to improve. We are currently building another gymn with all the latest equipment and this gymn was a temporary gymn.The swimming pool is cleaned on a daily basis but at times the chlorine takes a day for the pool to be available. We work hard to deliver an exceptional guest experience, and it’s apparent in this case, we fell short. If you give us a chance to earn back your trust. I would be happy to make your reservation personally and and see to it that you enjoy the experience that so many of our guests have grown so fond of.

Report response as inappropriateThank you. We appreciate your input.
This response is the subjective opinion of the management representative and not of TripAdvisor LLC
Eryk932
Koscielisko, Poland
6414
Reviewed 27 August 2017
Very good alternative to better known international chains of business hotels

I was there 2 nights during my business trips. Majority of ‘business’ people at the airport took Pullmann or Kempinski but I took a cheaper Beatrice Hotel (average price per night 150-180 USD). And I don’t regret. Airport transfer cost 50 USD and it is approx. 30-45 min drive. Rooms are spacious and clean, restaurant is good, when there is a power shortage they have own power aggregates. It is located to a very nice lively place (sometimes I just was looking at it through the window – there were always many people and something was happening) and close to a railway station (there are only 2 local trains there – 1 in the morning and 1 in the evening). If you want late check-out or very late check-out then you can negotiate the price (reception just needs to get approval for duty supervisor). Overall it was a good experience and it is a good hotel.

Thank you very much for taking the time to write this outstanding review on your recent stay at BEATRICE HOTEL.

We are delighted to read that you enjoyed your stay with us.
The recognition of our guests is the best reward we could get. I will share your praises with the entire team who will be thrilled to hear your kind words!

We are looking forward to welcome you back in The
BEATRICE HOTEL,

Report response as inappropriateThank you. We appreciate your input.
This response is the subjective opinion of the management representative and not of TripAdvisor LLC
Toutou54
London, United Kingdom
2727
Reviewed 23 December 2016
Average hotel with huge potentiel

The Beatrice Hotel is set at the top of Kinshasa's largest avenue, the Avenue du 30 Juin, close to all the amenities the Congolese capital has to offer and a stone throw away from the Central railway station.
The establishment doesn't look like much from the outside, while the inside doesn't look like much either...Rather pompous and burlesque decor and in some places, like the waiting room close to the reception, outright ludicrous..
I can't say much about the rooms, rather friendly, spacious and clean, but otherwise the hotel seems to've been built in haste or designed by a drunken architect. No toilets in the lobby, none in the vast restaurant-cum function room. In emergency, you need to go outside, round the swimming pool or skew around tables close to reception, open a somewhat hidden door and climb a flight of stairs to a set of bathrooms on the first floor giving onto another massive function room.
I have had antipodal experiences with service: I had to wait almost two hours once for lunch to be served and it finally arrived half burned and crisp.! On the other hand, some members of the staff leave no stone unturned to satisfy your every whim and the food on average is exceptionally good, despite a bit on the pricey side, but then again, we're talking about Kinshasa where everything is blown out of proportions.
Shame though about the tables set up as you end up eating in some sort of corridor between the hotel lobby and the restaurant per se when the latter is being used for functions, which is often the case.
The hotel's strength is its general manager, a relatively young guy with infinite resources. He is truly amazing, a real bionic man, almost everywhere at the same time, like a guy moving about in a fast forward movie. Before you even think of uttering a complaint, he's miraculously by side, finding a solution, suggesting an alternative and easing away any grief you may have.
I am of the opinion that this manager and some members of his staff have pulled this rather nonentity resort up to a much higher level of hotel hospitality.

Let us take the opportunity to thank you for posting your comments on TripAdvisor.
We really appreciate your feedback and we will take every single word in consideration.
All the staff are working for the confort of our guests.
Hope we will welcome you back in the nearest future with several changes.

Thank you again for your confidence and the lovely compliment.

Report response as inappropriateThank you. We appreciate your input.
This response is the subjective opinion of the management representative and not of TripAdvisor LLC
TroisChatsLies
Kinshasa, Democratic Republic of the Congo
636224
Reviewed 30 October 2016
Nice outdoor patio with pool

I attended a graduation party on the patio around the pool. Lovely location. Servers came around with drinks and appetizers, which were really tasty. Nice location for parties and events. It's true that there seemed to be a lack of parking, however, the parking lot is very small.

Thank you for the great review of our hotel! We are glad that you enjoyed your Visit and hope to see you again very soon.