“Fantastic anniversary getaway!”
QklaXzE5X2txMA==
other travellers have booked this property 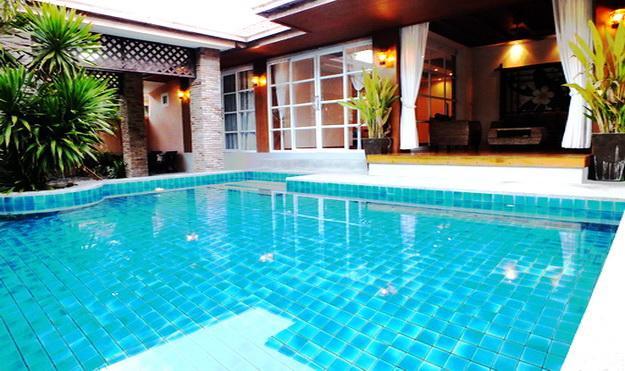 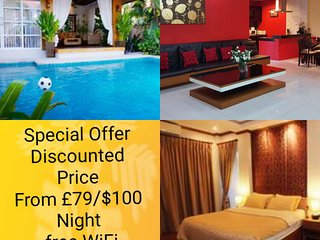 Very good - based on 16 reviews
Write a Review

Philippines but now staying in bangkok
Reviewed 18 April 2014 for a stay in March 2014
Date of stay: March 2014
Would I recommend this holiday rental to my best friend?
Recommended for:
Was this review helpful? Yes
This review is the subjective opinion of an individual traveller and not of TripAdvisor LLC nor of its partners.
Thank you for the Nice Review. Even though you had such a large group 9 adults and child our villa was more than large enough to accommodate your group as you have nicely mentioned in your review. Please come back and stay longer next time and i will make sure we offer you our best discounted prices for that period. Regards Brian & Staff.
This response is the subjective opinion of the management representative and not of TripAdvisor LLC nor of its partners.
Problem with this review? Thank you. We appreciate your input.

Bangkok
Reviewed 7 December 2013 for a stay in November 2013
Date of stay: November 2013
Would I recommend this holiday rental to my best friend?
Was this review helpful? Yes
This review is the subjective opinion of an individual traveller and not of TripAdvisor LLC nor of its partners.
Thank you for the Review i am always just an email or telephone call away to answer any questions regarding my villa or local area. Our staff have worked with us for along time and understand what our guests require whilst staying at our villa, this in return gives our guests a much better holiday/vacation experience. Thank you again Brian & Staff
This response is the subjective opinion of the management representative and not of TripAdvisor LLC nor of its partners.
Problem with this review? Thank you. We appreciate your input.

When we arrived the person to contact us for tride to Villa was not in the place that was stated on the instructions so we stood there for almost 2 hours.Finally found the lady standing in between exits with my nametaped sideways in between bar. 24 hours after arriving someone broke out and crawled through a 12by12 space in the bedroom window(We left at 1am-5am= we were being watched) and took every we had_laptop_watches_tablet_medication the list goes on. Even sat down to eat our food !!!. All this time from landing to being robbed no one from management would answer their phone ! During cleaning the the door were constantly opened so we spent most nights killing and being bitten by bugs and on the last day the manager arrives and was seriously going to charge up for electricity which makes no sense since 2 of my party decided to stay elsewhere !!!! It really sucked and ruined everything !

Date of stay: November 2013
Travelling group: Friends
Your age range 35-49
Would you recommend this hotel to a friend?   No.
Was this review helpful? Yes
This review is the subjective opinion of a TripAdvisor member and not of TripAdvisor LLC
Dear renter you failed to mention that your flight was almost 2 hours late on arriving! this certainly made a bit of confusion with the driver. If my driver was not at the airport at all for your pickup then i would be concerned! but this was not the case as you have mentioned and the driver had been waiting for you all the time. I think when you are writing to say the driver had your name spelt wrong and side ways on a sign, it indicates to me what type of person we are dealing with!!

You were a group of single men when you checked in to the villa. My manager and myself explained to you and to all single male groups of guests when checking in to the villa, that we cannot accept any responsibility if you bring back (Guests/Bar Girls!!!!) to the villa. This was the case in your unfortunate situation!! 1 set of keys had went missing 24 hours after you checked in to the villa? the police came and ruled out a break in at the villa and would not give you a police report for the theft as they established that your (Guests/Bar Girls!!) had stolen 1 set of keys and came back when you were not home and done this. Our village has private security and they did not let any other person in the village on this particular night apart from (Female Guest/Bar Girl!!) as they had no reason not to allow her in the village? as she was with your group the night before!!! this was shown on the main village entrance camera to the police. You were angry as you insisted on getting a Police Report for INSURANCE PURPOSES!! the police refused you this as they established that there was no Break In at the villa.

Please note we have never had any problems at our villa, and all my other Reviews for my property are very good and honest! but time to time we get very difficult guests!!! This is the case in this situation!!
This response is the subjective opinion of the management representative and not of TripAdvisor LLC
Problem with this review? Thank you. We appreciate your input.

Looking for a place to stay in Pattaya?
View all 1 084 holiday rentals