Staff at Ramon's is great, S&B's was... - Ramon's Village Resort

My room at S&B's was dirty. Stains on the walls. Hair on the blow dryer for a week - not mine. Didn't clean up well daily. Erratic coffee supply.
Outdoor areas were trashed by guests. Ramon's was much better taken care of and the staff is the friendliest anywhere.

Dive operation was good but my computer logged me out for 48 hours on my 2nd day after a 90' dive, an overnight, then 85', then on the subsequent 75' dive. All dives with slow ascents and safety stops, but long bottom times.

See all 1 756 reviews
Nearby Hotels 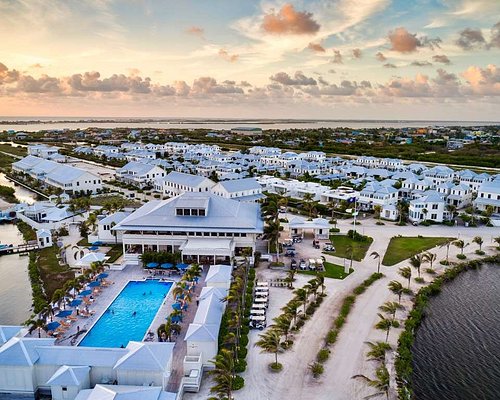 Taking safety measures
We compared the lowest prices from 4 websites

Taking safety measures
We compared the lowest prices from 15 websites
Las Terrazas Resort
US$332
US$292
Tripadvisor
View deal
Pay up to 12X
Travelocity
Hotels.com
Preferred Hotels
US$332
View all 15 deals from US$292
1 077 reviews
6.7 km from Ramon's Village Resort

Taking safety measures
We compared the lowest prices from 15 websites
SunBreeze Hotel
US$192
Tripadvisor
View deal
Pay up to 12X
Travelocity
Expedia.com
US$192
Orbitz.com
View all 14 deals from US$192
1 397 reviews
0.2 km from Ramon's Village Resort

Spent last week diving at this bit of paradise. Mr. Rick manages a great, safety conscious, confident inspiring team. If I tried to mention all these great folks by name I'd miss someone. I enjoyed three different boat crews, 4 different dive guides and team members. Dives were adapted to meet the late season weather, and I had wonderful sensory overload from all the fantastic diving. Had two day trips, GBH and Turneffe; of course the diving was fantastic. A favorite highlite of these trips was the boat ride itself. I'll never be in the yacht set, but dashing through the waves on Lady Grace and Miss Nina is high seas adventure at it's peak. High praise to Mr. Einer for matching the shoreside team to the excellence of the diving experience. The dining featured a new gourmet specialty each evening. The housekeeping and groundskeeping were impecable. I failed miserably in calling these friendly folks by name but they never forgot. Kudos, thanks, and warm wishes to you all, I came away much refreshed.

This review is the subjective opinion of a Tripadvisor member and not of TripAdvisor LLC.
AnneEdwards
222
Reviewed 18 May 2021
Always great

4th time staying here and I'm never disappointed. It's amazing how hard the front desk workers Josh and Jose work at trying to know every guest. They make such a great first impression that continues throughout your stay. The manager is there from sun up from sun down overseeing every single detail. Truly impressive. We always enjoy the wait staff - especially Jack and Christian. The rooms are beautiful and kept up to a high standard. We were here when the sea grass was at its worst and they busted their butts every morning to get it cleared off. We looked at other resorts up and down the beach then laughed and wondered why we'd ever stay anywhere than this beautiful place. Until next year...

Room tip: There is not a bad room at this resort.
Ask AnneEdwards about Ramon's Village Resort
1  Thank AnneEdwards

This review is the subjective opinion of a Tripadvisor member and not of TripAdvisor LLC.
Marvis M
Saint Louis, Missouri
296
Reviewed 10 May 2021
The people make this place

Ramon's is a beautiful property located on a gorgeous beach. The staff are absolutely outstanding and make you feel instantly welcome and truly liked, not just smiled at because they're told to.

Pros: The staff, the food (good and well-priced), the service, the location, our room was great, the dive operation was absolutely top-notch with great boats and fabulous guides.

Not so Pro: No bar. They sell wine and beer but nothing else. The manager told us why they made this decision - thanks drunken, unruly and destructive tourists. Alcohol on the island is extremely expensive so if you must have hard booze, buy it at the tariff-free shops.

Con: The diving. No fault of the resort but the dive sites are degrading just like they are all over the Caribbean. Very few small fish however, if you enjoy swimming with nurse sharks you'll be thrilled. (Not dangerous!) Turtles on almost every dive and dolphins on one.

This review is the subjective opinion of a Tripadvisor member and not of TripAdvisor LLC.
SoloTravelisFun
2
Reviewed 9 May 2021
"My bipolar trip to Ramon's"

The dive shop was the best I've ever used! Top notch! Andy was my dive master for most of the week and he could not have been nicer and more accommodating all while looking our for our safety. He helped me figure out my new dive computer, patiently answered all my questions, handed me all my things that I kept losing - sigh-, and saved me from an overly friendly turtle even if I didn't know I needed saving. LOL. Rick, the manager and all of his staff were terrific and worked so hard. I don't think I've ever seen anyone work so hard as Johnathon on the boat pulling 5 divers up from incredibly rough water. The water was rough all week but we had a skilled captain at the helm in Elmer. All the crew including Guillermo and- I feel so badly that I didn't get the name of another crew member that was with us as well--- just EVERYONE!!!! I did end up on full day dive that was not at all what I wanted but I had only myself to blame. I wanted to get on a boat with some friends I met figuring they were doing the same as the boat I was supposed to be on and, of course, they accommodated me at the last minute (they are that good). Just a fluke.

The resort property was lovely as was the staff; especially in the restaurant. I did, however, battle cockroaches in my room the entire week. I understand that I was on an island and they thrive there but that doesn't mean it's okay to sleep with them. I haven't seen one in many years and never in my hotel rooms. It just so happens that they are one of my biggest fears. I'm horrified by them and didn't sleep very much always looking around. The staff including Mr. Einer tried to help but I believe my room wasn't properly sealed because on my last night I was moved to another room with a different roof structure and I didn't find one cockroach. One night I found them in my cosmetics bag and luggage. Security came to kill one and then more appeared. Alan on the overnight shift search high and low and couldn't find the others. So, it was decided that he would do a full spray in the room. I didn't think it through that the room wouldn't be aired out properly in enough time for a few hours of sleep. Alan was so kind and such a gentleman....he sat outside with me for 1.5 hours and we had such a nice chat about life, the world, culture and more which calmed me down -- I was truly terrified! But then, I had to go to sleep and spent the night inhaling bug spray and sleeping in a bug spray bed and I can still smell it after a week at home. The front desk was kind enough to set aside another room for me to move into if need be but Alan - only wanting to make things right form me had sprayed that room too. I wish I would have thought to bring a blanket out to the pool and sleep on one of those comfy loungers. Had a day with no sightings and then they were back. By that time I had my own can of bug spray. I have never been so emotionally and physically exhausted on a vacation. It was the kind of thing that would be made better at the bar.....but the resort does not have a bar! Beer and wine only. I've never been to a resort without a bar - wow.

This review is the subjective opinion of a Tripadvisor member and not of TripAdvisor LLC.
snortn
Santa Fe, New Mexico
3
Reviewed 29 April 2021 via mobile
Great Diving Resort

Had a great stay at Ramon’s, our first time there. The entire staff could not be friendlier, or more interested in making your stay as nice as possible. Josh at the front desk, Rick, the Dive shop manager, and Christian in Pineapples were way better than great, and there were more!
Beautiful grounds, a big room, and great scuba diving...what more could you ask for? A true vacation from poor service and uncaring staff. This is how a resort should be. We will go back.

This review is the subjective opinion of a Tripadvisor member and not of TripAdvisor LLC.
View more reviews
PreviousNext
1…345…