Hotel Rural Cal Torner
Hotel Rural Cal Torner
Lowest prices for your stay
Lock in the lowest price from these sites
US$142
Free cancellation until 21/09/18
Reserve now, pay at stay
View deal
TripadvisorUS$141
Priceline
eDreamsUS$142
Agoda.comUS$141
ZenHotels.com
StayForLong
* Prices are provided by our partners, and reflect average nightly room rates, including taxes and fees that are fixed, known to our partners, and due at time of booking. Please see our partners for more details.
quehohaveuvist
Ulla, Spain
182

In a really small village you can sleep in a very good hotel. The price is not cheap, but you will pay the real value.
The room was really comfortable and big, (sobirà) with a hidromassage tub in the room, perfect after a long day riding motorcicle (or walking) in the Priorat.
The room had a big sofa, two televisors (we don't know if it works or not) and a bathroom with shower. A/C with RC in the room, and everything was really clean and nice. We found sleepers and bathrobes and towels enough.
It does not have refrigerator in the room, but you can ask to the owners for everything you want.
The negative point it was the restaurant service, on sundays they don't serve food for dinner. A little annoying in an hotel, because we was really tired.
The breakfast is great, with toast, fresh orange juice, and a buffet of cheese, different kinds of meat and sweets, croissants, coffee, tea...
We recomend that place a lot if you plan to not eat in the hotel for dinner.More

Show less
Trip type: Travelled as a couple
See all 126 reviews
Nearby Hotels 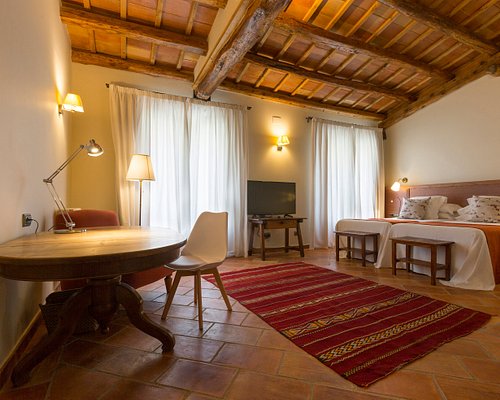 Hotel Hostal Sport
US$115
US$113
Tripadvisor
View deal
Free cancellation
Pay up to 12X
Booking.com
Orbitz.com
FindHotel
US$115
View all 15 deals from US$112
275 reviews
7.4 km from Hotel Rural Cal Torner
We compared the lowest prices from 15 websites 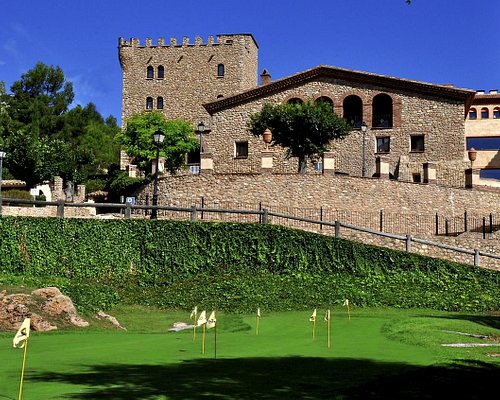 La Figuerola Hotel & Restaurant
US$65
Booking.com
View deal
Expedia.com
US$67
Destinia.com
US$58
travelup.com
US$94
View all 13 deals from US$58
8 reviews
9.5 km from Hotel Rural Cal Torner
We compared the lowest prices from 13 websites 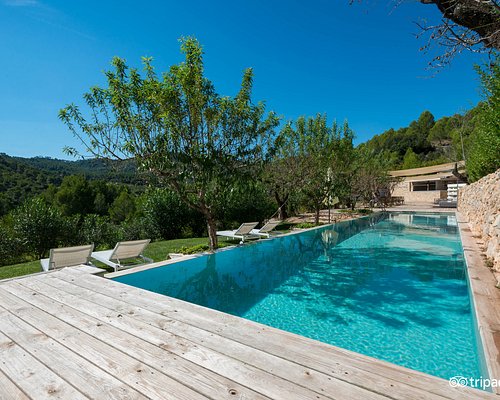 As a first visit to this wine region, the bar has been raised. Beautiful terraine, friendly people, great food and amazing wine! This hotel is a true gem in the region! Antonia & Jordi could not have been more welcoming, Her cooking, and Jordi's wine selection is a true reflection of the region. The hotel was perfect! We loved the peacefulness of the town, which was enhanced by the chiming of the church bells! This couple and their attention to detail are true ambassadors of the Priorat! We can't wait to return!

This review is the subjective opinion of a Tripadvisor member and not of TripAdvisor LLC.
GarryGodfrey
Nassau, New Providence Island
127
Reviewed 23 May 2016 via mobile
An Oasis of kindness and civilisation

Often we book trips to visit friends or family in far flung places, and we apprehensively select a hotel on the Internet. Rarely are we as pleasantly surprised as Rural Cal Torner. George and Antonia renovated this delightful friendly and stylishly simple hotel over four years. They are genuinely lovely people who are truly interested that you enjoy your stay. It really feels like you are staying with very good friends. The building is right in the centre of this small town and yet manages to remain calm and quiet. Antonia cooks lovely local fresh food and George amuses and entertains with his attentive and kind service. There is a good wine selection representative of the region and George is very helpful with suggestions.

We thoroughly enjoyed our stay and leave very much more relaxed.

This review is the subjective opinion of a Tripadvisor member and not of TripAdvisor LLC.
deymal
Canmore, Canada
235
Reviewed 28 April 2016
My Favourite Hotel ever.

My boyfriend and I stayed here a couple of years ago now but I still look at it as my favourite hotel I have ever been to. The place has so much character, the hosts were lovely and the food and wine was delicious. I couldn't of asked for anything more.

This review is the subjective opinion of a Tripadvisor member and not of TripAdvisor LLC.
Pricetta
London, United Kingdom
9166
Reviewed 1 June 2015 via mobile
Almost perfect...

Before you read on, I want to give you an overall review which is great. It's a beautiful retreat and finished in all areas to very high standards.

However, before I pontificate about how wonderful our stay was for the most part (and to make sure you read the nitty gritty without tiring too early on the good stuff!), there were a few things that were a little.... Shall we say... Off.

Nombre uno. Now although the hotel CLEARLY states that check in is from 4pm, my husband and I were touring Spain on our motorbikes, and planning or evening estimating an arrival time is pretty impossible. We are seasoned tourers and to this day we've never arrived somewhere on time.

So we arrived at 3pm. In the absolute blistering heat of the day. In full bike gear. I must say at this point we were fully aware we were very early, but hotels at the very minimum will store your luggage and allow you access to the facilities, if not your room if it is ready. Well, when we arrived the owner promptly told us we were early, that they were eating and that we would just have to go away and come back. To say we were gobsmacked would be an understatement. So off we trekked in full bike hear through the town to find somewhere that might offer us water at least!

We did find an amazing bar overlooking a phenomenal lake and quaffed a lot of water and a beer. And decided to make it our mission to find a way down to the lake once we'd checked in.

So back to the hotel after 4pm and all was open. Hoorah. And WOW - this place is beautiful. Rustic in design but very modern and finished to the highest standards. We checked in and sticking to plan threw on some swimmers and shorts and attempted to find the lake. No such luck!!! We got chased away by the vineyard farmers at the mere taste of getting close to the water, so defeated we turned back.

After an amazing shower and spruce for dinner we wandered downstairs and enquires about a drink. Well! As its a vineyard hotel, we had a mere 555 wines to choose from. So we sat with the TV, some local olives and some beautiful Vino blanco.

And again, we are very aware that here was a 'lost in translation moment', but we enquired about when they serve dinner and although we were a little shocked that they serve so late (9pm - 10pm) we nodded in agreement and settled in for a bit of a wait. At 8.30pm we asked what was on the menu. We were told that we had to have agreed our choices by 7pm to be able to sit for dinner! Waaaaah what a fail! Fortunately we were still allowed to order and dine, otherwise who knows where we'd have eaten!

Dinner itself was ok. We had a simple but nice enough salad for starter and a bit of an odd tasting meatball type dish for main. Pudding was traditional but very yum - natural yogurt with local honey and goats cheese with quince.

After the previous mishap, our second dinner was much easier, and today the food was fab. Beautiful avocado, tomato and langoustine starter and the most melt in the mouth cow cheek for main.

And if I didn't praise it enough before, every wine we had was just spectacular and literally half the price you pay in the UK!

So to recap, a fabulous hotel with some oddities that raised an eyebrow. So as per the title... Almost perfect.

But you must try it!

This review is the subjective opinion of a Tripadvisor member and not of TripAdvisor LLC.
Harri S
Kirkkonummi, Finland
128
Reviewed 17 April 2015
Friendly and homey hotel

We selected this hotel based on recommendations in TripAdvisor. We were not disappointed. The stay in hotel was really nice experience. In addition to the service, the room was of excellent quality. If all hotels were like Cal Torner travelling would be enjoyable and stressless.

Ask Antonia and Jordi for recommendation for winery visit.

This review is the subjective opinion of a Tripadvisor member and not of TripAdvisor LLC.
View more reviews
PreviousNext
123…
<script type='text/javascript' crossorigin='anonymous' async onerror='__scriptLoadError(this,true);' src='https://static.tacdn.com/a