Hotel Suisse
Lowest prices for your stay
Lock in the lowest price from these sites
US$181
Reserve now, pay at stay
View deal
Expedia.comUS$181
Hotels.comUS$181
CheapTicketsUS$181
TravelocityUS$181
eDreamsUS$181
Orbitz.comUS$181
View all 12 deals
* Prices are provided by our partners, and reflect average nightly room rates, including taxes and fees that are fixed, known to our partners, and due at time of booking. Please see our partners for more details.
OthelloCobalt
13

I love this Hotel. It is perfectly located. Staff is super lovely. It is a family owned business and it is charming and authentic. Value price acnnot be beaten and it ferla almost like home after two stays. There are pancakes for breakfeast amongst other things. 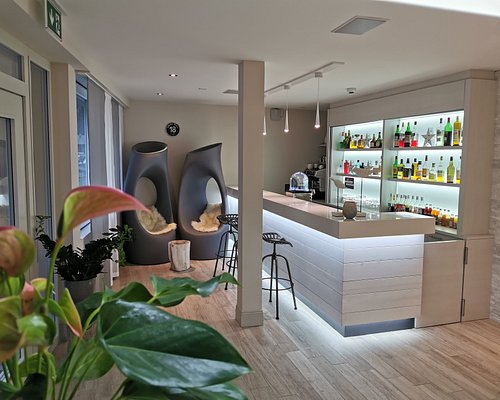 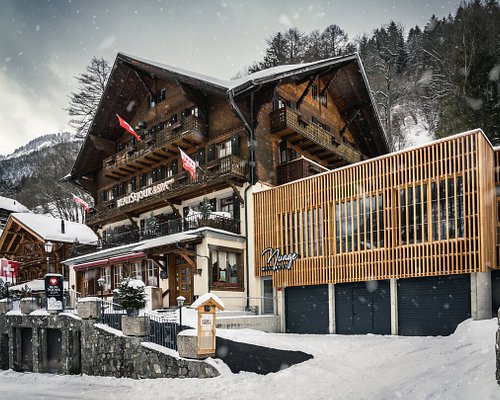 Taking safety measures
We compared the lowest prices from 12 websites

We stayed 3 nights in this absolutely charming family-run hotel. We enjoyed everything about this ideally situated hotel during our recent ski trip to Champery. From the warm and efficient welcome to the convenient spacious boot room with direct access to to the free car park and adjacent to the ski shop. Our spacious 2nd floor room was bright and clean with two windows leading out on to the balcony with stunning views. There were newly-made curtains and shutters to block out the light if necessary. The beds and pillows very comfortable. The large spotless bathroom had a bath with shower. Some bathrooms have been renovated this one hadn’t but was fine. We slept very well, we didn’t hear any noise from inside the hotel or outside. The buffet breakfast serves a variety of delicious bread, jams and pastries some of them home made by the family. There is also a hot buffet of exceptionally good American pancakes, crispy bacon and eggs. A good selection of cereals, cheeses, fruit and fruit juices too. It’s only a 5 minute walk down to the cable car there is also a free shuttle every 30 minutes. From 4pm there’s an amazing after ski Tea Time - tea, coffee, cakes, desserts, biscuits all available for guests, served in the cozy veranda, with comfy sofas and an open fire. Everything is home made made by the Family and is absolutely delicious! In the evening, as there’s no restaurant on-site and due to COVID restrictions, the hotel privatizes a different restaurant in the village each evening for its guests. It works really well and takes the stress out of choosing a restaurant! All safety measures are respected and there are different sittings depending on the number of guests. Another reviewer mentioned church bells during the night, we didn’t hear any and I’m a very light sleeper. Most villages silence the church bells during the night in any case. Throughout our stay the family and staff were amazing! We look forward to returning very soon!

This review is the subjective opinion of a TripAdvisor member and not of TripAdvisor LLC
137cleided
Kleine Scheidegg, Switzerland
1541
Reviewed 2 September 2020 via mobile
Amazing staff and service

My husband and I stay at Hotel Suisse in Champéry, and we both loved their services and attention of the entire staff.
The room was comfortable and very functional as well.
It was a very good choice that worked very well in a rainy weather outside.

The hotel is 5-10 mins. uphill walk from the train & cable car stations. My 3rd. (top) floor room had a full length balcony with direct views of the stunning, towering Dents du Midi mountains.
NB. If planning to stay in the near future, be aware that there is construction work currently going on directly outside the hotel on the village side which started at c7.30 this morning! Noise insulation between rooms is poor, with creaky floorboards & thin walls. There was a fault with my sink plug mechanism, meaning the basin couldn’t be filled, but for a short stay it wasn’t a big issue. Very comfy bed, good full length bath. Non blackout curtain though.

Continental style breakfast is taken in the dining room at level -1. Simple but plenty of choice, particularly numerous bread types & preserves, some home-made. Camilla & Lara were on hand for service & chat with a smile!

The building work aside, the town was very quiet in the evenings & at night, meaning leaving windows open wasn’t a problem, & in fact much-needed with the hot weather! Be aware though that the church, with its 1/2 - & hourly bells, is only c50m. away.

There are various restaurants within minutes of the hotel.

The Tourist Office is opposite the church & particularly good for info. about things to do in Champéry & further afield. On one of my days, I took the train to visit Aigle Château & Leysin. Another day, I did the Défago Galeries hike in Champéry itself ... an absolute must! (see separate reviews)

Despite the few minor issues, I loved my stay at this hotel & would recommend it without hesitation.

This review is the subjective opinion of a TripAdvisor member and not of TripAdvisor LLC
I6737YGlucyp
1
Reviewed 19 February 2020 via mobile
BEST HOTEL IN CHAMPERY!

(Written by my 10 year old daughter!) Very family friendly staff and service. Amazing food the breakfast was extra good. Very clean rooms.It was perfect because we were skiing in Champéry and we could literally just walk to the télépherique.

This review is the subjective opinion of a TripAdvisor member and not of TripAdvisor LLC
Robert16
Yorkshire, England
6172
Reviewed 1 April 2019
My Favourite Ski Hotel, Ever

In past reviews, I have mentioned that a good way to ski major domains is by staying at smaller, secondary villages that have access to them. Samoens or Les Carroz to ski Grand Massif for example. Portes du Soleil, a huge ski area, has a similar facility. To ski Portes du Soleil, one usually thinks first of Morzine or Avoriaz, but it has a large number of smaller villages as alternatives.

Champery initially caught my eye because I was booking late and there were few hotels left anywhere in Europe in places that I wanted to ski. However, I found an affordable room at Hotel Suisse, which made me look at Champery, a place I’d previously never noticed. The more I looked, the more I liked it. It has great train access - 2.5 hours from Geneva Airport to the middle of Champery with just one change. It has a cable car from the centre of town into the Swiss end of Portes du Soleil. So I booked, and off I went.

The village is small, but not tiny, and kind of split into two levels. The lower level has the train station, ski lift station, and a remarkably large sports centre. The upper level is one long, quiet, narrow, pleasantly quaint street that’s full of eating places and characterful bars. There are some further characterful bars on the roads that lead from the upper level to the lower level. A lot of nice après ski opportunities in a compact area, enough for a stay of a week or more, a choice of styles from “authentic” to “chic / cosmopolitan”. It also has an interesting church with a clever audiovisual presentation, at least two supermarkets, a coffee and cake shop, and several good ski shops. Everything you need, packed into a small space. By the way, for a Swiss ski village, it’s relatively cheap.

Hotel Suisse is in the centre of the upper level, the ideal position for après ski, with a free shuttle stop right outside to take you to the ski lift. On arrival, I was greeted with the warmest welcome I’ve ever received at any hotel front desk, the young woman positively glowing with warmth and enthusiasm. I didn’t know it at the time, but that was a foretaste of my time in Champery.

My room was great (an upgrade, apparently). Large, fully equipped, nice bed, and everything in it looked brand new (recently refurbished I think) but with one rather nice antique writing desk. I was initially concerned that the room might be noisy because it overlooked the street, but I needn’t have worried – the street wasn’t noisy at night while I was there, indeed, it wasn’t busy at any time, and in any case, the windows, like everything else, were apparently new, and were double-glazed, tight fitting, nearly soundproof.

The feeling of freshness continued throughout the hotel – everything looked recently refurbished and cared for. The ski and boot room, often small and dingy in many ski hotels, was large and adequately equipped.

Breakfast was basic but nice, what you’d expect from a good three star hotel. More noteworthy though, the hotel provides afternoon après ski cakes with an excellent choice of teas in a very nice lounge with a fine view over the village. Great after a hard day on the mountain.

A bold conclusion to draw from just a four-night stay, but I think Champery could be the friendliest ski village in which I have ever stayed. A British woman who does great crepes and conversation, including insider tips about local skiing, runs the village creperie. This is where I chatted with groups of remarkably friendly people on two separate evenings. Recommended. Walking around the village in the evening, passing strangers would call out a friendly ‘bonjour’. Most memorable though was an evening I dropped into the Bar des Guides for a beer. The Bar des Guides is part of the Hotel Suisse, and it’s very nice - I recommend it even if you aren’t staying at the hotel. While I was there, a group of young hotel staff and their friends, including the woman who greeted me so warmly on my arrival, invited me to join them, and we had a long and delightful conversation, in English (not their native tongues). A hotel guest, who arrived only the day before, treated like a friend; I won’t soon forget.

The Hotel Suisse has even more special things that I’d love to tell you about, but I won’t. I’ll leave you to discover them while you’re there.

Conclusion. Portes du Soleil: recommended. Champery: recommended. Hotel Suisse: highly recommended. I’ve been a skier for 19 years and I’ve stayed in a lot of ski hotels, so I don’t say this lightly: I think this might be my favourite ever ski hotel.

By the end of your review, we all had tears in our eyes.

It is hard to thank you enough for such kindness. We are so pleased that you enjoyed staying in Champéry and especially here with us!
It warms our hearts when guests such as you appreciate all the efforts we put into making every stay a special one!

We really hope we'll be able to welcome you again here quite soon and wish you all the best :)!

Report response as inappropriateThank you. We appreciate your input.
This response is the subjective opinion of the management representative and not of TripAdvisor LLC
View more reviews
PreviousNext
12…
<script type='text/javascript' crossorigin='anonymous' async onerror='__scriptLoadError(this,true);' src='https://static.tacdn.com/assets/Ov85iR.24d1b8a2.js' da