US$147
US$134
View deal
CheapTicketsUS$134
eDreamsUS$147
Orbitz.comUS$134
View all 12 deals
* Prices are provided by our partners, and reflect average nightly room rates, including taxes and fees that are fixed, known to our partners, and due at time of booking. Please see our partners for more details.
Laddi66
Cocoa Beach, Florida
111

This review is of the restaurant/cafe in the Badhotel. The kuchen (cakes) are fantastic! From the Bienenstich to Black Forest Cake, everything is yummy! You can't beat the price for the amount you get. Everything is fresh and appears to be made from scratch. I was visiting Bad Bruckenau for three weeks and continually went back for my afternoon fix!

Trip type: Travelled with family
See all 53 reviews
Nearby Hotels 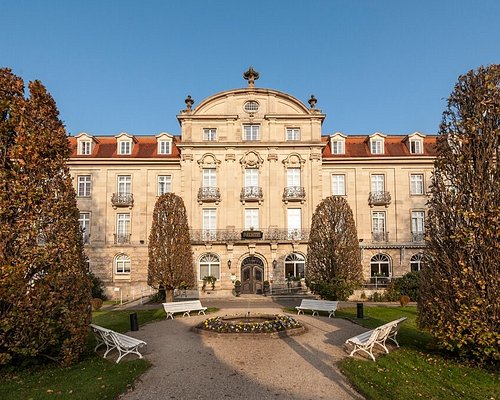 Expedia.com
View deal
Booking.com
Trip.com
US$156
eDreams
US$184
View all 14 deals from US$156
371 reviews
0.1 km from Badhotel Bad Brueckenau
We compared the lowest prices from 14 websites 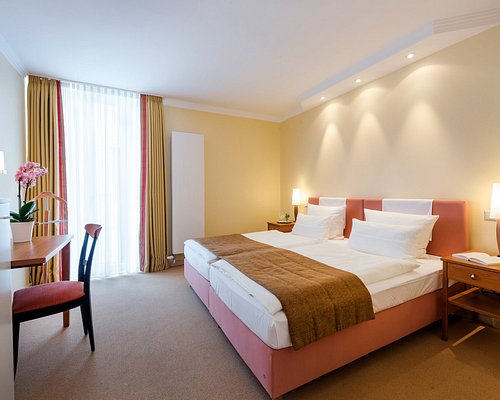 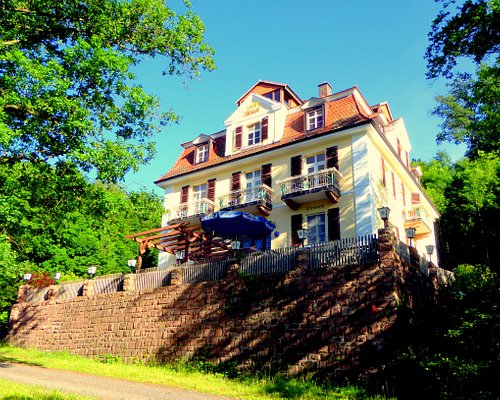 The hotel is in the government buildings of King Ludwig I of Bavaria, built around the 1820s. It has a bit of an air of council buildings about it and some of the decor looks as though it is from the 1960s but hotel is clean and efficient. Staff were all very helpful and friendly and breakfast and dinner were delicious.

This review is the subjective opinion of a TripAdvisor member and not of TripAdvisor LLC
FRuudy
Hassloch, Germany
307148
Reviewed 13 November 2015
OK considering the price

It is an older building where you can already many chips but maintenance seems quite OK. The service is professional and helpful but a smile every now and then would really be appreciated.
The room is again OK, very high ceiling but a little bit musty. Also it was a bit colder already and when I arrived the room temperature was comfortable but as night drew it got pretty cold and I had to turn up the heaters. It still took a while to become warmer again.
Also the minibar was a nuisance - not until 3am but then it took off like an old Lanz bulldog. Thubthubthub... due to my sleepiness it tool me until 4 to locate it and then it was to late. Very bad day ahead.
Breakfast was announced to go from 7:30 - 10 but then I complaint I could start at 7 which was very nice. Which the breakfast was, too. Although no second pot of tea...
Overall everything was OK to good (enough powersockets, WLAN OK although occasionally slow, great hot shower) but I knock off one star for the minibar....

This review is the subjective opinion of a TripAdvisor member and not of TripAdvisor LLC
Michael G
Herzliya, Israel
5445
Reviewed 24 May 2015
Super hotel for a great price

I had a very large room with a view over the gardens, kitchenette (not used) free and fast WIFI, very good buffet breakfast with large selection, friendly staff. Essentially 4*-5* conditions for a 3* price. The surrounding gardens and old palaces with spas were like a picture from a story book.

Room tip: Do not use BOOKING.com to reserve. Found out on arrival that the direct booking price was a few Euros less than than via the web!
Ask Michael G about Badhotel Bad Brueckenau
2  Thank Michael G

This review is the subjective opinion of a TripAdvisor member and not of TripAdvisor LLC
Brightside66
Birmingham, United Kingdom
4731
Reviewed 5 May 2015
Great value for money, friendly, peaceful and nice surroundings

Stayed here recently for the 2nd time on business trip. Great value for money with a nice breakfast. Very quiet hotel in lovely grounds. WiFi reception is better in rooms then at Bar area! Have not yet tried the restaurant.

I stayed here for a business trip in June 2014. The hotel is surrounded by a lovely park area, but the hotel itself is very dated and certainly could do with an uplift with particular focus of the bathrooms which smelt a bit damp and musty.
The WIFI was a major issue for me. especially as a business customer. You had to have token to connect which only lasted an hour and I was initially only given 3 tokens at 4pm on a Sunday afternoon. When I returned from work the next day I asked at reception if I could pay to have it longer, I was then given a 6 hour token, I use an internet based system for my work so this wasn't really adequate either as I couldn't check any emails or do anything in the morning. On my last evening I was told they had run out of 6 hour tokens and was given the 3 1 hour tokens again, which involve logging in and a password each time. My recommendation to the hotel is to invest in a 24 hour WIFI system and either have it free - it is used a lot for business, or have a daily rate, intermittent WIFI access really isn't acceptable anymore.
The breakfast in the hotel was good with lots of variety but my tip is to get there early as it gets really busy and the food soon disappears. The evening food was really good and hearty, and the waiting staff were really friendly, but like most small European hotels the restaurant doesn't open on Sundays, so make sure you have some food with you!