US$164
View deal
Hotels.comUS$142
TravelocityUS$142
Lol.travelUS$170
View all 16 deals
* Prices are provided by our partners, and reflect average nightly room rates, including taxes and fees that are fixed, known to our partners, and due at time of booking. Please see our partners for more details.
melissahN280QX
Lara, Australia
256

We booked here for 2 nights for convenience as we were leaving on a cruise. It’s close to the train station (3 minutes walk) on the waterfront, 2 minutes walk to Hertz car rental and near many shops, bars, cafes and restaurants.

The hotel can organise a shuttle bus pickup for you from the airport and a shuttle to the port if you are taking a cruise.

We found the staff extremely friendly and helpful with any questions or requests.

The room we stayed in was spacious and clean. It had a loft style bedroom upstairs with a couch downstairs that folds out into a bed.

The breakfast was beautiful with a wide selection of pastries & fruits, yoghurts, breads, meats, cheese, eggs, choices of juices, teas and coffee.

The Bistrot (as it’s called) also serves lunch and dinner, however we did not dine at those times.

Great value for money, I would highly recommend this hotel More

Expedia.com
View deal
Booking.com
ZenHotels.com
US$154
Lol.travel
US$160
View all 12 deals from US$154
213 reviews
0.0 km from Hotel San Giorgio
We compared the lowest prices from 12 websites 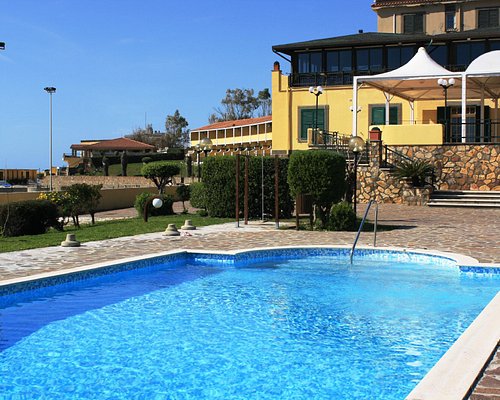 Expedia.com
View deal
Hotels.com
Destinia.com
US$167
Booking.com
US$201
View all 14 deals from US$167
372 reviews
2.6 km from Hotel San Giorgio
We compared the lowest prices from 14 websites

The hotel is lovely to look at, good location and the rooms are small but adequate. If you book this hotel book your shuttle to the cruise ship at the same time, it will be free. The hotel concierges, Alisandro, however is not reliable for information. He suggested I go to Wind, an internet store, for a SIM card for my phone that I was looking for. When I got there they were going to charge me 60 Euros for a 1 month SIM card, meanwhile I knew it should be 20 to 30 Euros. They informed me I would not find another store close by, “It would be far away”. 2 blocks up is a Tim store and it was 20 for 4 weeks. The other misleading information was the shuttle to the ship, he was going to charge me 14 euros plus 2 Euros for each bag, to take the hotel shuttle to the ship. In a short walk using google maps and asking people as I went, I found a free shuttle to the ship. He told me about an 80 year old couple who could not get a taxi, (I had asked about a taxi instead) because it is so busy, so I would for certain need their shuttle because no one knows where the ship will be docked until very late. When I went for my walk, to see where the port was located, I did find where to pick up the free shuttle.
When I got back, I told him to cancel my shuttle for tomorrow because I would be taking a free bus shuttle and suggested he not send anyone to Wind.

Ask A M about Hotel San Giorgio
1  Thank A M

This review is the subjective opinion of a TripAdvisor member and not of TripAdvisor LLC
DDO_9
Dollard-des-Ormeaux, Canada
6280
Reviewed 19 August 2019 via mobile
Only if you are taking a cruise

We stayed at this hotel for one night waiting for our cruise to begin. And this is really what this is about.

Nothing to see. Ideally located walking distance from the cruise terminal (20 minutes walk). We still took the transfer which is expensive but with 4 big piece of luggage, the walk seemed too long.

The room was big but the bathroom looked like it had not been renovated for 20 years. The beds were not comfortable. Although the hotel is facing the beach, you do not see anything from the rooms. No charm, and everything is outdated. But in any event, there is nothing to see in Civitavecchia.

Only reason to stay there is because you are taking a cruise. Otherwise, look elsewhere.

This review is the subjective opinion of a TripAdvisor member and not of TripAdvisor LLC
Mooner80
Perth, Australia
4339
Reviewed 15 August 2019 via mobile
Stay in Rome instead

We stayed at this hotel for 1 night pre-cruise.

This hotel is the best in Civitivecchia, but that is not a great compliment.

The rooms are very dated with , old, cheap beds (like you would find in a hostel), bathrooms straight from the 70s, and an air con that didn’t work properly.

We booked a junior suite thinking that it might be a half way decent room - we were wrong. The ‘suite’ is basically a room with a very high ceiling that has had a mezzanine floor installed. Admittedly, it does have views out over the Med but this didn’t make up for the room being below par in every other sense.

The bed is located upstairs, accessible only by a very steep staircase (which in reality is probably more like a ladder than a set of stairs) so if you have any mobility issues whatsoever, or even if you are just a little unsteady on your feet, I would avoid this room type at all costs. If you were to fall down the mezzanine stairs, I have no doubt that you would break bones and probably put and end to your holiday.

If you are going on a cruise leaving from this Port, I think you’re much better off staying in Rome proper and travelling to Civitivecchia on the day of your cruise.

This review is the subjective opinion of a TripAdvisor member and not of TripAdvisor LLC
11jac
Hemel Hempstead, United Kingdom
2544
Reviewed 11 August 2019 via mobile
Day Room

Booked as a gap between disembarking from a cruise ship and flying home on a late flight. Hotel is well located between port and station. We just needed a safe place for luggage and a quick shower.
Allocated room 208. Photos of room,en-suite and view.I have added photos so you can see the standard of this 4 star establishment.

This review is the subjective opinion of a TripAdvisor member and not of TripAdvisor LLC
Buck G
Charlotte, North Carolina
10737
Reviewed 5 August 2019
Wonderful hotel to start your cruise