US$170
View deal
Free cancellation until 21/09/25
Reserve now, pay at stay
Priceline
FindHotel
ZenHotels.com
View all 7 deals
* Prices are provided by our partners, and reflect average nightly room rates, including taxes and fees that are fixed, known to our partners, and due at time of booking. Please see our partners for more details.
GunhildV
Rostock, Germany
92

We stayed two nights in this cosy hotel in the old town of Greifswald. Large room, wonderful breakfast with the best service for tea drinkers that I have ever come across. Very nice staff. Parking just behind the hotel. We really liked us there!

Trip type: Travelled as a couple
See all 42 reviews
Nearby Hotels 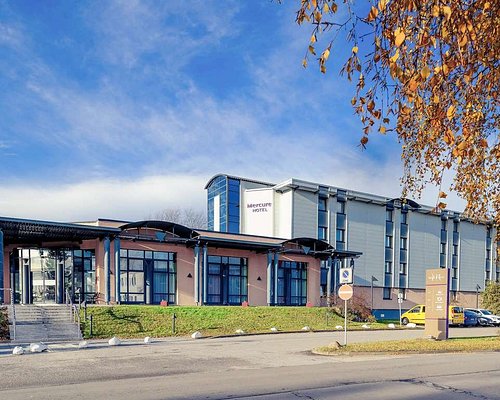 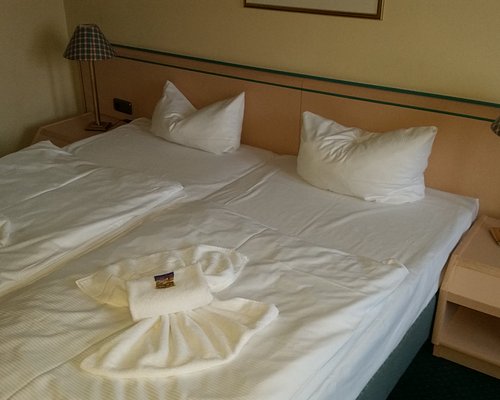 I stayed here for two nights. The name “Kronprinz” (Crown Prince) suggested a long tradition, and the building appeared to be fairly old. The unusual floor numbering (0, 1,2A, 2B, 3A, 3B) was apparently fairly typical in the town’s hotels; it was reflected in the need from my room (207/2A) to go upstairs in order to access the fire exit.
The area around the hotel was picturesque. The hotel was in a quiet main street, but the entrance (photo) was in a side street, not very clearly identified, but the town is small. Very close to the Reception was the lift, which required a key card to operate it – not helpful for guests with a lot of luggage or shopping.
The reception was generally unstaffed, with a bell to call the receptionist from the adjoining restaurant: she was helpful and friendly.
My room (photo) was comfortable, quiet and spacious with a good view from both windows (photo). There was plenty of space to store luggage. The lighting was adequate. In the wardrobe were anti-theft clothes hangers, which are difficult to manipulate. There was no clock; there were radiators but no air conditioning; and no hot drink machine.

There was a big desk for a computer (photo), with one power point in a fairly convenient location. Internet access was free. WiFi instructions (photo) were old-fashioned and complicated; after repeated attempts, I succeeded in getting limited Internet access for my mobile phone, but despite further repeated attempts, not for my laptop, although I carefully followed the instructions. When the key card was removed from the power socket, all electricity went off, so it was best to turn off your computer when leaving the room.
There was a very extensive, printed hotel directory, in German, English and Swedish. It mentioned the TV but did not include a guide; there were some 40 channels, one of which (33) was in French, and some radio stations.
The shower room (photo) was very large; there was a reasonable supply of hot water. The exit from the shower was quite narrow, the shower floor was slippery (no non-slip shower mat), with a step down. The hair dryer was very visible, with a power point was next to it. There was no night light, as far as I could establish.

The breakfast room was more than adequately big when I was there, and the room no. check was unobtrusive. The breakfast buffet (included in the room price) was good, with some hot dishes, including boiled eggs, with attentive staff. As usual, the glasses for fruit juice were minuscule. There were no table waste containers (Tischabfall – photo, from the Holiday Inn Express in Berlin), common in Germany: they would have been helpful, especially on the small tables.
At the Reception, there were plenty of newspapers for sale, all in German.

This review is the subjective opinion of a Tripadvisor member and not of TripAdvisor LLC.
294dannyv
Carlsbad, California
18778
Reviewed 26 September 2017 via mobile
Cozy hotel

Great cozy hotel in the center of Greifswald. Walking distance to everything, comfortable room, friendly staff, good bar and delicious included breakfast. Very good value, perfect for a few nights if you come to the area for business

This review is the subjective opinion of a Tripadvisor member and not of TripAdvisor LLC.
T C
Edinburgh, United Kingdom
2514
Reviewed 23 August 2017
Everything excellent - except the W-iFi

We had a large and comfortable room, which was spotlessly clean. The room was also in principle quite, facing the courtyard. Unfortunately some late night drinking made some noise during the night, so a front facing bedroom might in fact be a better choice. The staff were very friendly and helpful, and I want to specially mention the breakfast. Probably the best buffet breakfast I have experienced anywhere. The one and only drawback was the Wi-Fi. Signal was weak and on several occasions it was impossible to log in, which was very frustrating. If it wasn't for the inadequate Wi-Fi I would have awarded the hotel top marks.

Room tip: Consider having a front facing room in view of the partying going on at night in the courtyard.
Ask T C about Hotel Kronprinz
1  Thank T C

This review is the subjective opinion of a Tripadvisor member and not of TripAdvisor LLC.
Gyorgy M
Budapest, Hungary
13163
Reviewed 17 July 2016
Nice hotel in the heart of Greifswald

I liked my stay in this hotel. The hotel staff was very friendly and helpful. The fridge in my room did not work when I arrived - and they fixed it within an hour. Breakfast good quality and inexpensive. They had salmon on the breakfast table - which is a big plus in my exes :) The wifi worked well in the whole property. Maybe an in-room safe would be a good idea. I will book it again.

This review is the subjective opinion of a Tripadvisor member and not of TripAdvisor LLC.
Saloio
Sussex
7373
Reviewed 4 July 2016
Very convenient.

Not that easy to find initially in the one-way system but worth it. Appears to have had a recent refurbishment, everywhere was bright and clean. Our room was spacious and had all the facilities you could require. The hotel has free parking and is just a short walk from the centre of town.
We received a very pleasant welcome. All staff were very kind and helpful despite our lack of German.
We ate in the restaurant each night. Not a very broad menu but adequate and the food was well cooked and well presented. The desserts especially were something else!

This review is the subjective opinion of a Tripadvisor member and not of TripAdvisor LLC.
View more reviews
PreviousNext
12…
<script type='text/javascript' crossorigin='anonymous' async onerror='__scriptLoadError(this,true);' src='ht