Hotel Astrid
Lowest prices for your stay
Lock in the lowest price from these sites
US$108
US$96
Free cancellation until 21/08/05
View deal
Expedia.comUS$108
Hotels.comUS$108
PricelineUS$96
TravelocityUS$108
eDreamsUS$96
Orbitz.comUS$108
View all 15 deals
* Prices are provided by our partners, and reflect average nightly room rates, including taxes and fees that are fixed, known to our partners, and due at time of booking. Please see our partners for more details.
butterandjelly
Cleveland, Ohio
239118

lovely proprietor, she rushed to get our room ready when we arrived early

rooms are comfortable and clean, the location is right in the heart of town

breakfast was wonderful: fresh bread and croissants with butter and jam, yogurt, orange juice, and a pot of coffee delivered to our room at a time of our choosing...except we didn't realize that it's not included in the room rate and were surprised to be charged 9 euro per person per day upon checkout.

See all 194 reviews
Nearby Hotels 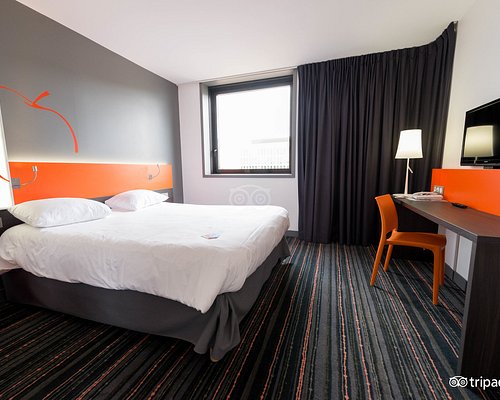 My wife and I stayed in this hotel twice, at the beginning and the end of our trip to Normandy. We liked it and found the personnel friendly and helpful. The breakfast, served in the room, was good. The location in central Caen worked out well for us. However, I give the hotel a poor rating because we were double billed: once to reservations intermediaries and once (twice, actually) directly to the hotel. We should have paid for our breakfasts and local taxes when we checked out, but were billed the price of the room in addition both times. We had already paid on-line for the rooms. I can understand a simple mistake by the staff, but the real problem was resolving the double charges. In both cases (I used two different on-line agencies) the on-line companies had to refund our money because they could not get satisfaction from the Hotel Astrid. Nor could I after I emailed them about the problem (in French; the staff doesn't speak English, but my French is passable.) Eventually we got our refunds, but it took many emails and phone calls, which became annoying.

This review is the subjective opinion of a TripAdvisor member and not of TripAdvisor LLC
S_Hvass
Bramming, Denmark
460203
Reviewed 15 September 2018
Really nice and clean hotel

This is a really nice hotel for a night or two. The rooms are small, but very clean. The lady in the reception was very welcoming and helpful. We liked everything about it except from the night restaurant across the street. The guests there stood out on the street the whole night talking and shouting. Closing the window did help though. The hotel itself was nice and quiet. Value for money is very high.

This review is the subjective opinion of a TripAdvisor member and not of TripAdvisor LLC
Aldo B
Como, Italy
29798
Reviewed 19 August 2018
Right place for a short slot in Caen

I and my wife have been here during our Summer 2018 Normandy’s tour. The rate was fair considering the quality of the service.
The location is really good in the middle of the way between the commercial (shops) area and the restaurant area. Room was not big and not small. For sure clean and tidy.
Woman at the reception was really nice providing information on possible dinner area and also some more about Caen Memorial. Absolutely suggested.
Hotel parking is not available but the area is plenty of parking locations.

Ask Aldo B about Hotel Astrid
Thank Aldo B

This review is the subjective opinion of a TripAdvisor member and not of TripAdvisor LLC
NicolaC0791
Southend-on-Sea, United Kingdom
2159
Reviewed 12 August 2018 via mobile
Excellent Location

Excellent location for visiting the sights in Caen.
Rooms are small but comfortable with a small bathroom but lovley hot roomy shower.
Continental Breakfast can be served in the room if requested.
Car parks are a short walk from the hotel, so parking was not a problem.
Clean comfortable and great base to see Caen from.

This review is the subjective opinion of a TripAdvisor member and not of TripAdvisor LLC
Susan M
Austin, Texas
384192
Reviewed 10 July 2018
Tiny Space, No Elevator

This hotel room felt almost like a hostel. The room was very tiny and the soap and shampoo (no conditioner) were apportioned in small amounts. The staff was fine, but did not go out of their way, and it is best if you speak French, as their English is limited. Get a room on a lower floor --- there is no elevator. Also no air conditioning, so beware during hot weather. Breakfast not included. This must be an expensive town, because the price of the room (2-star hotel) was not cheap.