US$147
US$134
View deal
Free cancellation until 21/09/22
Booking.comUS$147
PricelineUS$147
TravelocityUS$147
View all 18 deals
* Prices are provided by our partners, and reflect average nightly room rates, including taxes and fees that are fixed, known to our partners, and due at time of booking. Please see our partners for more details.
bertie515
Beverley, United Kingdom
4938

We stayed here while travelling to Spain with our two dogs as we were visiting friends in the area. The hotel is situated a little away from the city centre but near a lot of conference centres. The on site parking was handy and free of charge. The lady on reception was so friendly and helpful. The room was very large and had a fabulous bath. We didn’t eat at the hotel but the restaurant was very full on the evening so we assume the food was really good!

Trip type: Travelled as a couple
See all 303 reviews
Nearby Hotels 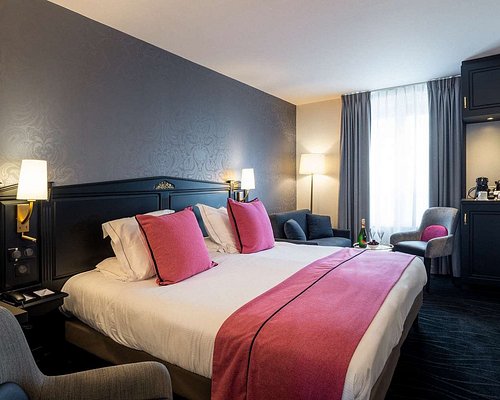 Expedia.com
View deal
Pay up to 12X
Tripadvisor
US$72
Hotels.com
Destinia.com
US$139
View all 17 deals from US$72
48 reviews
3.2 km from Ivan Vautier Hotel
We compared the lowest prices from 17 websites
Ibis Budget Caen Centre Gare
US$79
US$69

I stayed several nights at the hotel.The rooms were nice and clean. The decor was modern and it seems like alot of attention was paid to every little detail(design of storage space, light fixtures, furniture layout, bathroom decor).
The meal at the restaurant was excellent!

This review is the subjective opinion of a Tripadvisor member and not of TripAdvisor LLC.
NettaSade
Tel Aviv, Israel
509
Reviewed 30 September 2018 via mobile
Big comfortable room

The suite is very big and comfortable. Breakfast is very good!!!! The Croissant wowww!! The bed is very comfortable also. The shower is opened so pay attention... we couldn’t close the door of the toilet which was Annoying (maybe only at that room and they can fix it). There is a wonderful Michelin restaurant (1 star) at the hotel.
There is a great pizza bus very close to the hotel.

This review is the subjective opinion of a Tripadvisor member and not of TripAdvisor LLC.
Robert O
7
Reviewed 23 September 2018
A big disapointment

Last night of a short 4 night stay in France and this should have been the best 5 Star with a Michelin * restaurant attached. Arrived about 6 pm and the place was like the Marie Celeste with no one about. Eventually shown our room, it is one of those places with no natural lighting in the corridors so very depressing. The whole place smelt of I think disinfectant even the room. Room was OK but not 5 star. Dumped our bags and went for a drink only to find no bar as such. The area which there were drink bottles and called itself the bar was obviously being prepared for an event so there was nowhere to sit, we eventually after some time managed to order two G and T's which we had to balance on the window sill. Meal was OK and there was a few other diners, décor in the dining room was awful obviously a throw back to the seventies. Left in the morning without having had breakfast----couldn't face the dining room again.

This review is the subjective opinion of a Tripadvisor member and not of TripAdvisor LLC.
campsitechick
Totton, United Kingdom
7550
Reviewed 4 August 2018 via mobile
Room A* - Staff A* - Spa D minus!

We stayed at the hotel for two nights as a bookend to our trip to the southern region of France.
We were very impressed with the staff at reception - Lucas or Luca I think his name was, was very attentive.
We didn’t eat breakfast as there is a small bakery down the road so we chose to buy croissants from there for a couple of euro instead.
Parking is secure and the hotel was very easy to find using our sat nav from the ferry port.
Night 1 we had a room on floor 2 - sort of attic space I think. Night 2 we had a room on floor 1 (I must reinforce that I there was a week between our stays! We weren’t moved rooms!!!) both rooms were clean, a complimentary bottle of water provided, huge beds, robes, nice toiletries etc.
The only reason we haven’t given it 5 ***** is because of the spa. We chose to go into the spa on the last day before catching the ferry. The spa is €15 each even if you’re a hotel guest. We checked out & went into the spa to find that there were no changing facilities - the lady at the desk explained that we could check back into our room but that it might be in use... fortunately the spa was empty so we were able to shower in there & then change in the shower cubicle. Not ideal since it was a mixed sex shower so we were nervous about someone coming in whilst we were getting changed!
The sauna and steam were nice enough - what I would expect from a hotel spa.
The jacuzzis could have been lovely: a sit down one and a lay down one however they didn’t seem very clean at all - lots of soap scum on the top which made me feel a bit unclean but nothing that a good shower wouldn’t fix.
I had a treatment there - this was lovely - I couldn’t fault it.
We would go back again but wouldn’t use the spa.

This review is the subjective opinion of a Tripadvisor member and not of TripAdvisor LLC.
Paul H
Chew Stoke, United Kingdom
7342
Reviewed 27 July 2018
Could be better

This place has probably seen better days. Booked two rooms (Junior Suite and double room with two beds) Junior suite was a little badly maintained (eg some lights not working) and the toilet was a fair distance from the bathroom - which I guess is a design thing - but found it a bit inconvenient. The double room was fine apart from they did not honour the request for two single beds which meant the occupants had to share a double. Also felt some of the hotel staff were a little unwelcoming...