Would not recommend - Carrington House Hotel

US$132
US$115
View deal
Free cancellation until 21/08/15
Priceline
eDreamsUS$117
Lol.travelUS$132
View all 16 deals
* Prices are provided by our partners, and reflect average nightly room rates, including taxes and fees that are fixed, known to our partners, and due at time of booking. Please see our partners for more details.
shannonmL7443FT
5

This hotel is very tired and dated. There is odd mismatched carpet through all of the corridors and stairs, all very tired and stained.
I tried on numerous occasions to contact the hotel by email, telephone, via booking.com but never got through or received a reply.
The room was very tired, bathroom ceiling had damp and mould patches and only 1 towel provided for 2 guests.
The positives - the bed was comfy, the location is okay, the staff at the front desk were lovely even with all of the complaints they were receiving (whilst checking in, 2 guests complained that their room didn't have any windows & they were informed by maintenance staff that 2 entire floors had an issue causing them to be without electricity!)
Overall I would not stay at this hotel again.More

Show less
Room tip: Ensure you request a room with windows if you can get hold of anyone before your stay.
See all 1 707 reviews
Nearby Hotels 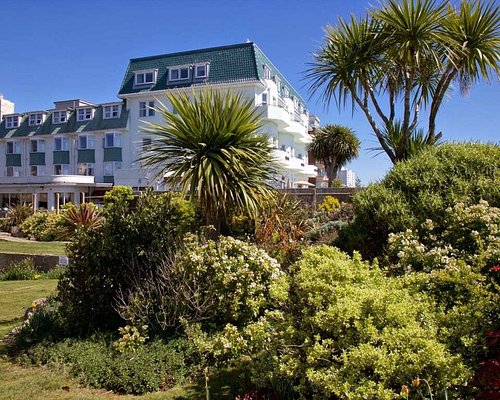 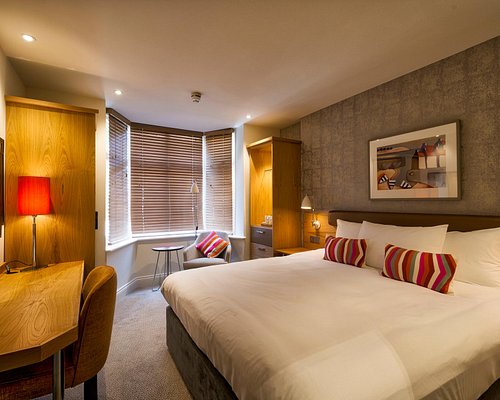 Hotels.com
View deal
Booking.com
ZenHotels.com
US$263
eDreams
View all 12 deals from US$263
1 716 reviews
2.0 km from Carrington House Hotel
We compared the lowest prices from 12 websites
The Cumberland Hotel

Expedia.com
View deal
Booking.com
US$146
FindHotel
US$137
Hotels.com
View all 16 deals from US$137
762 reviews
0.5 km from Carrington House Hotel
We compared the lowest prices from 16 websites
10% less than usual
Sponsored
The Cottonwood Boutique Hotel
US$156

Arrived 7th June part of a coach trip , if I had booked directly I would not have stayed , wound definitely walk out . Room allocated was filthy , vomit ? Stain down bed base , mattress staff Ned and lumpy , carpet had more stains than pattern. Hall way carpets not vaccines since built looking at them , frayed and ripped , stuck together with tape , trip hazzard . Food served was terrible , we did not eat there due to this . No garden to sit and was miles out from promenade. Horrible , grim place , do not book . Showers were dribbling , impossible to wash your hair . Bathrooms dated and old . Only good thing was the staff who were allhard working and very pleasant.

This review is the subjective opinion of a TripAdvisor member and not of TripAdvisor LLC
NorthStar01803663299
Wokingham, United Kingdom
11
Reviewed 8 June 2021 via mobile
Dirty room

We booked a double bedroom on the 29 May for 2 nights. The room stinks, toilets unclean and sink leaking , windows so dirty as looks like not clean for a year. As we can’t stay another night we decided to check out and go home instead… this is the worst hotel I’ve ever been.

This review is the subjective opinion of a TripAdvisor member and not of TripAdvisor LLC
warwickIW
6
Reviewed 6 June 2021
old, tired & unloved

where to start........ peeling wallpaper, mould around the bath, swimming pool out of service, limited car parking. tried contacting head-office but no response. reception couldn't provide a name or number to call. my advice...... whatever the price, stay somewhere else!

This review is the subjective opinion of a TripAdvisor member and not of TripAdvisor LLC
Laura P
Salisbury, United Kingdom
7336
Reviewed 6 June 2021
Really really awful

If you enjoy chewing gum on your headboard, stick on nails embedded in your carpet, the smell of weed wafting down your corridor, dust and dirt in your room and a scattering of miscellaneous crap on taped-together carpets, you’ve come to the right place! Oh, and not to mention the highly rude and unhelpful staff and a breakfast featuring croissants that look like something my spaniel excreted some months ago, a geriatric willy for a sausage and a snotty egg, this is the one for you!

We asked to move rooms after 30 seconds of arriving in our first room due to it being so abhorrent and were moved to a marginally better one. When politely pointing out our concerns about the lack of cleanliness and tired decor we were told it was a ‘budget hotel’ (i.e. shut up and lump it). Having paid over £180 for 2 nights, we beg to differ - there are far nicer hostels out there for less than this festering turd of a hotel.

We were meant to be staying for 2 nights but checked out after 1 due to the heating being on all night (despite it already being very muggy). We nearly left at midnight as it was so uncomfortable for both us and our poor dog. On calling Reception, we were told an engineer was coming out to look at the heating the next day as no one knew how to turn it off. However, on complaining about this to the manager in the morning, she denied that the heating had been on at all. Apparently we were the only people who had complained about the heat - while queuing (for ages) for our breakfast, we heard 2 other people complain about this, suggesting the manager has an interesting relationship with the truth or has possibly lost her grip on reality due to spending too much time at the Carrington Hotel.

For the cherry on top, my partner heard a young couple also complain about the heat. It transpired they had moved rooms due to this but were treated to a complimentary pair of knickers left behind by a previous Carrington victim. The ungrateful customer thrust the knickers at the Reception staff as for some reason she did not wish to accept this added extra. Some would say this casts doubt on the legitimacy of the ‘sterilised for your safety’ stickers stuck around the hotel rooms by the non existent cleaning staff.

All in all, this was a very disappointing experience and put a dampener on our weekend away. Despite receiving a partial refund, no apologies were forthcoming from the delightful Reception team. Approach with caution (and a hazard suit).

This review is the subjective opinion of a TripAdvisor member and not of TripAdvisor LLC
TerryBunks
Birmingham, United Kingdom
3668
Reviewed 27 May 2021
Terrible

room was dirty, non of the windows could be opened, no hot water and bathroom had hairs around the bath and tiles,we found crisps on the carpet next to the bed and parking was a free for all. a poor hotel by any standards