We arrived in the late afternoon, as we were not aware of the long time needed to travel the road from the Bobonong side. Misinformed by an article in a well-known travel magazine. I phoned the cell number on my receipt repeatedly but received no reply. On arrival we then asked about a chalet or hut but the lady at reception did not know how to deal with the request. We set up camp in the dark, only to find that we were right next to a bush hut which would have been ideal. However, the camp site number 5 was wonderful and Isaac looked after us very well. Had an exciting overnight encounter with 2 elephants.More

Thank you so much for your review and comment about booking an alternative with us - we will certainly make sure this is attended to.

The beauty of our camp sites is the interaction with wildlife in the area and it can provide some adrenalin-pumping encounters so very happy you saw the elephants.

Report response as inappropriateThank you. We appreciate your input.
This response is the subjective opinion of the management representative and not of TripAdvisor LLC
See all 35 reviews
Nearby Hotels
Doornstock Lodge
US$33

Hotels.com
View Deal
Pay up to 12X
Expedia.com
US$33
Booking.com
US$30
Agoda.com
US$34
View all 9 deals from US$30
0 reviews
53.9 km from Limpopo River Lodge
We compared the lowest prices from 9 websites 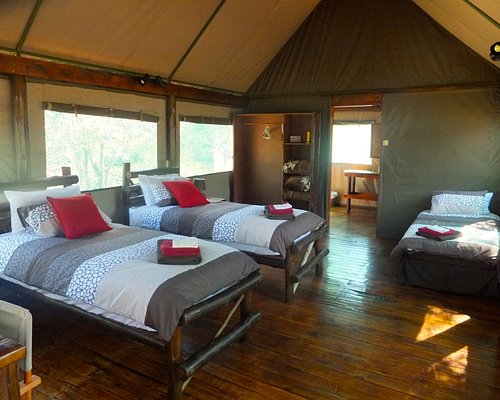 What an amazing place to stay. We have just returned from a 6 night stay in the campsite which was wonderfully maintained by Isaac. We were fortunate enough to see a group of five wild dog as well as a very new baby elephant( mother still had a lot of goop hanging out!) We will definitely be returning to refresh our souls again

Thank you for your review of Limpopo River Lodge. It isa special place to unwind and recharge one's batteries.

Wonderful news that you saw the wild dogs - they have been around for a few weeks now and we are hoping they will den/have denned on Limpopo River Lodge. If you got any pictures we would be very grateful if you emailed us as we are gathering data and these dogs and trying to ID all of them.

Report response as inappropriateThank you. We appreciate your input.
This response is the subjective opinion of the management representative and not of TripAdvisor LLC
Theoboshoff19
4
Reviewed 19 June 2019
Fantastic, wild experience

We camped there over the long weekend and it really exceeded our expectations. Knowing that it did not fall within a nature reserve or national park, we expected good birding by the river but we did not expect to see the amount of game we saw. We saw elephants at each waterhole, plenty of plains game, wild dog tracks and great birding but the highlight must be hearing the resident leopard calling next to the river each evening. The campsites are very well kept and there was always hot water availible, even early morning. Will definately be back and recommend to others.

Room tip: campsites 1, 2 and 6 seem to have the best views of the river
Ask Theoboshoff19 about Limpopo River Lodge
Thank Theoboshoff19

Thank you very much for visiting us and for your review of our Reserve. We are delighted that you saw so much. Just after you left guests saw the wild dogs at Motswiri Pan - seven of them - so they are back on the Reserve.

Thank you very much for the pictures of your cam trap - the leopard was incredible to see!

Please do visit us again.

Report response as inappropriateThank you. We appreciate your input.
This response is the subjective opinion of the management representative and not of TripAdvisor LLC
EbenSnyman
3
Reviewed 4 June 2019 via mobile
Beautiful camp sites

A group of friends recently spent 3 days at the campsites of Limpopo River lodge. It was perfect!
Camping on the unspoilt
bank of the Limpopo river.
Excellent birding.
The campsites are shady under giant trees and right on the bank of the river.
The ablution facilities are clean, modern and well kept. Isak saw to it that we never ran out of hot water. Some of the group stayed in the cabins so we had the kitchen available to us. It is well equipped with a gas stove and fridge.
We will always think back with fondest memories to the calls of the fish eagle, the soothing sound of the river and the light of our campfires in this beautiful camp.

Thank you so much for visiting us and reviewing our facilities. We are very proud of the experience we provide and get to share with guests in this special part of Botswana.

There is nothing better than to get away from it all, have no comms and just absorb what nature offers.

We hope to welcome you and your friends back in the future.

Report response as inappropriateThank you. We appreciate your input.
This response is the subjective opinion of the management representative and not of TripAdvisor LLC
Brett o
Gaborone, Botswana
2
Reviewed 14 May 2019
Amazing weekend

We camped for 2 nights and found the campsites clean, ablutions were basic but clean and water was hot. Game viewing from our own vehicle yielded spectacular photos of elephant, giraffe, wildebeest, kudu and of course many other smaller buck like impala and duiker, many stunning birds including African fish eagle. Of course, a trip to the Limpopo would not b complete without a croc or two floating by and my highlight was a rather heated chat with a line hippo at 4am...all in all we really enjoyed the time close to nature..and far away from cell towers.

Trip type: Travelled with friends
Review collected in partnership with this hotel
This business uses tools provided by Tripadvisor (or one of its official Review Collection Partners) to encourage and collect guest reviews, including this one.
Ask Brett o about Limpopo River Lodge
Thank Brett o

Thank you for your review of our Reserve - much appreciated.

Great news that you got good pictures of our creatures great and small. How lucky to have the hippo nearby - they are not always there but do put on a good show when they arrive.

We are now starting to see the predators again and this last week guests saw wild dog,lion and leopard to add to the collection of sightings.

Report response as inappropriateThank you. We appreciate your input.
This response is the subjective opinion of the management representative and not of TripAdvisor LLC
kalaharicruiser
Gaborone, Botswana
225
Reviewed 8 May 2019
The Good, the Bad and the Ugly.

After a long 7hr drive from Gaborone we arrived at the reception around 5pm, met a lady there who was not expecting us and told us that there was no booking under our name for the bush camp even though we had prepaid and received confirmation the day before. She then proceeded to call her manager and quite hilariously although unprofessionally dished out a piece of her mind to the manager who had obviously messed up. Because it was late and the bush camp hadn't been prepared for us, her only option was to send us down to the lodge for the night and she said it would have to be sorted the next day. We thanked her and took a slow drive to the lodge, met some friendly staff who were quickly making up our rooms. The lodge accommodation and kitchen is simple and straight forward, nothing too amazing. We quickly prepared our dinner and sat around the camp fire, unfortunately missing sundown with the delays. The highlight of the trip were the elephants that swam across the river to the opposite shore of our room to munch on the vegetation on the other side, and waking up all the baboons in the trees in the process. We also had a visit from a very friendly young Genet that had obviously been fed by previous guests as he waited patiently for something to eat and was almost tame. We don't feed wild animals period, so he went hungry - Next morning we moved across to the bush camp, where we wanted to be originally as our friends were camping in the campsite. We had a nice braai that evening, but did not sleep at all due to the ferocious mosquitoes that plagued us the whole night, even though we drenched ourselves in Peaceful Sleep they were relentless.
Suggestions for management:
1. Improve your communication to your staff - there seems to be a breakdown, as they told us the booking problem happens all the time and in fact it happened again on the same weekend we were there with someone else.
2. Invest in some mosquito nets for the Bush camp - they not expensive.
3. Clear some of the underbrush between the rooms and the river, it would greatly improve the view.
4. Make a few signs discouraging the feeding of animals.
5. Fix the creaky bed at the bush camp
To be totally honest I doubt we will be returning to Limpopo River Lodge, maybe my expectation was too high, but I left disappointed. We will try other facilities in the area to compare, who knows maybe it will turn out to be the best in the bunch.
Note to travelers, avoid the A1 road on Sundays! You've been warned!

Room tip: Rather Camp
Trip type: Travelled with friends
Review collected in partnership with this hotel
This business uses tools provided by Tripadvisor (or one of its official Review Collection Partners) to encourage and collect guest reviews, including this one.
Ask kalaharicruiser about Limpopo River Lodge
Thank kalaharicruiser

Thank you for taking the time to review your stay at Limpopo River Lodge - all feedback is valuable to us in order to improve our offering.

We apologise for you having to bear witness to the interaction with the reception staff and this will not happen again.

The genets are wild but seem to habituate quite easily to lodges - I have personally seen three at a time in the outdoor kitchens just sitting on the walls or in the trees near the braais. I have also witnessed them hunting rats which they are masters at so fortunately they are not reliant on being fed at all. We will discreetly discourage guests from feeding them.

We do hope that you will reconsider visiting Limpopo River Lodge - it is a magnificent Reserve with great wildlife viewings - only this week guests have seen wild dog, lion, leopard and all the plains game which calls this part of the world their home.

Thank you for visiting us and let's make sure you come back for another visit.

Report response as inappropriateThank you. We appreciate your input.
This response is the subjective opinion of the management representative and not of TripAdvisor LLC
View more reviews
PreviousNext
123…6
<script type='text