“Nice”
cTd3XzQwXzJHcw==
other travellers have booked this property 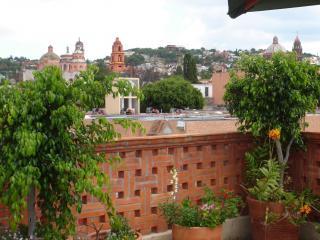 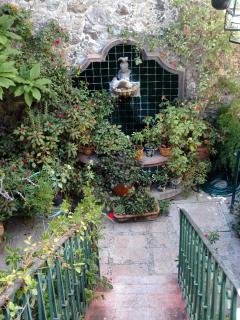 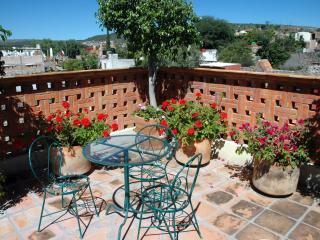 Excellent - based on 58 reviews
Write a Review

Lovely cool, spacious apartment rental. Melissa had a huge bouquet of fresh flowers that greeted us with orchid perfume every time we came in. she also helped us with travel arrangements from/to our airports. Her housekeeper made up the apt everyday. We did not use the kitchen much but I can see it being helpful for longer stays (we were there for 6 days).
It is in a central location where you can walk to the city center or take a taxi pretty much anywhere. The city itself was much busier than I expected. Tourism is one of the main economies of San Miguel & I found out it tends to be busier starting August to April. I recommend visiting nearby Guanajuato if you can.

Date of stay: August 2015
Travelling group: Spouse/Partner
Would you recommend this hotel to a friend?   Yes.
Was this review helpful? Yes
This review is the subjective opinion of a TripAdvisor member and not of TripAdvisor LLC
Problem with this review? Thank you. We appreciate your input.

Casa de las Divas is a hidden gem, this was our first trip to San Miguel and the location in the Centro Historico was a perfect base to explore this magical city. Our Casita was charming, the patio a beautiful oasis & the daily maid service an unexpected treat!!! The owner was very helpful in guiding us to many services, great tour guide , with updates on what was happening in San Miguel & where to have delicious breakfast! Hoping to return to Casa de las Divas again!!!

Date of stay: December 2014
Liked best: The hidden oasis feeling of the patio
Liked least: Mattress
Travelling group: Spouse/Partner
Your age range 50-64
Would you recommend this hotel to a friend?   Yes.
Was this review helpful? Yes
This review is the subjective opinion of a TripAdvisor member and not of TripAdvisor LLC
Problem with this review? Thank you. We appreciate your input.

My husband and I stayed here with our oldest daughter over the week of New Year's. It was perfect. The rooms are spacious, decorated nicely and clean. The roof terrace was like having a extra outdoor room with a view. Melissa was great with giving us a recommendation for a driver from the airport and very helpful with any questions we had. The location is great because it's within walking distance of everything, yet far enough away from the plaza that it was peaceful. Thank you Melissa!

Date of stay: December 2014
Travelling group: Extended Family
Your age range 50-64
Would you recommend this hotel to a friend?   Yes.
Was this review helpful? Yes
This review is the subjective opinion of a TripAdvisor member and not of TripAdvisor LLC
Problem with this review? Thank you. We appreciate your input.

Can't say enough about how wonderful our stay was. And Melissa is the ultimate hostess, running to get us when a small parade went by and many suggestions on where to eat. I read the post from the person about a mouse. That's ridiculous, the resident cat, who is adorable and will gladly come into your casita if you invite her would not put up with that. We were there over Thanksgiving and it was delightful.

Date of stay: November 2014
Travelling group: Teenagers
Would you recommend this hotel to a friend?   Yes.
Recommended for:
Was this review helpful? Yes
This review is the subjective opinion of a TripAdvisor member and not of TripAdvisor LLC
Problem with this review? Thank you. We appreciate your input.

I booked the lower unit of Casa de las Divas for 10 nights on airbnb and paid about $872. It seemed like a good deal as I was sharing the unit with my sister who was flying in from Texas. I stayed there the first night by myself and my sister joined me the next night. Unfortunately on the third day I noticed a rat in the kitchen and I notified the owner, Melissa. She said that she had never had rats in the unit but sent her maid to buy some rat poison to put in the kitchen. That night as my sister was reading a book in bed about 9 pm with the lights on, the rat crawled across her bed. She screamed and I told her to come and sleep with me in the smaller bedroom. As she entered the room, she noticed a scorpion on the window will near the bed. I have attached a photo of the scorpion. We immediately left and found another place to stay. I notified airbnb and Melissa and requested a refund. Intially Melissa denied my request for a refund; later she offered a 50% refund when I refused to return the keys; I offered to return the keys for $400 in cash but she refused to do so. In the mean time, she has rented the unit to others and is keeping all the money. While perhaps the rat or rats and the scorpions are not her problem and could happen to anyone in Mexico, it is the way that she treated me that I object to the most. BEWARE. Do not give her a non-refundable amount without having proper travel insurance. If I had done so, I would not be out such a large sum of money in addition to having a bad experience. She is not nice or gracious and I suppose that she is desperate for the money otherwise she would have refunded my money, no questions asked.

Date of stay: November 2014
Liked best: The location
Liked least: The owner and the presence of rats and a scorpion
Travelling group: Other
Would you recommend this hotel to a friend?   No.
Was this review helpful? Yes
This review is the subjective opinion of a TripAdvisor member and not of TripAdvisor LLC
I had two gentleman that left the casita the same day this person arrived who left me a 5 star review on Airbnb. This woman booked and paid for one person and then had her sister arrive the next day.


I live on the property and my housekeeper cleans the casita thoroughly several times a week. On the day that this person claimed they saw a small mouse not rat, I informed her that we had never seen any mice or rats on the property in the 10+ years that I have owned it. I did have mouse poison purchased and put in the casita as a precaution.

The next morning I had received numerous emails from this person her sister had now seen a rat and they had left. She accused me of being a liar and that I had told her originally I kept a cat on the premises to kill rats. I have a cat and two dogs that I have for my pleasure and company. She made numerous other false accusations.
I called an inspector/exterminator to come inspect the casita and the beds were moved, closets searched and he found no evidence of mice or rats. He said you can always see traces. He sent me a report which I provided to Airbnb. We noticed that the tray of mouse poison was empty which he said was unusal that mice or rats would leave a trace. We discovered the poison had been placed in the bottom of the trash can in the kitchen which was very suspicious.

This person kept threatening to give my keys to anyone she met if I did not refund her deposit. Airbnb chose to cancel her reservation and not give her a refund I assume based on her actions.

I did not rent out the casita for more money during her rental time after she left.

I have no idea why this woman behaved as she did. My other reviews should suffice for a true depiction of my lovely casitas.
This response is the subjective opinion of the management representative and not of TripAdvisor LLC
Problem with this review? Thank you. We appreciate your input.
Previous Next
1 2 3 4 5 6 … 12
Updating list...
Do you own a holiday rental? List it here.

Looking for a place to stay in San Miguel de Allende?
View all 368 holiday rentals