US$83
US$63
View deal
SAVE US$20
Free cancellation until 21/04/30
eDreams
Orbitz.com
getaroom.comUS$83
View all 17 deals
* Prices are provided by our partners, and reflect average nightly room rates, including taxes and fees that are fixed, known to our partners, and due at time of booking. Please see our partners for more details.
Kim C
104

Sorry the other people had such bad reviews but I just returned from their having 1st visited over 24 years ago. I had asked for a top floor room (#631) because climbing those stairs (112 from lobby to top floor) was a way for this 67 year old to make up for skipping my Silver Sneaker Classes back in Minneapolis. Sure my room could have used a small refrigerator or black out curtains; however it was very clean, large, wifi not great but ok, Big balcony but most of all - Fabulous Views. Daily housekeeping woman absolutely delightful. 98% of the fellow visitors were fabulous Mexican families on Vacation; watching and interacting with them just brought joy to my heart. Being right next to the small boat marina (yes on rare occasions a tour ship) made those daily strolls so much fun and enjoyable. Great restaurants in walking distance as well as the tourist walkway into the little town of La Cruciate (15 minute walk). Breakfast were also very good. Staff were warm and wonderful ……… however English speakers were rare. Want to Experience Local Culture? Then YES - go there. Oh - the three pools were wonderful & the private beach was not bad. Oh and absolute silence after 10:00 - No street noise; woke up to birds signing.More

Hotel Marina & Resort appreciates your preference We are pleased that you have had a pleasant stay, your comments make us grow and improve our service. We hope to have your visit soon

Report response as inappropriateThank you. We appreciate your input.
This response is the subjective opinion of the management representative and not of TripAdvisor LLC
See all 156 reviews
Nearby Hotels 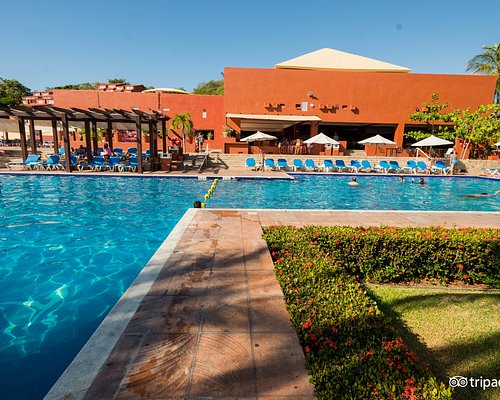 All Inclusive
Las Brisas Huatulco
US$178 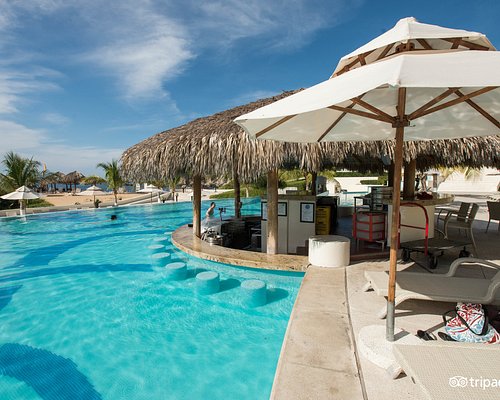 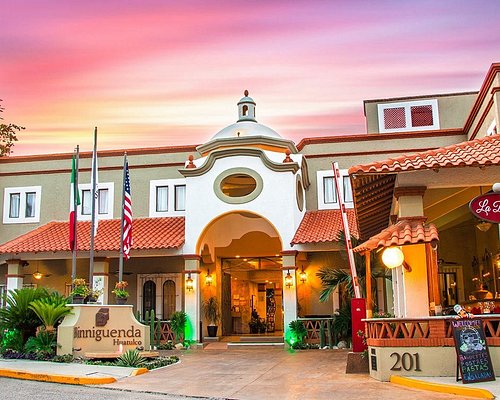 Taking safety measures
We compared the lowest prices from 17 websites
Camino Real Zaashila
Booking.com
View deal
Priceline
US$145
Trip.com
US$107
eDreams
US$145
View all 15 deals from US$107
913 reviews
4.6 km from Marina Hotel & Resort

Trip.com
View deal
Free cancellation
Agoda.com
US$88
ZenHotels.com
US$72
getaroom.com
US$89
View all 6 deals from US$72
863 reviews
2.8 km from Marina Hotel & Resort
We compared the lowest prices from 6 websites
Quinta Real Huatulco
US$205

Expedia.com
View deal
Free cancellation
Pay up to 12X
Booking.com
US$205
ZenHotels.com
US$176
Priceline
US$193
View all 17 deals from US$176
266 reviews
3.7 km from Marina Hotel & Resort
We compared the lowest prices from 17 websites
Holiday Inn Huatulco
US$71

We’ve been here just 1 day & I’m SO MAD I prepaid for a week on Expedia. We want out!!! We prebooked & prepaid on Expedia a month ago as part of our 5 week long Huatulco/Oaxaca vacation. Previous 2 hotels were excellent then we arrived @ Marina Resort Hotel. The receptionist does not speak any English & could not find our reservation. After 1/2 hour of trying to explain to her a nice lady in the lobby who spoke Spanish intervened to help us. The receptionist was in the process of turning us away without a place to stay. Turns out our reservation WAS on the 1 page list of reservations the receptionist had been spinning round & round for the last 3/4 hour. That settled we were assigned a room & were startled when we opened the door. THIS was a SUPERIOR Double c/w balcony!!!! Yikes!!!! Nothing like the website pics. Ugly & uncontrollable!! Grey thin linens, poor a/c, balcony looking at the next Hotels wall. No elevator... a 6 floor hotel with stairs only!!!! We’re 70 years old!!! Haven’t seen maid service yet.... no Wi-Fi in rooms, only in the Lobby ( if you hold your phone in your right hand & lift your left leg.... OR sit in the hateful receptionist’s lap). This Hotel has ZERO customer service and THEY DON’T care. This Hotel is NOT what they present on their Website. IF WE HAD NOT PREPAID we’d have left already.... probably never prepay on Expedia again..... DO NOT BOOK THIS HOTEL!!!! There are others nearby that are good/great. THIS IS NOT!!!! And certainly do not prepay!

This review is the subjective opinion of a TripAdvisor member and not of TripAdvisor LLC
shonac868
Cabo San Lucas, Mexico
3538
Reviewed 17 February 2019 via mobile
Do Not Book! The Terrible Reviews are Correct!

- dark dingy room with ants crawling all over the towels in the bathroom, found some in my bed
- room had to be sprayed
- air conditioner leaked mold and water over my friends bed the day we arrived.
- asked for a reading lamp because the one with the red lampshade made it impossible to read and very poor lighting in room. They removed the lampshade.
- air conditioner finally quit and leaked all over the bed
We got moved but not until we were shown 5 rooms we couldn't have and finally moved into the 6th. We had lost three days of our holidays by this time and it was now day 6. No wifi at all in the room even though it is advertised but it was a better room. Not an upgrade though! Lol We didn't think it could get worse.
- Day 8! The smell of sewage permeated the whole room. Ran the shower to see if it would help. Had to keep the doors open to air out the room.
- Day 10 the sewage smell was stronger than ever. They poured some caustic chemical down the shower, left the doors open to air out and another wasted day for us.
- had been contacting the Expedia Rep all along and got told by the local rep to just give a review?
- we packed up and moved to the Binneguenda for a break. Our room was paid up at the Marina so left our cooler there. Went back and cooler was gone, room cleaned out.

The only redeeming feature at this hotel is the pool. If you have mobility issues, there are stairs everywhere. They really do not care about Canadian tourists. We were not the only ones that had issues. Asked for a fridge because we were supposed to be there for over two weeks. Was told we could have one for 200 pesos a day!!! Friends at a different hotel were given one free for their room.

We were overcharged through Expedia, (shame on us) and tried to make the best of it but I ended up with a severe bronchial infection from the moldy a/c and the chemicals from the backed up sewer.

The beach is a short walk. They have a roped off area in the water that you share with the local boats and their gasoline and garbage. The lounge chairs by the pool are all wood with no cushions. There are no Do Not Disturb signs for the rooms, no coffee makers, no hair dryers! I could go on!

Save yourself and book anywhere else!

We booked this hotel before reading the scathing reviews, really glad we did.

First room they took us to was not acceptable (no view and dark on lower floor) next room not much better but last room was perfect (room 623) (no lift so this room up six Flights of stairs and we feeling fit) we had a great view of marina, We LOVED this experience! It’s a great place for the price! We paid $60nz per night (off season).

Staff have been superb and room service food all good.

Haven’t seen a scorpion as someone mentioned previously, and wifi good. La Crucecita cable tv has ONE English movie channel so doesn’t matter where you are I think..... well maybe secrets hotel has more but then you are paying prob 10x the price.

The pool is pristine. There is continual unobtrusive maintenance happening around the place so they have it looking good!

The aircon in our room so quiet we were not sure it was on. ALL GOOD.... in fact excellent!

This review is the subjective opinion of a TripAdvisor member and not of TripAdvisor LLC
3kiwi3
Guelph, Canada
817
Reviewed 30 March 2018
underrated

I'm writing this review primarily because I had a really nice 2 week stay at this hotel, It is reasonably priced and is a great value. The staff is friendly and do a great job. When I had trouble with my air conditioner I mentioned it at the front desk on my way out for my mornings activities. When I returned at 2:30 it was fixed. that's pretty good response time . The hotel has a good location close to local beaches and restaurants. It's only a block away from the Santa Cruz town square which is a great place to sit and have your morning coffee. The Hotel has a nice restaurant and an agent that can line up activities for you, but they're not pushy which is nice.

The Hotel Marina Resort isn't Sandals, but its a nice budge hotel . If you prefer to spend your money on things to do not on a overpriced room I recommend this hotel

This review is the subjective opinion of a TripAdvisor member and not of TripAdvisor LLC
WaMan1954
Fort Saskatchewan, Canada
188
Reviewed 13 July 2017 via mobile
Awesome Condo

Very clean and tidy. Staff are all exceptional and extremely helpful and polite. Condo was great. TAXI's plentiful and inexpensive to use. Beautiful beaches and plenty of places to eat. The town centre has a gazebo type coffee house called Cafe Huatulco. Great breakfast menu and the most delicious Mexican coffee in Huatulco.