eDreams
Orbitz.com
Booking.com
View all 11 deals
* Prices are provided by our partners, and reflect average nightly room rates, including taxes and fees that are fixed, known to our partners, and due at time of booking. Please see our partners for more details.
John C
San Jose, Costa Rica
1214

We stayed 2 nights in this hotel with 2 people we were travelling with - we shared a 2-bedroom apartment. During our first night the AC stopped working and the room was unbearably hot. We reported the problem the next day - their solution was to bring a new remote for the AC. After complaining 3 times they agreed to move us to the next door, identical apartment. By this time it was 10 in the evening and we needed to be up by 5:30 the next morning for an early departure. We couldn't beleive it that they insisted on waking up our friends who were by then asleep in their room - complaining that we'd only paid for one apartment. The fact that next door was empty anyway and that we only had a few hours to go didn't seem to make any difference. There was no word of apology for the inconvenience to us. It was a miserable stay - the staff were horrible and I would advise anyone not to stay here.More 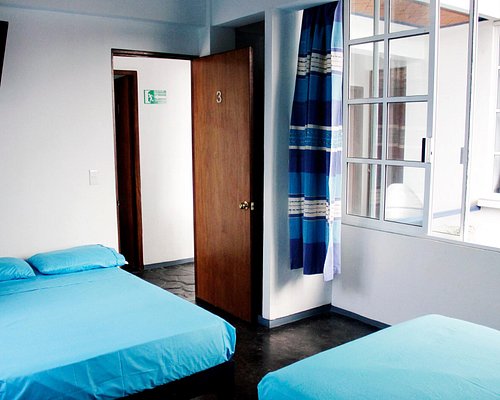 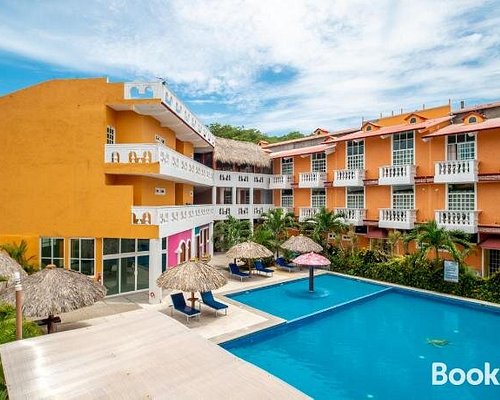 This old hotel has great WiFi, a nice pool and efficient if noisy air conditioner. Other than that you would be better off in a tent. Front desk, worse than inefficient. Took our reservation documents and refused to return them until later in the night when he came knocking at the door. Flatly refused to provide a light bulb for fixtures without. The room had no chair, just the desk. Got a pool chair for that. The room really needed a good cleaning and painting. The bathroom was filthy. Not only had no one cleaned around the toilet in years, but it was black. The door frames were rotting away from leakage, the sink also leaked as did the drain underneath. The balcony doors did not close properly, the hole in the concrete for the latch was worn away. On the up side, the location across from the park was nice as was being next to the church where there is nice singing day and night. The included breakfast was also disappointing. A big breakfast self serve buffet that was cold and messy. Although we stayed 3 nights, we chose to go out to a restaurant to eat because this offering was was so bad. The worst part is that this hotel was shockingly expensive. This year we travelled for a month in Mexico, moving every 3 days, and this was the worst and most expensive place we stayed.

This review is the subjective opinion of a TripAdvisor member and not of TripAdvisor LLC
Irma V
Burlington, Vermont
147
Reviewed 10 January 2017
A good price for a comfortable enough hotel.

Front desk: not very efficient
Rooms: good size, comfortable but in great need of sun blocking curtains.
Cafeteria: don't get the breakfast plan, it's a small crowded place. Have a coffee right outside (it's the best), and have breakfast next corner, at "Terracota" (mmmmhhhhh)
Location: right on the center of La Crucecita, the second downtown in Huatulco.
Pool: small, cold, not really appealing...plus their loungers are decrepit and falling apart.

Room tip: Rooms 216-221 MUST be avoided. The noice and street lights from the bar across and everywhere won't let you sleep at all.
Ask Irma V about Hotel Azul Sirena
3  Thank Irma V

Report response as inappropriateThank you. We appreciate your input.
This response is the subjective opinion of the management representative and not of TripAdvisor LLC
LillyOnTheMove
Tucson, Arizona
103
Reviewed 4 October 2016 via mobile
Nice little super cheap place

My boyfriend and I stayed here for two nights as we explored Huatulco. It is not on the beach, rather it is in the center right next to the little park/plaza.

This is a hotel that doesn't see a lot of foreign tourists, but I was just fine here. The beds are very comfortable, much softer than the normal rock-hard beds in Mexican hotels. A few of the tiles in the bathroom ceiling were a little beat up, so the hotel shows a little age, but everything is clean so it's no big deal. There is no bottled water in the room, which is strange, but there is an OXXO (convenience store, like 7-11) less than a block away, so we just bought our own.

We paid the equivalent of $25US per night. At the front desk, they quoted a rate of about $40 per night, but they honor the rates you find on the Internet, so be sure to look around online a bit before you stop in.

Report response as inappropriateThank you. We appreciate your input.
This response is the subjective opinion of the management representative and not of TripAdvisor LLC
LKeesling
Veracruz, Mexico
8538
Reviewed 29 October 2015 via mobile
Ok hotel

I arrived to this hotel for a one night stay and was ok. It is and old building and it shows which can make it nice colonial style but needs some updating, specially the bath rooms.

Employees were friendly but not very efficient in doing their job.

It is located in downtown Huatulco not very close to the beach but great if you want to know the place for an affordable price, there are shops, bars and restaurants at a walking distance.

Over all it is ok to stay there just don't expect the facilities of a big resort, it is more for alternative traveling.

Report response as inappropriateThank you. We appreciate your input.
This response is the subjective opinion of the management representative and not of TripAdvisor LLC
DINOMADIC
San Diego, California
2316
Reviewed 21 September 2015
Pretty Much Expected

I've stayed here on surf trips to Barra de la Cruz, which is pretty now ruined these days. Thanks Rip Curl. The hotel is one of the better places to stay unless you keep traveling to one of the all inclusive resorts. It's in a great location - cool town square. There is nothing fancy to this place, but the beds were rock hard. The hardest beds I've ever stayed in. Regardless, I'd consider staying again. Place was clean and staff friendly. The food at the restaurant was really good. Got Monty's revenge from one of the other restaurants in town so be careful what you eat.

Report response as inappropriateThank you. We appreciate your input.
This response is the subjective opinion of the management representative and not of TripAdvisor LLC
View more reviews
PreviousNext
12…
<script type='text/javascript' crossorigin='anonymous' async onerror='__scriptLoadError(this,true);'