Show less
Trip type: Travelled as a couple
See all 323 reviews
Nearby Hotels 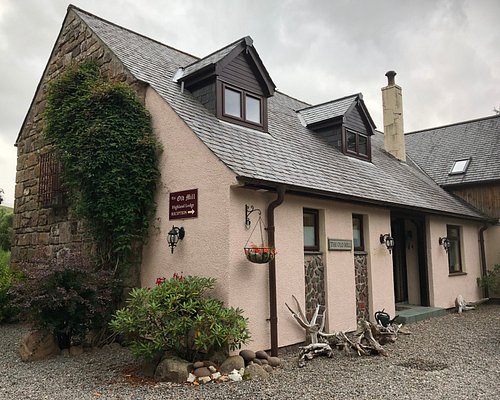 Expedia.com
View deal
Free cancellation
Reserve now, pay at stay
Hotels.com
US$167
Travelocity
US$167
Orbitz.com
US$167
View all 9 deals from US$167
52 reviews
0.2 km from Loch Maree Hotel
We compared the lowest prices from 9 websites

Expedia.com
View deal
Free cancellation
Reserve now, pay at stay
Booking.com
US$340
Hotels.com
US$576
eDreams
US$340
View all 12 deals from US$340
353 reviews
11.1 km from Loch Maree Hotel
We compared the lowest prices from 12 websites Had a great stay. Very warm welcome, space to store our bikes, loads of delicious food in a beautiful dining room.
Slept really well and the water flows through peat which is why it’s a yellowish tint. Thank you very much.

we had a great stay at Loch Maree last week. Warm welcome and the most beautiful place to stay. Room was very comfortable. The water is from natural springs and my hair has never been so soft. Thankyou for a lovely stay and we will be back.

This review is the subjective opinion of a TripAdvisor member and not of TripAdvisor LLC
Erinm77777
Motherwell, United Kingdom
22
Reviewed 8 June 2021
Please read the reviews before booking!!!

Nice location. We had multiple problems -

Turned up at the hotel to a frosty welcome from the owners wife who basically looked at us as if to say ‘why are you here’. It was 7.20 and we were told dinner is only between 6-7 despite this not being written anywhere on their website - in fact the site says ‘where all residents can dine whether they book or not’. she said we could pick a main course but it would be on the table in 5 minutes. Sat at the table in the ‘restaurant’ which is also 3 tables in the reception, and there were dead bugs all over the window ledge at the side of our table so we moved which she was quite irritated by. Dinner was ok at best but had to chase to get a drink as we were never offered. Two steak pies and small glass of wine was £45. Whole hotel had an unpleasant feeling so we were in our rooms by 8pm. Spent the whole night feeling sick… not sure if because we ate the dinner so fast to get out of there or because it was ready in 5 minutes…

No wifi other than at reception and TV only had 4 channels. Beds only had one pillow. No shower but just a wee shower head attached at the taps and no shower curtain so you have to sit in the tub to wash which was not easy for my 6’’3 boyfriend! Water was either freezing or scalding. Hot water coming out the cold water tap… and the hot water tap.

Overall we did not want to hang around in the morning for breakfast. We checked out and at that point mentioned our concerns to the landlady, stating that we felt the price compared to other hotels in the area was too much for what you get there, and we were told ‘well you chose to stay here’. Honestly never seen customer service like it in my life. We mentioned about all the dead bugs in the restaurant, and were told there wasn’t dead bugs just dead midges??? and there’s no point cleaning them as it’s next to a loch and they just come back.

A shame as a hotel with potential and incredible surroundings/history but would avoid at all costs.

Don't be fooled by the lovely historic building and lake-side spot this hotel occupies. Upon staying here, it's as if the owners are doing everything they can to run this place into the ground. I really hope they take note of the numerous negative reviews on this site and do something about it, because it seems like this could be a great hotel.

A (very) reduced list of problems encountered, when I visited in 2019:

- "Check-in time ends at 6pm", according to my documentation, meaning I had to abandon a few plans for my trip just to get there. This was far earlier than any other hotel or B&B I had been to on my Scottish trip - in fact far more restrictive than any hotel I've ever stayed at.

- Staff were basically just milling about, I thought they were guests initially because they didn't seem bothered about attending to anyone. They weren't necessarily rude to me as others on this site have commented, but they didn't seem particularly invested in running their hotel.

- The bed was disgusting. The sheets were full of holes and had solid clumps of unwashed detergent stuck to them. Detergent is an irritant, so it wasn't particularly safe to sleep in this bed!

- The amenities were disgusting - the kettle was half-full with stagnant water. I shudder to think how long it had been in there.

- The shower was unbelievably filthy. What looked like years of grime and dirt had collected in the seals. I'm not sure you would have stepped out of the shower cleaner than when you went in.

- The bar was 'open', only in the sense that if you were there and the manager lady also happened to be there, you could buy a drink. Otherwise, you're out of luck.

- The room was cold. It wasn't even a particularly cold night.

I left this place feeling unwelcome, unclean, and cheated by having to re-arrange my plans for the privilege of staying in this hellhole. Avoid.

Room tip: The best rooms can be found in a different hotel.
Ask Mojave89 about Loch Maree Hotel
1  Thank Mojave89

This review is the subjective opinion of a TripAdvisor member and not of TripAdvisor LLC
257justinep
Heybridge, United Kingdom
2
Reviewed 31 May 2021 via mobile
Rude and unwelcoming

Hotel in a beautiful location, we arrived to check in around 7.20 following a long day's drive. We were greeted by a grumpy lady who prompted told us we were late and dinner was only served till 7. This is not mentioned anywhere on the booking and 7.20 is by no means a late dinner,we were told if we want to eat we would need to place our order and eat immediately. The woman proceeded to be rude throughout the dinner, was clearly rushing and even said this is what happens when guests are late and made us feel very unwelcome and like we were being told off at school.

Food was average but very overpriced.

Decor was dated, bed was comfortable but the room was far too hot. The sink taps are on the wrong way and no shower, the shower head was just loose.

Would not stay again and definately not worth the money.