US$124
US$109
Reserve now, pay at stay
View deal
Expedia.comUS$109
eDreamsUS$124
Orbitz.comUS$109
PricelineUS$124
CheapTicketsUS$109
TravelocityUS$109
View all 10 deals
* Prices are provided by our partners, and reflect average nightly room rates, including taxes and fees that are fixed, known to our partners, and due at time of booking. Please see our partners for more details.
Marina Z
1

See all 111 reviews
Nearby Hotels 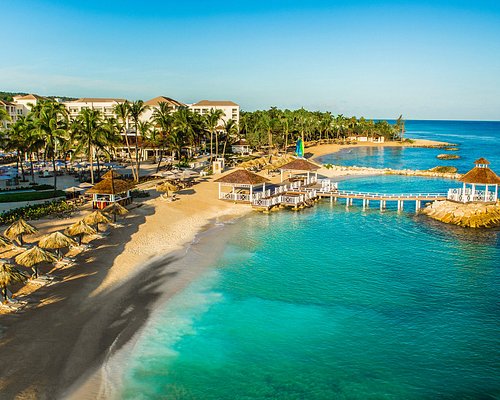 Taking safety measures
We compared the lowest prices from 18 websites
All Inclusive
Iberostar Rose Hall Beach
US$307
Booking.com
View deal
Reserve now, pay at stay
Expedia.com
US$307
Trip.com
US$257
Destinia.com
US$310
View all 15 deals from US$257
6 037 reviews
17.5 km from Caribic House

This location is safe and wonderful! The beach access is just across the street and there are plenty of places to eat within walking distance. Karl was so kind and easy to get in touch with if we had any questions about the area we were staying in and things to do. I would definitely recommend this place!

This review is the subjective opinion of a TripAdvisor member and not of TripAdvisor LLC
ElenaPach
Chicago, Illinois
38
Reviewed 9 September 2018
Amazing location!

Very nice room, simple but clean and has everything we need. Location is absolutely fantastic, you are in a middle of everything, 24/7 security, and very helpful girls on front desk. 5 min drive to airport and one minute to Doctors Cave beach - best beach ever. And supermarket is right next door with fresh Jamaican patties! The hotel is under new management so rooms getting fresh paint, coffeemakers, new bedding and other nice upgrades. Definitely will stay again

This review is the subjective opinion of a TripAdvisor member and not of TripAdvisor LLC
MARIA CAROLINA T
134
Reviewed 31 August 2018
If you have another option… go for it!

The positive thing: hotel with great location, in the heart of Hip Strip, and with a good price – not cheap, but good comparing to the other hotels in the area.
Now…don’t know where to start listing the problems. It’s clean, but no maintenance at all – there were lamp holders without lamp, for example. The AC worked but the people from the hotel couldn’t find the remote control! So we had to turn it on and off through a button in the wall but couldn’t change the temperature, that was settled for something like 18 degrees. So either it was too hot or too cold. As soon as we accommodate ourselves in the room (in the 3rd floor, with a snail stair), we realized there were no curtains (imagine the sun of August in Jamaica!). A person from the hotel arrived with them kneaded in hands in order to apply them, but unfortunately it was much shorter than the window, and so at 7am we had already the room clear as outside. In the bathroom, a window opened to the corridor with no curtains, in which anyone could see us inside! We had to put a towel to close it! And last… some rooms are separate by a door, and you can hear basically everything that happens in the room besides yours (we could also hear the sound of the luggage’s zipper of the other guests!!)
But the real problem for us was the service. In the last day, we had to go to the airport by 2pm, and the check out was at 11am. Being our last day in Jamaica, we wanted to enjoy until the last second, and so we asked for the possibility of doing a late check out (possibly paying for it!), in order to stay in the beach until the time the taxi that would takes us arrives. I thought that it wouldn’t be a problem, as we were basically the only room occupied of the hotel (we saw only the room besides ours occupied, and only the first night. All the others we could see their doors open). But for our surprise the responsible for the hotel said NO. Not because new guests were arriving or some other reason… a simple no! That the only thing he could do was to let us leave the bags in the lobby (well, thanks). And so we had to take the shower in Doctor’s Cave beach!… 30 meters from our hotel (!), that even when we came back to get the luggage… there was NO ONE hosted (!!!). Service is everything, and Caribic House should understands it.

This review is the subjective opinion of a TripAdvisor member and not of TripAdvisor LLC
Eli J
Atlanta, Georgia
21
Reviewed 19 August 2018 via mobile
Boo!

After staying three nights at the caribic house with no issue, my girlfriend and I decided to stay another after our trip to Ocho Rios. This turned out to be a terrible mistake. When we arrived, the front desk did not have record of our reservation due to the hotel apparently changing ownership the day before. We told them the room description which was promised to us three days prior, a garden view with a kingsize bed. We then proceed to pay the $67 bill with a credit card, which we used our first stay with no issue, three days before. We were told that the card machine was broken and would not be fixed. We were then told that we must pay in cash. We were directed to the atm across the street, which has a $5 service charge, which they refused to cover. After giving them $70 in cash, they let us know that they didn't have change, but would get it to us at a time. We were taken to our room, which was equipped with two twin beds. When we told them this was an issue, we were told that the only way to get a room with one kingsize bed was to pay $90. Although this was a mistake on their part, they did nothing to help. We ended up laying in our separate twin beds, although there was no sleep due to the couple next door beating the headboard against the wall all night. I suppose they got a bed large enough for two? I didn't get my change until checkout. I paid in USD and was given $J350 as change, instead of $3. They knew that we were flying back that day and had no use for jamaican currency, still no consolation. Stay somewhere else.

This review is the subjective opinion of a TripAdvisor member and not of TripAdvisor LLC
Larysa_St
Chicago, Illinois
1418
Reviewed 27 June 2018
Great place!

Very clean, friendly stuff, free WiFi, amazing location! Doctors Cave beach right across a road, Starbucks, tons of restaurants and shops around. Room is kind of old and simple but it is great budget place