Expedia.com
Hotels.com
Travelocity
View all 15 deals
* Prices are provided by our partners, and reflect average nightly room rates, including taxes and fees that are fixed, known to our partners, and due at time of booking. Please see our partners for more details.
TravelingKornfelds
208

Great location, but best to avoid this property

We were very optimistic about this property as we love historic settings and the combo of proximity to Willemstad and parking (so that we could explore the island) was appealing. However, the place is quite literally falling apart with chunks of furniture and bathroom tile tumbling down. The pools and grounds are poorly maintained, the wifi is non functioning, and the hot water in one of our rooms was never fixed. One of our tubs had the intimate hairs of a prior guest somehow permanently affixed to the ceramic and eight days of housekeeping did nothing to dislodge it. There were stickers in the rooms telling us not to drink the water (despite Curacao having a modern desalination plant). One can only assume that this was because the published stories of the hotel not being able to pay its water bill were true and caused it to use some alternate unsanitary source. The breakfast was mediocre and sparse, some of the staff quite unfriendly, and the AC in the rooms could not be adjusted. In summary, a beautiful setting with great potential but better avoided until new management rebuilds and refreshes it. More

We thank you for your comment and are glad to hear that you love the historic setting of the hotel.

Your comments regarding the grounds and Food and beverage and the employees will be addressed for proper follow-up up.

We apologize for the inconvenience you experienced,

Report response as inappropriateThank you. We appreciate your input.
This response is the subjective opinion of the management representative and not of TripAdvisor LLC
See all 290 reviews
Nearby Hotels 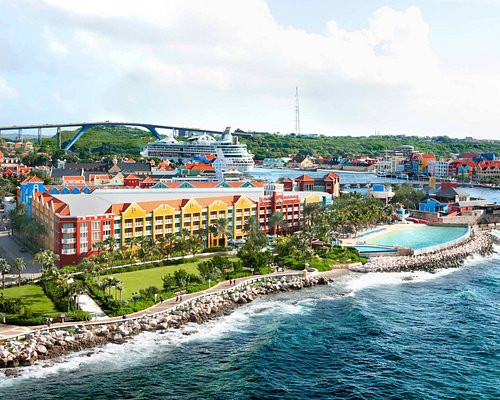 Far from the best beaches you need to rent a car for access. Access to the commercial center in punda and otrobanda is easy, just a few minutes walk with good bars and restaurants. The hotel is divided into areas, I stayed in the Bolivar Pool, I do not recommend the room 237 (?), Upper level. The stair railing is broken in several places where there is a risk of falling. The place has a careless aspect to the details that make a difference to your stay, as well as an evening show in a hotel behind the room with electronic music that makes it impossible to sleep on Fridays and Saturdays. Do not stay in this area unless you like a lot of noise. On the plus side, the hotel provides a transfer to Kura Hulanda beach club in sabana westpunt a wonderful beach, don't miss it.

Thank you for sharing your experience during your stay, and that you enjoyed the good bars and restaurants within walking distance from the hotel.

The Hotel is located in the center ow town and therefore it might be a little bit noisy due to the active nightlife in the area.

The Kura Hulanda Lodge westpunt is a quiet hotel located at the far end of the island, and we offer a daily shuttle to and from town so guest can enjoy the peace as well.

We will pass your comments for proper follow-up.

Report response as inappropriateThank you. We appreciate your input.
This response is the subjective opinion of the management representative and not of TripAdvisor LLC
Caatje67
1
Reviewed 24 September 2019
Jaz nights and barbeque

Was very impresed by the quick assistants and support before and during our stay.
Please ask for the daytime Manager by the name of Danielle she is very good along with all the others . They actually clean the room every day and make sure all is well.

Room tip: We stayed on the west side and liked it.
Ask Caatje67 about Kura Hulanda Village & Spa
Thank Caatje67

Thank you for sharing you comments with us.
We are glad to hear that Danielle assisted well and that your room was cleaned, and we will surely pass your comments to our staff.

Hoping to have informed you accordingly and looking forward in welcoming you back in the naer future,

Report response as inappropriateThank you. We appreciate your input.
This response is the subjective opinion of the management representative and not of TripAdvisor LLC
DrGJH
London, United Kingdom
52
Reviewed 9 June 2019
Avoid

I cannot understand the positive comments - apart from a recent negative posting - about the Kura Hurlanda in Willemstad, Curacao. It is one of the worst hotels I have ever encountered and I have stayed in many hotels around the world.

I stayed there last week because I was at a conference in Willemstad. Here are some of the problems: my room (and others I saw) was dark and let in hardly any natural light; the shower produced a trickle of water (and when I complained, the person who came to repair it agreed that it was a terrible shower and did nothing to improve it); the shower leaked and made the bathroom floor slippery and dangerous; the front door was extremely difficult to close properly; the two swimming pools were filthy and full of leaves. Breakfast was at best mediocre.

This was apparently once a great hotel and is still very attractive on the surface. A local guide said that the hotel is now bankrupt - I suggest you avoid it.

Dear guest,
First of all our sincere apologies for the inconveniences you have experienced during your stay at our hotel. Guest satisfaction is very important to us and in order to take corrective actions with the room you have stayed we kindly request you to sent us a message with the room number. Thank you in advance and once again our sincere apologies.
Yours truly
Jeanette M. Bonet

Report response as inappropriateThank you. We appreciate your input.
This response is the subjective opinion of the management representative and not of TripAdvisor LLC
928ernestoz
Bogota, Colombia
6713
Reviewed 5 June 2019 via mobile
Average

Good location.
Pretty decent rooms.
BUT air conditioning does not work well. Even thought at maximum fan speed + lowest temperature set-up, the AC just not cooling the room.
I feel it's a little bit pricey.

Thanks for sharing your feedback regarding your stay.
Let us know your room number to make sure that the issue It’s fixed.
We are looking forward to see you again.
Regards

Report response as inappropriateThank you. We appreciate your input.
This response is the subjective opinion of the management representative and not of TripAdvisor LLC
FlyStevenW
Seattle, Washington
86
Reviewed 22 May 2019
TERRIBLE EXPERIENCE, No Response from General Manager

What a terrible experience. I travel internationally about 70% of the time, and this is one of the worst customer service experiences I've ever had anywhere in the world.

I stayed at Kura Hulanda on February 21. I booked two rooms and pre-paid my reservations via Expedia.

When we first checked in to the rooms in the afternoon, they were nice and cool. By the time we returned late in the evening, both rooms were not nearly as cool. One of the rooms was very warm and I could not get the air conditioning to work.

I called the front desk and reported the problem around 10pm. A maintenance man came to the room and tried to fix the unit. Soon a woman also showed up at our room, and together the man and woman tried to figure out why the air conditioner was not working. They replaced the batteries in the remote control, but the screen display was still very dim and they had a hard time reading it. After several minutes of trying to figure out the remote, they advised that it was now working correctly and left.

The maintenance man may have also made the room much more humid by activating the “Humid” feature on the remote control. The room was much more humid in the morning than it was when we checked in.

I also advised him that the air conditioner in the 2nd room was not working properly, and saw him write that in the notebook.

I also advised that the hair dryer in one of the rooms was not working, and he wrote that down in the notebook.

I called Expedia to report these problems, and when they contacted the hotel, they were advised that they were unaware of these problems, and I would need to write a letter/email of explanation to the hotel. I did so a couple of days after my stay, and did not receive any response. After one week, I called the hotel multiple times, and was always given the run-around, finally being told to re-send the letter/email to Yoyce Goilo Mendez, the Sales and Marketing Manager.

I did receive a response from Ms. Goilo Mendez, but she referred me back to Expedia, saying that "I can't refund a money that I didn't get directly". She did not even address my problems or offer any explanation/apology.

Expedia says that the hotel manager must authorize any refund.

Every time I called the hotel, I was told that the General Manager, Ms. Monet, was "out of town" and she never called me back or sent a response to my emails. At one point, I did receive a response from Expedia saying that my request for a partial refund was "refused by the hotel".

To date, I have spent nearly 20 hours sending emails, calling, and corresponding with the hotel directly and with Expedia with no result. Very disappointing and frustrating to say the least.