US$161
US$129
View deal
Free cancellation until 21/09/28
TravelocityUS$161
PricelineUS$144
Orbitz.comUS$161
View all 14 deals
* Prices are provided by our partners, and reflect average nightly room rates, including taxes and fees that are fixed, known to our partners, and due at time of booking. Please see our partners for more details.
315valentinn
Kilkenny, Ireland
23

We stayed for a week and had a truly 5 stars experience! The staff is unbelievable, reception is super helpful, restaurant staff good and bar staff really know how to make you feel welcomed. Jeta and Silviu stand out as the best but the rest were truly brilliant too!

The only room for improvement is on the booking system for the restaurants but I am guessing there is a bit of a problem with guests booking and not showing up...

One single bad experience was with the Marathon rent a car lady in the hotel, Rinata. She is rude and very unhelpful. Her attitude is in contrast with everyone else in the hotel, not sure why she is allowed to be there. The other staff seem to be aware as they pointed me to ring the sister hotel (Rodos Maris) and rent a car using Marathon ladies from there. It worked like a dream, Angeliki and Zlatka had a car ready for us next day!More

Dear Valentin , thank you for sharing online your recent experience at the Mitsis Rodos Village Beach Hotel & Spa.
We were delighted to read that you had such a great time with us and enjoyed your holidays.

We will congratulate the entire team for making your stay so special.

We look forward to welcoming you back again very soon.

Report response as inappropriateThank you. We appreciate your input.
This response is the subjective opinion of the management representative and not of TripAdvisor LLC
See all 2 911 reviews
Nearby Hotels 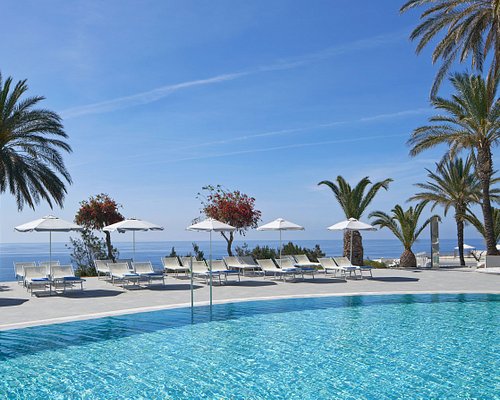 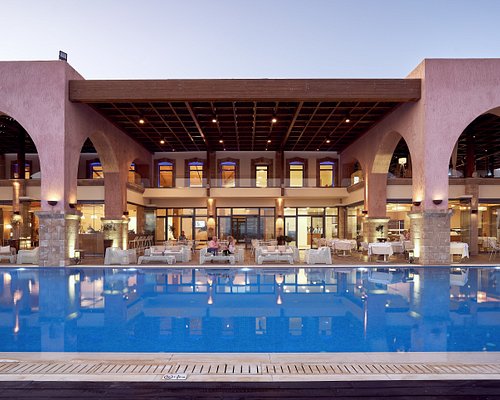 Our holiday has been so relaxing, the staff cannot do enough for you. A big thank you for all your hard work, especially Emma for sorting out the birthday surprise I requested.
The food is very good and the choices for dietary needs the best I have come across. So much choice in the main restaurant and a few other restaurants on site which are included in the all inclusive which where also excellent. The rooms where very clean and modern. We have already reserved it for my family next year. Amazing amazing amazing... we’ll be back.

Dear Helena, thank you for sharing online your holiday experience regarding your recent stay in Mitsis Rodos Village Beach Hotel & Spa. We are delighted that you enjoyed every aspect of your stay in our hotel. Our team will be very pleased by your nice words.

We do hope to welcome you again in our resort and offer you another memorable experience.

Report response as inappropriateThank you. We appreciate your input.
This response is the subjective opinion of the management representative and not of TripAdvisor LLC
jonass1312r
World
1
Reviewed 24 July 2021
Vacation at Rodos Village

The food was very amazing. I ate the best Steak at their Greek Restaurant. The service and waiters were absolutely friendly and amazing. Our Waiter Tasos was very kind and did everything to get us pleased. The Food and Service get 5 Stars. The activity there were awesome aswell. A lot of different types of Activities with very nice people. Also 5 Stars for that. The rooms were the only thing that will get 3,5 Stars. They were designed in a very old way and the baths were also very old.

Dear Jonas, thank you for sharing online your holiday experience regarding your recent stay at Mitsis Rodos Village Beach Hotel & Spa and for your nice review. We are glad that you had a great time here in our hotel and you enjoyed your holidays. Thank you for your kind words regarding our staff and our restaurants. They are much appreciated and make us try even harder.

It would be our honor to welcome you back in the near future and offer you another memorable experience.

Report response as inappropriateThank you. We appreciate your input.
This response is the subjective opinion of the management representative and not of TripAdvisor LLC
juliaK0104
45
Reviewed 20 July 2021 via mobile
The rudest and poorly trained staff ever!

This is the first 5-stars” hotel in the last 10 years where I encountered such a rude and badly trained staff at both the reception and reservation department.
I was flying to Rhodes and got a positive covid rapid test at the airport. I called to warn the hotel staff about the cancellation of my booking but the lady at the reception told me that the reservation department was closed and she could not help me.
They automatically charged me for my stay meanwhile and next morning when I called the reservation department, the lady there was extremely rude saying that she could do nothing cause I hadn’t cancelled it the day before. The funny thing is that I called to cancel the booking exactly the day before but the reception lady could not help me with that and reservation dept was closed. So what I was supposed to do?
More than that the lady from reservation dept started to yell at me and interrupted without letting to say a word.
I understood that there is no point to talk to her anymore and asked who I can speak to address my issue. She advised me to speak with a hotel manager. And afterwards it was even more ridiculous. I called the manger 6!! times via reception and emailed him. At the reception they were saying that he is either not at the office, either “he’s too busy, mam, he has too much stuff to do. If he has time and decides to call you, he will do it” (the exact quote from a gentlemen at the reception who was also increasing his voice and interrupting. Apparently, the staff at Mitsis thinks that’s a normal attitude to the customers).
So, I’m asking is Mrs. Cristina Mitsis, the President of Mitsis hotels, is aware of this kind of attitude from her employees and thinks that’s an appropriate behaviour for a respected 5-star hotel?

Dear Julia, we have to tell the truth and restore our online reputation that you damage via your review. Your online tour operator is widely known that there is a cancellation policy that has nothing to do with the hotel. By making the reservation you are immediately informed about this cancellation policy which clearly states that is a responsibility of the guest and not the hotel.

In other words YOU had to make the cancellation in time as we do not bear this responsibility cause these are the conditions set in which you placed your consent upon confirming the booking.

Our reservations manager spoke kindly and tried to explain you more than once how things should be done but you were furious and did not want to hear what she was trying to explain you in order to protect you. You finally came in our hotel after two days having cancelled your reservation and without being in our arrival list our employees gave you a room to stay. We known that the only reason you came was to offset the money you paid because you did not cancel your booking in time and your tour operator demands payment.

We had the right to take legal action against you and file a lawsuit for unjust and untrue facts being published online by you in order to receive as refund the day charged by your tour operator.

We are a hotel part of a company with 45 consecutive years in tourism and hospitality and we are urged to respond to what actually happened so to restore our reputation and inform our future guests with facts and not fiction. The easiest thing is to slander a company and a department supervisor because we did what our cooperation and contracts stipulates.

Throwing the responsibility on us while you did not follow the policy is not putting you in right side.

Having said the above we place our trust in the judgement of our inhouse, past and future guests to decide if our values and standards align with your comments or with our statement.


Report response as inappropriateThank you. We appreciate your input.
This response is the subjective opinion of the management representative and not of TripAdvisor LLC
N1882SSjuliaa
1
Reviewed 20 July 2021
Great animation, boring food

Great memories. The city is beautiful and the hotel itself is very impressive. Animation team was the best I've ever met (and im travelling a lot)! Lots of laugh and fun, both for children and the adults. We loved Klaudia and Pawel - great, devoted professionals!

However, I didn't like the food, it was rather monotonous and the dining room was sometimes crowded.

Dear Julia, Thank you for spending time to write a review about our hotel. We are pleased to hear you
enjoyed your stay with us. I will personally inform Klaudia and Pawel for your kind
comment.

We appreciate your compliments and hope to provide you another great stay in the
near future.

Report response as inappropriateThank you. We appreciate your input.
This response is the subjective opinion of the management representative and not of TripAdvisor LLC
piotrsK3888EU
1
Reviewed 20 July 2021
A lot of fun

Best holiday ever :) Hotel is absolutely beautiful, clean, huge pool and the food is delicious! But the best of all - the animators (Pawel and Klaudia). Creative, energetic young people, there was no chance to be bored with them! We ale already planning to come back next year :)

Dear piotrs, Thank you for selecting the Mitsis Rodos Village Hotel& Spa, Rhodes and for your great review posted on TripAdvisor. We are indeed very proud and glad that on the occasion of your visit our facilities and services exceeded your expectations.
Thank you again for your kind words and we hope to have the pleasure of welcoming you again soon.