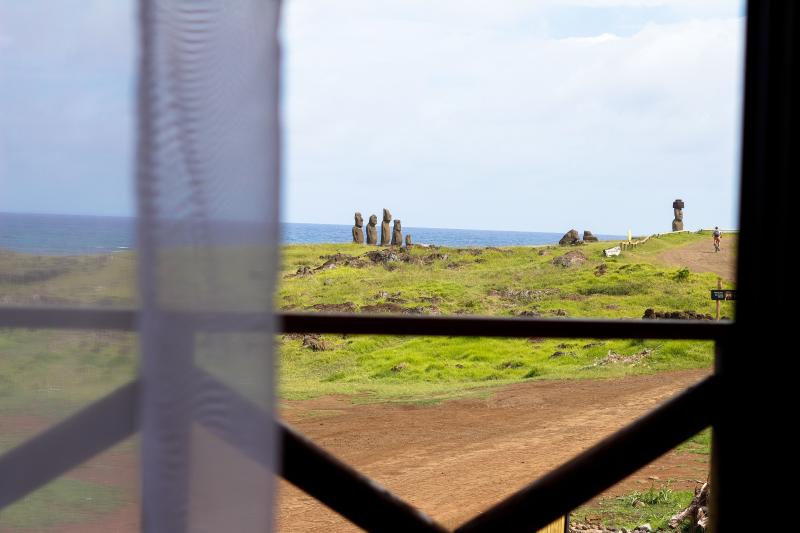 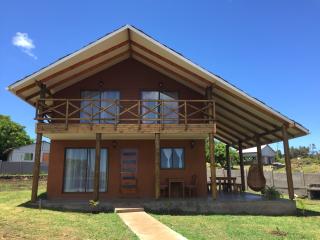 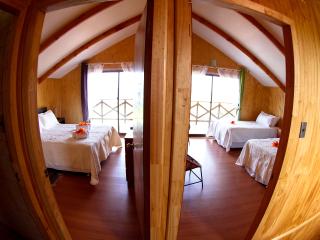 Very good - based on 13 reviews
Write a Review

Spent 5 great nights here and would highly recommend it.
The location is excellent - we visited Easter Island during Tapati festival and could reach most events on foot. Saved the need to rent a car and look for a parking space. The walk at night is rather dark but we used our smartphones as flashlights. The cabins are also steps for Tahai site which is a must location to watch the sunset. The cabin is new and has a living room, kitchen, one bedroom and a bathroom on the ground floor, good if you have someone in your group with difficulties climbing up the stairs. Upstairs there are 2 bedrooms. One with a queen bed and the other with 3 single beds. And another bathroom. The bedroom on the top floor have a balcony and great view of the ocean and the Moai. The cabins are cleaned every other day. There is no washing machine in the cabin, but they were willing to do our laundry for a very reasonable price.
On the down side – there is no air condition - can get really hot if you want to take an afternoon nap. At night the temperature is fine. wifi is not reliable - especially during Tapati festival events when there is great demand on the Island's limited bandwidth. But these are minor things. All in all a great place to stay

Date of stay: January 2017
Would you recommend this hotel to a friend?   Yes.
Was this review helpful? Yes
This review is the subjective opinion of a Tripadvisor member and not of TripAdvisor LLC.
Problem with this review? Thank you. We appreciate your input.

Stayed for a week in the house at the front of the property. This one has the free view of the ocean, the sunset and the moais (Ahu Tahai). Perhaps it is one of the best locations on the entire island.

Had a very different experience than the review by LostinSpace2010. Transfer from and to the airport by the very kind Odette, the housekeeper. Her English is as limited as our Spanish but enough to understand each other, and we used the app iTranslate. Complaints such as trash on the property (caused by stray dogs, they are harmless) were instantly dealt with.

The cabañas with 3 bedrooms, 2 bathrooms and kitchen are basic, don't expect (any) luxery. Beds good. Wifi falters sometimes. The outside seating area is very accommodating with a large picnictable, benches, and a swinging chair. You have your own bbq. Parking a rental car on the gated property is no problem. No real aircon but fans. All kinds of restaurants are within walking distance.
Staying here is expensive indeed, but that goes for all Rapa Nui. Keep in mind you have a house at your disposal: with all the freedom you want and the possibility keeping your living-expences on budget. We had a great week.

Date of stay: October 2016
Liked best: Location and self catering.
Liked least: nothing
Travelling group: Partner
Would you recommend this hotel to a friend?   Yes.
Recommended for:
Was this review helpful? Yes
This review is the subjective opinion of a Tripadvisor member and not of TripAdvisor LLC.
Problem with this review? Thank you. We appreciate your input.

59 helpful votes
“Location counts for a lot, but it's not everything...”
Reviewed 29 October 2016 for a stay in October 2016
5
people found this review helpful

The good - great location, right across from the ocean. The moai site also across the street makes a great spot for watching the sunset! We were met at the airport by a very nice woman who drove us to the property and checked us in and out - note that neither she nor anyone else associated with this rental speak any English at all, so download your translator before you arrive. Note the property manual on site (also only provided in Spanish) says checkout is by 1100 but we were told it was 1300 (1pm), which was nice but you'd need to know that up front.

The less good - wifi was weak and that's not really a problem as we only needed limited use, but it's *extremely* capped, which we were not informed about. We had no internet access for two days and nights, which was a pain for things like planning activities and routes, and checking in online before our return flight. The place is sold with wifi, I would call that misleading. Note that the kitchen has only the basics, in limited supply (as in 1 pan, 1pot, etc), so if you're considering cooking in-house, plan accordingly. We were in the middle cabin (they are staggered front to the back of the property) - unfortunately the front cabin completely blocks the view of the sunset, so see if you can arrange to have the front cabin!

The worst - it seems like there are staff (maybe?) living in one of the other cabins (there are three on the property plus a small office) right next door - there were tons of people coming and going at all hours, lots of noise, loud music, booze and weed, partying every night until 2-3am. Between them winding down at that ridiculous hour (every night for four nights) and roosters and dogs winding up at 0530 or so - no one in the house got much sleep. Also the shower upstairs leaks like crazy, the head itself is broken, and be prepared for cold showers - super hot for the first (literally) 2 minutes then ice cold. We are all for roughing it but at that price we expect a bit better on the facilities side. There was also no grill on the outdoor fireplace (at our cottage although there appeared to be one at the other cottage), and no tools for fire handling or cooking on a grill. No wood, and don't expect even bottled water to greet you - there was nothing. Also no soap in the lower bathroom (no bar or hand soap) or in either shower. Would be good customer service / appreciation to throw a couple bottles of water and maybe a small container of milk or juice in the fridge and some instant coffee or tea, given the usual late arrival time. Also we arrived home one morning after breakfast to no water - with no warning or explanation. It was back on by the time we returned from a day out, but it would have been nice if someone had knocked on the door or left a note (even in Spanish) to tell us what was going on.

Overall a very nice location, with nice people, but facilities and maintenance lacking given the price.

Date of stay: October 2016
Was this review helpful? Yes
This review is the subjective opinion of a Tripadvisor member and not of TripAdvisor LLC.
Problem with this review? Thank you. We appreciate your input.

2 helpful votes
“Best place to stay for Tahai moai sunset viewing!”
Reviewed 10 May 2016 for a stay in April 2016
2
people found this review helpful

The location was wonderful, facing the frothy sea and a few steps from the Tahai site (best place for sunset viewing behind a moai)!
The house is spotlessly clean, brand new and has all creature comforts (kitchen, TV, hairdryer...even a swingy egg chair!)
Our host was very kind despite the language barrier.
In one word: "excellent"!

Date of stay: April 2016
Liked best: The location
Liked least: Leaving Rapa Nui!
Travelling group: Other
Would you recommend this hotel to a friend?   Yes.
Recommended for:
Was this review helpful? Yes
This review is the subjective opinion of a Tripadvisor member and not of TripAdvisor LLC.
Problem with this review? Thank you. We appreciate your input.

1
person found this review helpful
Date of stay: January 2018
Was this review helpful? Yes
This review is the subjective opinion of a Tripadvisor member and not of TripAdvisor LLC.
Problem with this review? Thank you. We appreciate your input.
Previous Next
1 2 3
Updating list...
Do you own a holiday rental? List it here.

Looking for a place to stay in Hanga Roa?
View all 25 holiday rentals