US$191
US$162
View deal
Booking.comUS$176
PricelineUS$176
ZenHotels.comUS$191
View all 13 deals
* Prices are provided by our partners, and reflect average nightly room rates, including taxes and fees that are fixed, known to our partners, and due at time of booking. Please see our partners for more details.
stephburkle
3

We are a group of people and we stayed here for 2 days. We really had a great time. The buffet was very good but you have to go early because at 10 am there are a lot of people. The thermal spa was relaxing and all had fun trying all different areas. Everything was clean and would definitely go back.More

Thank you for taking the time to share with us your opinion about the hotelt It's fantastic to hear that you had a great time,enjoyed the buffet and the thermal spa.
We very much hope to be able to welcome you back again in the near future!
Kind regards.

Report response as inappropriateThank you. We appreciate your input.
This response is the subjective opinion of the management representative and not of TripAdvisor LLC
See all 1 080 reviews
Nearby Hotels 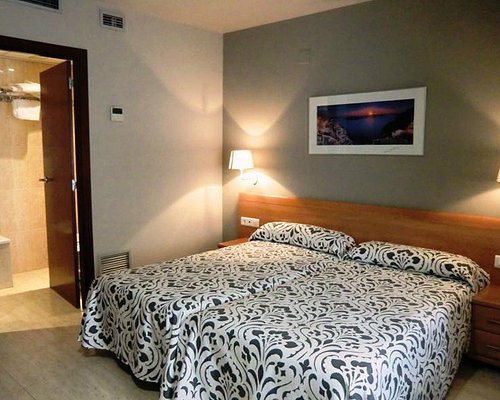 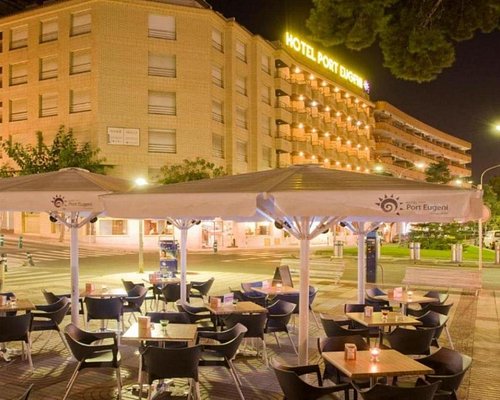 This is the second time in two years that I have stayed here and my wife and I still think that it's a great place to relax and unwind.
You are away from all the crowds on the coast (Cambrils and Salou are 10 to 15 minutes away by car if you feel the need) and it's just really peaceful.
The gardens are beautiful and a great place to have a stroll, the outdoor swimming pool is a perfect size for swimming and the food in the Sequoia restaurant is excellent.
For some strange reason the hotel doesn't seem to promote their restaurant which I don't understand because the food is really excellent quality and sitting out on the huge terrace in the evening looking out towards the coast makes it one of my all time favourite places to dine.
Excellent friendly service and the superior rooms are fantastic with good soundproofing which for me is very important.
Clientele are mainly Spanish which is fine by me and only a few of the staff speak English so a good opportunity to brush up on your Spanish.

Dear guest! Thank you for sharing with us the details of your stay and your opinion about the Hotel ,
We are proud and happy to know that you enjoed the whole experience in Hotel Termes Montbrio
We appreciate your comments about the gardens, Sequoia restaurant and the Hotel in general.
On behalf of everyone who forms Hotel Termes Montbrio team we would like to thank you!
We hope to see you soon again. Warm greetings!

Report response as inappropriateThank you. We appreciate your input.
This response is the subjective opinion of the management representative and not of TripAdvisor LLC
Curiosity616532
3
Reviewed 18 June 2019
Might have been good once but not now

Stayed here last week, arrived and given a room which when we got to it had not been made up, given another room which smelt very musty and clearly had not been used for a while. Went down stairs for lunch to be told the Cafeteria was closed for lunch and dinner as a conference group were using it.
Went to the Pool to find no pool towels, went to the Thermal spa, again no towels. asked at reception and was told you have to contact housekeeping for pool towels.
Around the pool was dirty, by the closed pool bar it was dirty with bird droppings and the tables and chairs were also covered in birds droppings, clearly the area had not been cleaned for sometime. when we sat by the pool we were constantly bothered by flies which were also a nuisance inside the hotel. The hotel has lovely gardens if only they
were looked after. Having now read previous TripAdvisor reports on the hotel clearly the management take no notice as reports back to 2017 make the same comments. Next time will stay at the Gran Palas at La Pineda which is a brilliant hotel and make no charge to guests to use the Therm Spa which is much nicer than that at Montbrio.
Sadly a very disappointing stay.

Dear guest! First of all, we would like to thank you for the comments and for having spent some time sharing with us your opinion. We take good note of the comments that have left us, which will undoubtedly help us to improve, and will be dealt with at our next management meeting.
Warm greetings,

Report response as inappropriateThank you. We appreciate your input.
This response is the subjective opinion of the management representative and not of TripAdvisor LLC
ibotnari
London, United Kingdom
8568
Reviewed 14 October 2018 via mobile
Really a 4* hotel

I do agree this is a 4* hotel and it is really pet friendly. From all pet friendly hotels this one was the first to offer pillow and plates for the dog. Clean rooms, huge bed. The champú was a bit strange, it didn’t make bubbles. If you stay at the hotel the price for Thermes is 22/adult and 11/child. Pets are for extra charge 18€/night. Breakfast buffet was fantastic for all tasts ( eggs, bacon, cereals, fruits, cheeses, hams, jams, different kinds of bread etc.)

Thank you for your time spent on commenting your stay at the hotel. We appreciate your feedback, and we are glad you enjoyed your time with us.

We hope to receive you again in an early future,

Report response as inappropriateThank you. We appreciate your input.
This response is the subjective opinion of the management representative and not of TripAdvisor LLC
cjsimons48
Argeliers, France
131
Reviewed 7 October 2018
Don't stay here

we booked for a spa weekend travelling by car, there was no one on reception who spoke english, disappointing for such a hotel,treated with indifference sadly, we were not given the right information with regard to the restaurant to use, we were not able to use the spa unless we paid a further 35 euro per persons when we had paid 343 euro for two nights, what a nightmare this hotel is, rooms were comfortable however, as we could not use the spa we thought we could use the outside pool, wrong... it was filthy, algae everywhere even though someone appeared to clean it daily. The lighting to the restaurant, outside from the hotel, was poor and could be dangerous, plants overgrown on it, someone needs to take hold of the condition of the hotel grounds. Sad experience in a lovely part of the country, expected more from a 4 star hotel and at this price.

Room tip: Don't be fooled by what looks like a super hotel, its not a four star.
Ask cjsimons48 about Hotel Termes de Montbrio - Resort Spa & Park
Thank cjsimons48

Good afternoon,
First of all thank's for commenting and punctuating your stay in our hotel. Recieve our apologies if the receptionists you met weren't able to speak inglish, most of our workers do so you were unlucky in this aspect.
We take seriously the maintentment of the hotel, so we apologize again if you came on some dates that it wasn't in the way it should be in a Hotel of our category. The Spa has an extra-cost because its Thermal water, and as you know it has an expensive maintenment.
We are sorry if we didn't fulfil with your expectations, we hope to recieve you again in our hotel to improve your experience.
Have a nice weekend,
Best Regards!

Report response as inappropriateThank you. We appreciate your input.
This response is the subjective opinion of the management representative and not of TripAdvisor LLC
klo705
Gloucester, United Kingdom
33
Reviewed 27 August 2018 via mobile
Awful

-Unfriendly staff
-Dirty paths and pool area
-Dont bother if you're vegetarian or vegan (charged €10 for half grilled tomato, 3 asparagus stalks, mangetout/green beans and 2 baby carrots)
-Nothing to see/do outside of hotel unless travelling at least 10 minutes by private taxi
-Very difficult if you're English and don't know much Spanish to be able to communicate or even read menus/leaflets/signs

Thank you for your comments and evaluation.
We send your comment to the Manager. We feel if we do not meet with your expectations. In the hotel we have the menus/leaflets in English.
We can not be held responsible for the villages around us.
Have a nice day and best regards,